Is there anything quite like a nice old-style hardware store — apparently indispensible, wonderfully incomprehensible (to all but tradespeople) objects traveling up the walls, inspiring thoughts of renovation, improvement or, at the very least, staving off disaster? Cold Spring’s C&E (Cretelli and Early, still proudly displayed on the awning) is one of those stores.

In fact, said proprietor Susan Early, “people come in looking for that hardware-store smell.” That they’re still coming into a fairly small shop on Main Street is a testament to the service, the stock and the knowledge found there, both in hardware and in paint supplies, the other 50 percent of the business. 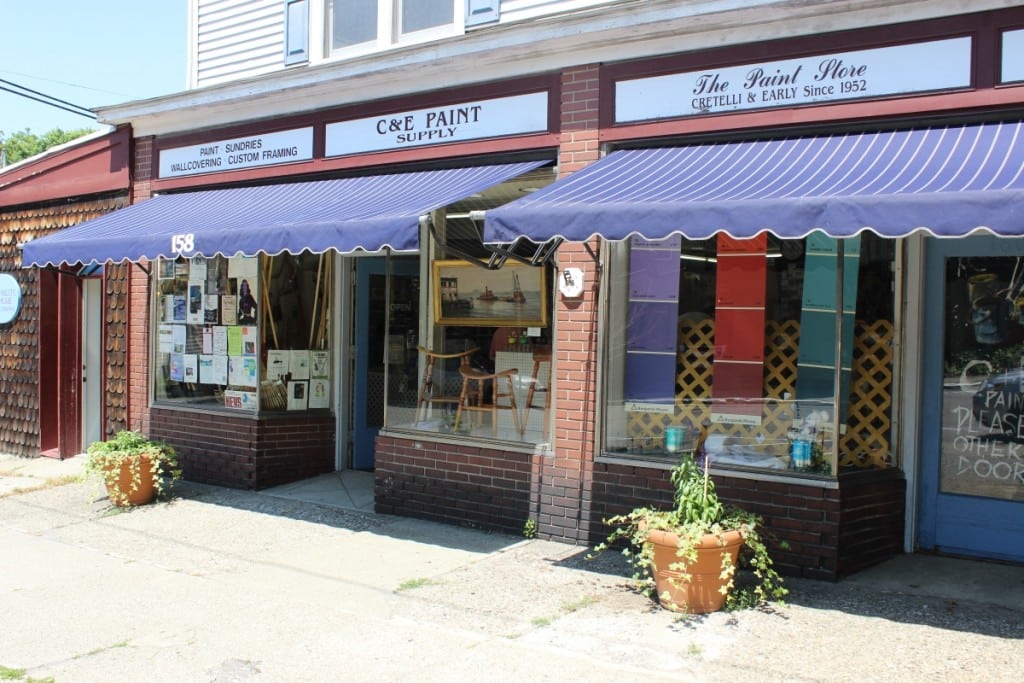 C&E stands for Cretelli and Early, still proudly displayed on the awning

People have been coming since 1952, when the business was formed by Early’s parents, Jim and Sadie Early, and her aunt and uncle, Bonnie and Jake Cretelli. Early’s father and uncle were both house painters, and they opened the store in part so they could get their supplies. Originally located above the former Powers & Haar Insurance building, across the street from the current location, they moved in 1955 and wound up purchasing the current building in 1983. That ownership is key, according to Early, to the store’s continued existence today.

In the early days, Jim and Jake would travel to the places where their paints were needed and mix the paints, by hand, combining lead and linseed oil and squeezing tubes into that mixture, on-site. It all had to be matched “by eye.” This changed with the arrival of the manual mixer, which is still displayed in the store.

Early is not certain when it arrived — “It’s not a new technology,” she said, noting that it has been there for at least 40 or 50 years. It was finally replaced by a computerized version about six or seven years ago, while “the old shaker, a Red Devil 1952, made it to 60 years,” Early related. 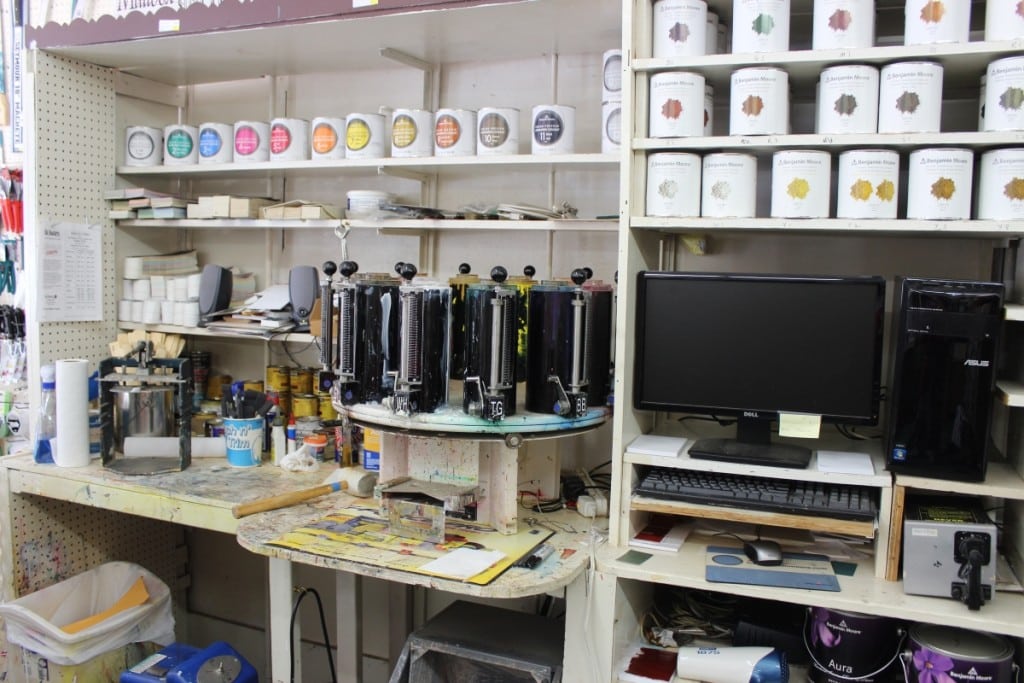 What color do you need?

The hardware hasn’t changed as radically, though stock does change with new items added per (Early’s cousin and son of Bonnie and Jake) Ed Cretelli’s philosophy, “If two people ask for it, I’ll get it in.”

Ed Cretelli and his wife Rose ran the store with Susan for many years, joining in when he retired from IBM until his illness intervened a few years ago; now Rose and Susan split the week. Although the sidelines of picture framing and screen repair ended with the passing of the founders, much of that era still remains, starting with the scale — regularly inspected — that hangs at the back of the store, where the contents of bins and drawers — nails, screws, etc., are still sold by the pound, surprising customers.

Drawer after drawer is labeled in a kind of construction poetry: toggle bolts, hex lag screws, wedge anchors, flare nuts. Early said they don’t sell as many clothesline pulleys and line tighteners as they used to, but staples are staples, and much of what sold in 1952 still sells now, from twine to cable ties, nozzles, multiple varieties of pliers, lamp harps, rust dissolvers, wire, wire and more wire, glues and locks and ratcheting cutters, measuring tapes, steel wool: They’re all here. 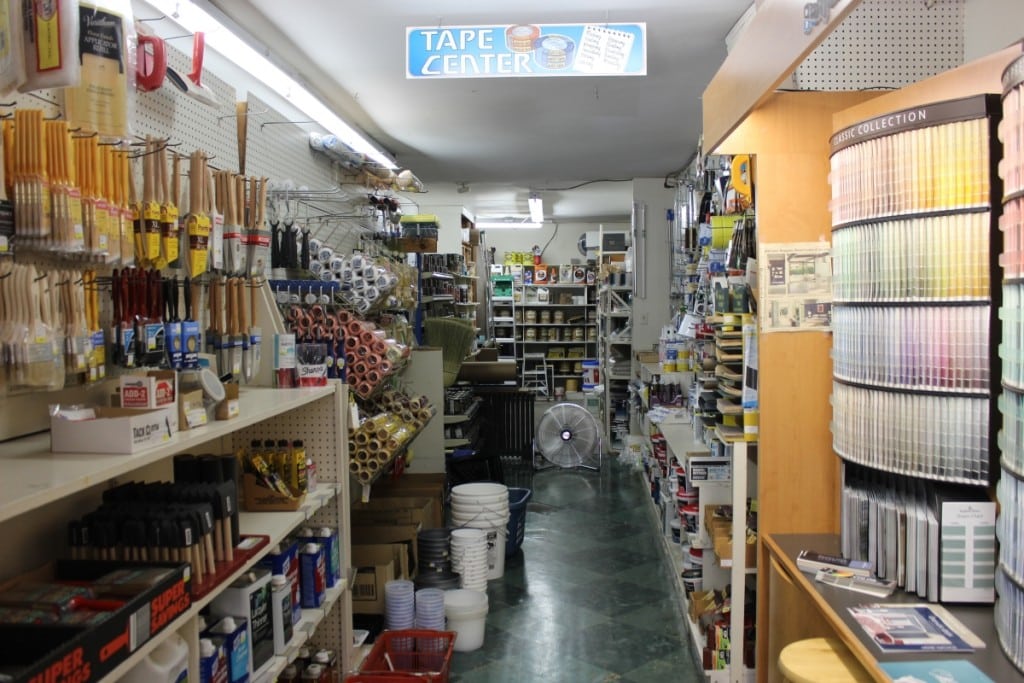 The paint and supply aisle

Early was basically born to the business, but she was “half and half about it in the beginning; I didn’t really want to work here,” she said, but “once I started, I stayed with it.”

Early and her colleagues have always been service-oriented. “Service is what we have to offer, although you’d be surprised at how a lot of our prices compare to the big-box stores. And here you can get in and out quickly, instead of searching for someone to help you. This is especially true for contractors,” she said. C&E does have many contractors as longtime customers but has the patronage of newcomer homeowners as well. “Newcomers make a point of trying to shop local; they’re determined to. It’s part of the reason they moved to a small town; they make a point of telling me.” 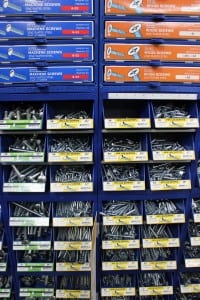 C&E has all your nuts and bolts

New homeowners are often eager to alter the colors on their walls, as are those who simply want to make a change or fix up peeling surfaces. They all find their way to C&E — artists who “get very specific about what they want” and others who “can be very vague. It gets complicated because people typically come in with chips, sometimes from elsewhere, which is fine. I tell them I can give them that color, but once it’s on the wall, it will not match the chip exactly. But if they have the patience to try it out at home, on the wall, and then come back, we can remix it. I expect the difference to happen — that’s the nature of color, and they don’t need to apologize; I actually like fooling around with color,” Early enthused.

Early said she hopes that C&E will stay around for some time. “It’s important to pay attention to what people are looking for, to get it in and figure out what may have to go to give the new products the space.” In terms of trends, in paints (all of which, with the exception of a few specialty primers, are from Benjamin Moore), almost everything C&E stocks is zero VOC (volatile organic compounds) and low odor. As for hardware, “There’s not that much new in hardware,” Early said.