A daytime coffee shop may be welcome, an evening wine bar, perhaps not so much: Neighbors packed a Philipstown Planning Board public hearing Thursday night (July 30) to object to plans by the Garrison Café to enlarge its space and operations and become a restaurant and more.

Given the outpouring of mostly negative feedback and inquiries about further possibilities for public input, the Planning Board, meeting at the Butterfield Library in Cold Spring, voted to keep the hearing open, into September. 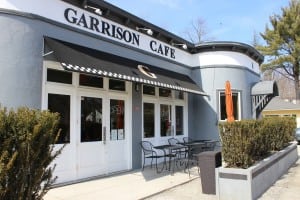 Located in Garrison on Route 9D at Grassi Lane, the café is near St. Philip’s Episcopal Church, the U.S. Post Office, the Garrison Union Free School and a regulated wetland. The overall site consists of two adjacent parcels, one in the highway/mixed-use district and the other in the hamlet/residential district, and the café building contains a vacant, three-bedroom apartment.

Garrison Café proprietors Lydia and Matt McMahon, who own the café business — titled Vista44 LLC — but not the overall property, want to convert the apartment into a restaurant-cum-wine bar and open a wine/spirits shop as well. Their plans involve a change of use, plus alterations to a structure containing 1,000 or more square feet, and thus, under the town code, need Planning Board approval.

At present, the café serves eggs in various forms and other breakfast options, sandwiches, burgers, pizza, salads, pastries, coffee, wine, beer and other selections. The McMahons anticipate operating the restaurant/wine bar from Wednesday through Sunday from 5 p.m. until either 10 p.m. (Wednesday and Sunday) or 11 p.m. (Thursday, Friday and Saturday). 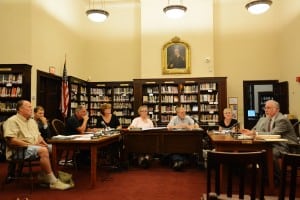 The building was once part of a gasoline station. In a more recent pre-café incarnation, it housed the Garrison Market, which for a time featured Graze, a restaurant open two nights weekly.

At the public hearing, both Planning Board and audience members questioned aspects of parking, traffic flow and safety, in a Garrison Café expansion.

Representing the McMahons, Glennon Watson, of Badey & Watson Surveying and Engineering P.C., said the design had already been revised from the version shown the Planning Board in June, to better address parking demands. “We made sure the parking works,” he informed the Planning Board and public. 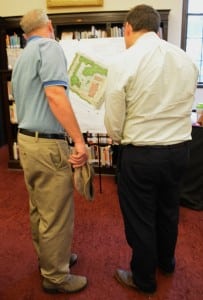 Attendees review the Garrison Cafe plans before the public hearing.

Matt McMahon commented that the plans may make the restaurant “seem so large, but really it isn’t” and that the reconfiguration would create a pleasant dining venue. “This is just an attempt to have an evening business a few nights a week,” he explained, suggesting that the restaurant could become the gathering place for Garrison. Route 9D from the post office to the school “is really the commercial heart of Garrison,” he said. McMahon also reminded everyone that the café already has the right to serve alcohol and stay open evenings.

Ron Gainer, the town’s consulting engineer, pointed to the need for review of wetlands-related matters and noted that, in general, “there’s a variety of site-plan issues that have to be resolved.”

A threat to ‘pin-drop quiet’?

Nearby homeowners presented the board with a letter expressing fears that expanding the business “will have a negative impact on our neighborhood” — Grassi Lane, Alfalfa Lane and Route 9D — a place “peaceful and pin-drop quiet after dusk.”

Citing “quality of life” issues, the letter stated that “the site would morph from a small deli operation to a larger establishment serving food and alcohol late into the evenings” and that the restaurant may host larger events with music (inside and outside), as well. Restaurant operations would also bring noise, along with vehicle headlights and other forms of intrusive lighting, the letter predicted.

“No one who has moved here would expect to be subjected to that kind of activity,” the letter said. It added that “residents’ right to peace and privacy has recently been infringed upon in the mornings by changes to the post office” and that “the neighborhood was not consulted about these changes.”

Safety could be affected, too, the letter warned. “There is already increased traffic to and from the post office, with cars darting in and out of the parking lot and using Grassi Lane, making it more difficult to enter and exit,” the letter stated. “With a wine bar there, the situation could grow more hazardous for a longer period each day, with the added potential for driver impairment.” 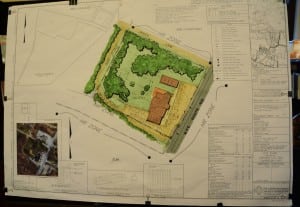 Plans for the Garrison Cafe enlargement into a restaurant/wine bar

Moreover, the residents observed in the letter and in their remarks to the Planning Board, both Grassi and Alfalfa Lanes are private — not commercial — roads, maintained by residents at notable cost. “People from the post office already use Grassi Lane without residents’ permission and we would have every reason to expect that patrons at the expanded wine bar, particularly during special events or performances, would as well,” the letter said.

Addressing the Planning Board, Wally Schaefer, a neighbor and café customer, said that he understands the McMahons’ desire to fulfill a dream of opening a wine bar/restaurant. “I wish them best success but I hope we can find a middle ground … something that suits everybody. It really is a residential zone,” already disrupted by the post office, he said. “Are we going to have five or six hours of peace and quiet? I think you should really give that a lot of thought.”

Goldee Greene, who lives on Alfalfa Lane, expressed the “wish that there was a more heightened sense of sensitivity, a little sensitivity, about what Garrison is all about. We don’t really need a place where we’re all going to be hanging out.” She described the project as “unsafe … unaesthetic” with possible “shocking” and “horrifying” repercussions. While she favors the café’s continued existence, she said, she does not want a restaurant. “No, that’s not what we need in the hamlet of Garrison.”

Diane Travis described a problem “with people parking on private roads” even now and criticized the Planning Board for conducting a site survey June 28 without alerting residents. “None of us was aware” of the board’s presence, she said. “You didn’t see our side. We were like blindsided. You didn’t do us justice.”

The Planning Board routinely visits sites involved in applications; it schedules its trips in public during monthly meetings.