Parties say the show will go on

The Beacon Theatre, located on the east end of Beacon’s Main Street, may have new owners, but the lights in the restored historic facade won’t be dimming any time soon. In fact, if Brendan McAlpine of McAlpine Construction and Patrick Manning, the managing director of 4th Wall Productions, have anything to say about it, their lights will keep shining for many years to come.

“This makes sense in the long run,” said Manning, of 4th Wall’s recent sale of the building to McAlpine in July for an undisclosed sum. “The McAlpines’ reputation is unquestionable; in terms of their love of Beacon, their ability to do quality projects, and their tendency to think outside the box. For 4th Wall, the stress of being an artistic company, and also being the landlord of an 80-year-old building, for a volunteer company was quite heavy. We all have other jobs.” 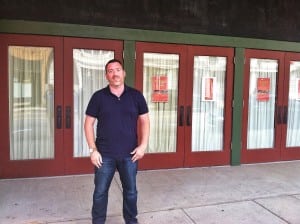 Brendan McAlpine in front of the Beacon Theatre (Photo by B. Cronin)

The Beacon Theatre was first built in 1934, a time when Main Street in Beacon was thriving and theater held a very different place in society than it does now. Back then there was no Netflix, no Xbox, no iPhone that the person sitting next to you in the audience can’t seem to go for more than five minutes without checking.

The 800-seat theater was packed with performances and movies almost every night. But as the age of grand old theaters began to draw to a close in the 1970s, its doors were shuttered. The building sat vacant on Main Street, further deteriorating, causing countless Beaconites to wonder what could be done to restore it.

4th Wall Productions decided to take the plunge back in 2010. They bought the building from developer William Ehrlich with grand plans of renovating it, via an unconventional deal in which Ehrlich retained the note to the building and 4th Wall paid the mortgage to him. And as they worked out a plan to first restore the lobby of the building in order to begin doing small-scale performances, they found an ally in the McAlpine family, who were in the process of restoring the factories on East Main into the complex currently known as the Roundhouse, which is considered to have been the catalyst for the transformation of Beacon’s east end.

“We had actually looked at the theater back in 2007 and thought, ‘Man, this is a cool building, it would be great if something happened here,’” said McAlpine. “So when we found out that 4th Wall was buying the building, we went down there and said, ‘If you need help, we’re here to lend our expertise.’ Because having a theater in the middle of town is a great draw. And if you remember back in 2010, Main Street didn’t look anything like it looks now, particularly on this end of Main Street.”

For the next few years, McAlpine Construction donated time, materials and work in order to help restore the theater’s facade and lobby, and build out two commercial spaces on either side of the lobby. 4th Wall built an audience in Beacon. That allowed to them to clear the first financial hurdle they faced: the issue of taxes.

“There were some taxes that we agreed to from the previous owners, but then the tax-exempt status of 4th Wall was not filed in a timely fashion to the City of Beacon,” explained Manning. “And that laid out tens of thousands of dollars in more taxes to the city. We wound up saddled with over $75,000 in taxes. But you know what? We sucked it up and we paid the taxes. It was a climb. But it was because of the support we have from our patrons that allowed us to pay those taxes on time, and it made the city whole. We may be tax exempt, but I think we’ve been one of the biggest taxpayers the City of Beacon has had for the past couple of years.”

With the taxes to the city paid off, 4th Wall began planning an ambitious campaign to raise $2 million in order to restore the theater’s main space. But during the planning they began to have second thoughts. 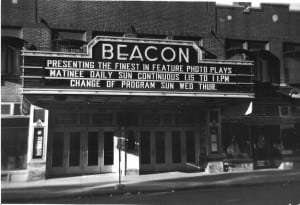 The Beacon in its heyday (Courtesy of Beacon Historical Society)

“We are one of the few theater companies around here that runs in the black,” said Manning proudly. “We’ve never been in the red. But we started questioning the sustainability of the space. We started to really look at this and ask ourselves, ‘What is going to make sense in the year 2034, as opposed to 1934 when this theater was built?’” And what the company decided wouldn’t make sense was attempting to renovate a space designed to cater to audiences of the 1930s.

“Theater used to be a meeting place,” said Manning. “It was a place where you could pack a thousand people in there. That made sense back then. But does that make sense for us today, with the current economy and how difficult it would be for us to raise $2 million for interior renovations? Because if we won the lottery tomorrow and put $2 million into the renovation of that space, which could easily be spent, we’d immediately be behind the eight ball.

“Now we’d have to run the facility at a certain temperature all the time or it would get musty or it would deteriorate. We’ve seen this a few times. The Paramount in Peekskill changed hands not because they didn’t have a great location and a beautiful space, but because they couldn’t sustain the heat and electric bills. We’re bursting at the seams right now in terms of audience because our 100 seats aren’t enough. But we don’t need 800 seats.

“This is sustainable now. But it would have become unsustainable if we had continued on the path we were going, both financially and artistically. We don’t want to be stuck having to do My Fair Lady every other year in order to pay the bills. So we said that in order to keep doing good quality theater, we have to always be able to pay our bills.”

Manning thinks that the decision 4th Wall has made — to abandon plans to renovate historic theaters and instead focus on building small, flexible multiuse spaces — is where theater companies will all be headed in the future. With that in mind, 4th Wall approached McAlpine in the spring with the idea of selling the space to him, maintaining the two commercial spaces and transforming the rest of the space into a multiuse performance space with a residential aspect.

McAlpine admitted the process ahead will be an uphill climb, but he’s ready for it.

“When we looked at what we wanted to do with the Roundhouse, the first 15 people we told our plans to said we were out of our minds,” he said. “I can tell you that the first 10 banks we told about our plans also said we were out of our minds. But what makes this project interesting is the theater component. A typical developer would walk in, make their money, and get out.

“But Beacon is home. I’ve been sitting at a desk on Main Street for eight years now. I talk to everyone and I see everything that’s going on. So we wanted to figure out how to not only make this work economically, but also culturally so that all of Beacon benefits. The residential part of it will allow us to have a theater in the building. We could have just put 75 apartments in there, and Beacon really needs that housing, but this is better.”

Specifics are still being drawn up, but McAlpine hopes to move ahead as quickly as possible, even if he’s not quite sure how it’s all going to work out yet.

“Pat [Manning] doesn’t even know yet about the latest concept I have to show him, which I hope makes his eyeballs pop out of his skull,” said McAlpine.

“Yes, in a positive way!” said McAlpine, and the two men erupted into laughter.

4 thoughts on “The Beacon Theatre Sold”