Democratic candidate talks with The Paper

On Tuesday (Sept. 1), The Paper spoke with Carl Frisenda, the Democratic Party candidate seeking office as Philipstown Highway superintendent. The questions, and Frisenda’s answers — edited slightly for conciseness — appear below. 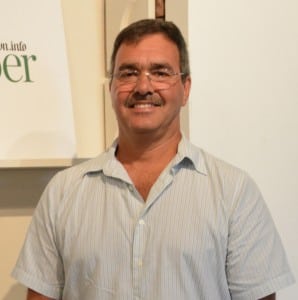 What qualifies you to be highway superintendent?

I worked for the Putnam County Highway Department for 34 years, all aspects — started out as a laborer, driver, machine operator. I was a construction crew chief. I went back to equipment operator because I liked running the equipment, at that time. I’ve done all aspects of highway work, from in the trenches to pipe jobs, blacktop, snowplowing. As a matter of fact, over the years the county would loan me out to the town to help take care of the roads. I think it’s time I started doing something a little bit different; I retired in June [from the county].

What do you see as Philipstown’s priorities for roads and highway infrastructure?

There’s pipes that need to be replaced — culverts, pipes, basins. [Also] to try and get the dirt roads a little bit harder than they are now, so you have less dust and potholes. Snow is always a big issue. I’d like to see a little bit more maybe to purchase some little Bobcats with snowblowers, just to help move snow when it’s really thick and deep. They work quite well and there’s a lot of spots on these back roads that need the snow moved.

[Beyond that] I’m hoping I can get in there and make a little bit of a change, try and keep up on the trucks. If they need to be replaced try and get some kind of system in there for purchasing new trucks: so many years and you get a new truck and take the old truck and do something else with it or auction it off. Try and save on maintenance; if you have newer stuff, less maintenance. And if you don’t have to keep on grading the roads, getting all the dust into the machines, into the filters, you’re not replacing the filters all the time and hopefully it will be less money going out.

The question of dirt road paving has sparked heated debate. What should be the determining factor in making those decisions?

This is like a tough subject here. There are spots that absolutely need [paving]. But there’s a lot of dirt roads that could stay dirt roads, if we have them to where we don’t have the dust, don’t have the potholes and stuff. Just [pave] steep, steep roads, because they always seem to wash out first. On level ground, they can pretty much stay the course; you can grade them and keep them like that.

There’s probably a few sections that would need to be paved. There are some sections of road like [on] South Mountain Pass that are very steep. It was the right decision [to pave a section there]. I know there’s a lot of people down there that didn’t think that. In the long run, it will help out. I used to live on a dirt road, East Mountain Road North. For the longest time, I thought it was good. Then they paved it and it was a lot nicer. You don’t have the dust. You don’t have the potholes. With all the dust, you’re always thinking about what kind of maintenance you are going to have on your own vehicle, on the town’s equipment. Just going up and down the road — that’s a lot of wear and tear.

[In considering paving], you have to look back in past years to see what kind of maintenance you have put into the roads and how much money you’ve put into the dirt roads, especially the steep hills. You could figure out that certain sections would need to be paved. I’m not saying everything, because I like the dirt roads, too. It kind of brings back the country into the country.

The Philipstown Highway Department handles many major road projects in-house, using its own machinery and personnel. Is this the most economical way? Or does it create hidden costs in purchases of expensive equipment and employee salaries?

There’s a certain extent where you say “do it in-house” and “sub it out.” There’s not many guys up there and to have them all working on a single project takes away from all the other issues you have out there. I think “subbing” some stuff out is the way to go, just in keeping [it so] the guys there at Highway can go out and do their grading, do their brush [control], do their repairs on the basins and blacktop roads that need to be patched.

New York wants local government streamlining and consolidation, with penalties for municipalities that do not make progress. Should Philipstown, Cold Spring and Nelsonville combine their highway functions to help meet this mandate?

That’s a hard question. I see down here with the village [of Cold Spring] they have a lot of stuff going on with a small group of guys that do everything. To get everybody in the same house I think wouldn’t be a good idea, because everybody has their own stuff they have to do, and if you have everybody in the same house then you’re trying to do everything. It just makes it easier if you have your own village, town, county, state [departments. Otherwise], you might be taking everybody from the village and bringing them someplace else and then nothing is getting done here. They have enough stuff going on in the town that they don’t need to be worrying about other things.

Should the highway superintendent run as a Republican or Democrat and be elected every four years? Or should he or she be hired by the town?

It has its advantages, to be appointed — the Town Board can pick who they feel would be the best for the position. With elections, people go out and elect who they feel is [best]. I’d say leave it the way it is because I would rather vote for somebody … . That’s the way it’s always been done and it should stay like that.

For a change. He [Roger Chirico] has been there a long time. Roger’s a good guy. But it is time for a change. I’ve been talking to people and they say I should do well. So I’m here to do it. And I hope to win. But whatever happens, happens.