A party and bonfire held by members of the Cold Spring Boat Club at its riverside location on Sept. 12 so angered neighbors that a number of them have asked the village government to cancel the lease with the club.

A dozen neighbors, calling themselves the Cold Spring Waterfront Coalition, shared with The Paper an email they sent to Mayor Dave Merandy and Village Clerk Mary Saari in which they complained that the party had included a late-night bonfire with six-foot-high flames that was positioned perilously close to the boathouse.

The neighbors also complained the club had violated its lease with the village by allowing alcohol and loud music on the property. (The village leased the site for a token fee of $1 per year, although the agreement has been suspended and will be renegotiated pending the removal of coal tar from the site.) 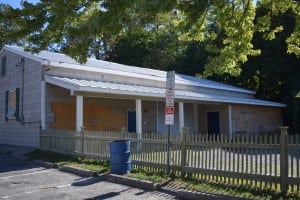 The Boat Club building has been boarded up and will be razed.

The email, which was discussed at the Tuesday (Sept. 22) meeting of the Village Board, claimed that Cold Spring Police arrived at about 11 p.m. in response to complaints but that after the officers departed the party continued until 2 a.m. with Boat Club members “‘scooping the loop’ [around the block at the foot of Main Street] … running stop signs and belligerently honking their horns.”

Claims of many ‘asinine’ incidents

“These are just a few of the many, many asinine, dangerous and untenable occurrences over many years,” the neighbors complained. Boat Club members “seemingly live in the past and meanspiritedly long for the days when our neighborhood was a lumber yard.”

The coalition was also critical of the village’s handling of the lease agreement. “For eight months of the year [from September to April], the village turns a blind eye to the unsightly and irresponsible nature of the Boat Club facility,” it alleged. As a result, it said, “a large, prime portion of village-owned waterfront land is transformed into an industrial outdoor storage yard for large boats, rusted pipes, used tires, rusty rims, a growing number of wooden docks and two cranes.

“While most members of the Boat Club are required to store their boats off site during the winter months, more than a small few are allowed … to use the village property as their personal storage facility,” the email continued. “Storage rights never were within the generous spirit and dictates of their $1-a-year lease.”

The residents asked the Village Board to evict the club, writing that “the current scenario exists because it is the ‘easiest’ and ‘cheapest’ way for the Boat Club to give the least and take the most.” They urged the board “to eliminate all current and future legal exposure to the village and have the Boat Club remove all docks, cranes, etc. now and cancel the Boat Club lease.” 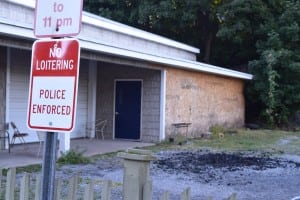 Ashes from the Sept. 12 bonfire

Merandy said at the Tuesday meeting that he and Trustee Fran Murphy had visited the site and, judging by the pile of ashes, there had been “a very large bonfire … quite close to the building.” The mayor said the building’s exterior showed evidence of the heat. “It could have definitely went up,” he said, calling the bonfire “reckless.”

“Enforcement is the key,” Merandy said. “Residents, I think understandably, were not very happy with the [police] response.” He pledged to follow up with CSPD Officer-in-Charge George Kane.

Deputy Mayor Marie Early commented that “many things were done in violation of the [Village] Code,” adding, “We need the police to enforce it.” She also alluded to the possibility that members of the Cold Spring Fire Company were present, a factor she suggested may have affected police response. ”Has there been a conversation with the police?” she asked. If there is a call about a fire, she said, “just because some of the people standing around watching the fire happen to be members of the fire company” does not make it safe.

John Landolfi, president of the Cold Spring Fire Company, had not responded to requests by email and phone for comment by press time on Thursday afternoon.

Trustee Fran Murphy argued that because the lease with the Boat Club has been suspended, those who attended the party were trespassing. “We don’t want people hanging out there,” she said, “The Boat Club needs to know that there is no Boat Club as of now.”

The lease has been set aside while the New York State Department of Environmental Conservation removes coal tar from the site, a project that is expected to be completed by the spring and which will require the razing of the boathouse.

Cold Spring Boat Club Commodore Mark Patinella declined to comment on the email, saying he had not seen it until The Paper shared it with him, and that he had not attended the Village Board meeting. (The email was classified by the board as “correspondence” and so not listed on the agenda.) Patinella said the club’s board of governors will discuss the matter but that a meeting date had not been set.

Merandy said at the Village Board meeting that he didn’t understand the Boat Club’s thinking. “They seem to be vulnerable but don’t understand that,” he said. The party involved only a few people, “so I’m not going to condemn the whole club,” but these incidents could lead to the termination of the lease. He promised the board would take action “if there is continued abuse of the property.” He also said that the club’s neighbors deserve to be treated with respect.

During public comments, Jean Pierre Seibel, who was among those who signed the email to Merandy and Saari, said he appreciated the mayor’s use of the words respect and vulnerable in light of the fact that the village government and Boat Club will be renegotiating the lease. While “some members are wonderful,” he said, “the Boat Club barely acknowledges there’s a community down there.” 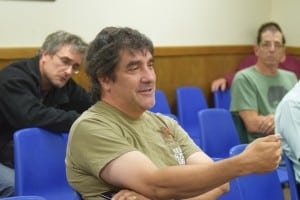 Jean Pierre Seibel at the Sept. 18 board meeting

Another neighbor who signed the letter, Sean Tortora, said of the party: “If anyone wanted to say, ‘We definitely don’t want to have this club any more’ … ripping apart the Boat Club and starting a fire within feet of a structure says to me, ‘We don’t want to come back here.’”

Greg Phillips, a resident of New Street, attended the Village Board meeting the week after the bonfire and spoke briefly about the incident and the issue of village liability. In a follow-up email to The Paper, he wrote: “I am not one to advocate revocation of lease and existence, as seems to be the tone of the letter. Do I think there needs to be a better job of controlling activities and practices of what happens there? Yes.”

He added: “It is typically the actions of a few that spoil it for the many, and I think the Boat Club would be the first to admit that. Cooperation and mutual respect is what will yield the best result, for this and many issues.”