Teamwork is what it’s all about at Guiding Eyes For the Blind (GEFTB). Partnerships not just between a visually-impaired person and a service dog, but also partnerships of carefully selected breeding pairs, between volunteer puppy raisers and home socializers and from scientists to kennel volunteers who form one large team with one goal in mind. That goal described by Cold Spring’s Seamus Carroll, a GEFTB board member, is “to breed guide dogs and train dog and human teams to work together. Historically this was for the visually impaired.”

More recently, along with their longstanding visually-impaired services, GEFTB has introduced programs pairing dogs trained in different ways, to work with those on the autism spectrum. 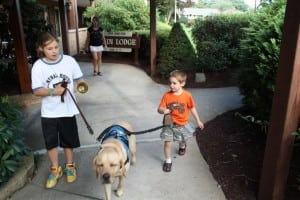 Nicky Mitrione (right), with his Guiding Eyes dog, Kelso.  They have been together for two years now.  (Photo courtesy of Guiding Eyes For the Blind)

Founded in 1954, GEFTB is one of the three largest breeding and training facilities in the U.S., with clients from across the country. It consists of two sites, the original training facility in Yorktown Heights, and a breeding and birthing center, the Canine Development Center, which, completely renovated and enhanced, re-opened this past September in Patterson, New York.

GEFTB is involved in the complete life cycle of their service dogs, which are mostly Labradors, along with a smaller group of German Shepherds. It begins with genetic planning, trying to bring out dogs with the best traits for the job they will be doing, meeting a rigorous standard. These traits can be physical — working to eliminate hip dysplasia, certain cancers and other conditions which can affect the breed, or related to temperament, using selective breeding to work on bringing out needed qualities.

“We do genetic selection exceptionally well at Guiding Eyes,” Carroll says. “We don’t see dysplasia any more in our breeding stock and we can breed specific types of dogs for specific students: larger, smaller, faster moving, slower.”

All potential dogs are screened thoroughly with all steps applying to puppies born at the facility and for dogs born elsewhere who are identified through a potential candidate database. About a third of the dogs evaluated become GEFTB breeders. Using a combination of canine genetics, breeding technology and behavioral development, GEFTB has been able to maximize the qualities required for a working dog and to minimize health problems. 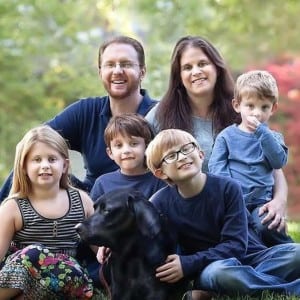 The Weiner family, including Lucs (third from left, front row) with his service dog, Raphael.  (Photo courtesy of Guiding Eyes For the Blind.)

Currently, about half of the 450 puppies bred each year become working guide dogs and GEFTB graduates about 150 to 160 teams a year. “The percentage that makes it through keeps going up as our genetic process gets better,” Carol said. … “We export genetic materials around the world and also take in from other places, exchanging genetic material.” Carroll added that their new facility, with its enlarged genetics lab, provides a major upgrade to the breeding capabilities.

Pups deemed potential service dog candidates begin their training by placement in homes with carefully trained volunteers, whose job is to introduce a variety of socialization elements into the pups’ daily lives, anything from stair climbing to leash walking, crate sitting and experiencing the clatter of pots and pans. Families usually are given two pups for four to seven days at a time. The pups then rotate through several families. Families, as part of their commitment to GEFTB, are expected to host puppies five or six times a year. This is how Carroll and his family became involved.

In 2009, under pressure from his daughters to get a dog, but concerned about the amount of travel he and his wife had to do, they discovered this program and got involved. By now he figures they have hosted and helped train more than 60 dogs, some of which they have been able to see go through the whole training process and “graduate” with their human partner, something Carroll says “made the girls very proud.”

Volunteers wishing to work with puppies for a more extended time period can train to become “puppy raisers.” They receive a pup at around eight weeks of age and keep it until the dog is 16 months old.

Volunteers come from all types of living situations and can range from seniors to families with children. There are pre-placement classes to attend, then group classes taken with the dog, and quarterly assessments. Puppy raisers and their dogs can often be spotted in Cold Spring, which Carroll says is a prime location for training because of a walkable Main Street with pedestrians and a stoplight to encounter. Towards the end of its time with a puppy raiser, the dog is tested, and, if it passes, it then goes into formal training to become a guide dog; that training takes about six months, at the training center. 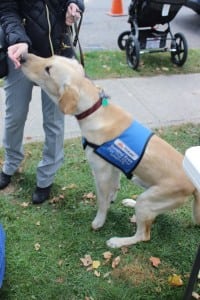 Very Important Canine ”Wrangler”, a/k/a the TODAY Show dog, gets a treat at the Strut Your Pup event.  (Photo by A. Rooney)

It is at that point that the visually-impaired student comes in and is paired with a particular service dog. They undergo three to four weeks of training together. Once they are deemed ready to go, a staff member goes home with the new pair, and spends several days living with them, getting things up and running.

Those dogs which don’t become guide dogs go on to purposeful lives. Many assist in police work, doing drug sniffing and bomb detection work; a small number go out as pets — for which there is a very long waiting list. The normal working life for a guide dog is six or seven years.

As Carroll explains it, working with those with “autism is a new application for the dogs. The most important trait for these dogs is patience. With the many different levels on the autism spectrum, the dogs can provide unique things to each. Some autistic kids tend to bolt. A harness can attach the child to the dog, in a way that is fun for the child. Once attached, the dog is an 80-pound anchor, and once the child bonds with the dog the tendency to bolt is dramatically reduced. It’s also common for autistic children not to sleep well. The dog winds up sleeping with the child, and the child sleeps calmly, wakes up rested and as a result family life is more pleasant and the entire family is impacted in a positive way. Before, families were often afraid to go out in public and now the child is much more malleable and comfortable going around. The families that get these dogs say the dogs have transformed their lives.”

As with their visually impaired program, GEFTB covers all costs, which include, specifically for this program, an extensive in-the-home training program, which is available to those living within two hours of their facility.

Right now, as the program is new, there are about 12 “autism-trained” dogs per year, a number which Carroll says they hope increases to 18 shortly.

Mary Jo Jacobs, mother of Andrew, who was diagnosed with autism at age five, described her family’s experience with the program and their dog Iota: 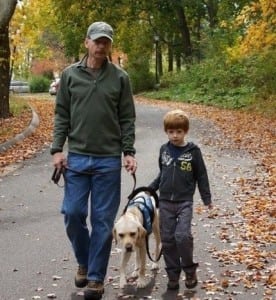 Gabriel Fountain (right) and his service dog, Jem, who has been with him for two years.  (Photo courtesy of Guiding Eyes For the Blind)

“We were fortunate to become a Heeling Autism family when Andrew was nine. Iota slept with him, and you could see how much Andrew relaxed. Andrew communicates his emotion through the dog. I’ll tell him, ‘I love you.’ He’ll answer ‘I love my dog.’ It’s beautiful. He walks the dog, feeds him, he’s his friend. Andrew is quite verbal now and is in mainstream classes. I know dogs will be part of his life the rest of his life. He has made friends along the way, doing his dog walks, giving him a rich social life outside the home. He told me, ‘My dog does a lot of good things for me just by being there. He makes me happy.’

GEFTB offers a host of volunteer opportunities, both at each of their facilities and in private homes, and they are always in need. If interested, it is probably best to read through their comprehensive website, guidingeyes.org, first, and determine what might be possible for you.

All dogs which become part of a team are taken care of, financially, by GEFTB for life in terms of veterinary care and all training; there is no charge to their human partners.

2 thoughts on “Dogs and Humans Working Together”