The removal of coal tar from the soil beneath the Cold Spring Boat Club is underway. Watermark, the company contracted by the New York State Department of Environmental Conservation (DEC) to excavate and remove the toxic byproduct of a manufactured gas plant that operated on the site in the late 19th century, began demolition of the clubhouse on Nov. 2. By the next morning, the building was gone.

Watermark will excavate much of the site to a depth of 10 to 12 feet in order to remove pockets of the black-brown, viscous substance, which is known to be carcinogenic. Most of the digging will take place where the building stood and in the parking lot to the east. Testing will determine what needs to be removed from the lot west of where the building stood. 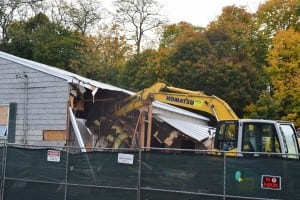 Work crews began demolition of the Cold Spring Boat Club building on Nov. 2, the first step in a process to clean up coal tar on the property. (Photo by M. Turton)

Cold Spring Mayor Dave Merandy said residents living west of the Metro-North tracks have been contacted and invited to be added to an email list the village will use to keep them informed. DEC representatives also have also gone door to door to discuss the project. Merandy said he plans to meet with Watermark and DEC within the week and that a public meeting to review the project will be held soon after that.

The excavation will be tented to contain airborne pollutants and reduce dust and noise. Trucks will have to cross the Metro-North Railroad bridge to remove the excavated material for disposal. Concerns were raised about the structural integrity of the bridge at a number of public meetings and, as a precaution, only tri-axle trucks will be permitted. 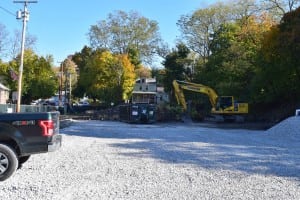 The Cold Spring Boat Club building disappeared overnight after being demolished on Nov. 2 as the first step in a process to clean up coal tar on the property. (Photo by M. Turton)

A spokesman for the DEC indicated that work at the site is expected to be “substantially complete” by April 1.

The Cold Spring Boat Club, established in 1955, leases the site from the Village of Cold Spring, which owns the property. The club vacated the premises at the end of August. The lease, which has nine years remaining, has been set aside for the duration of the cleanup.

There are more than 200 coal tar sites across New York; the estimated cost to clean them up runs into the billions of dollars. Despite being a known carcinogen, coal tar is used to seal driveways, treat skin disease and as an ingredient in shampoo.