Pointing the way to great reading

If there were any doubts in Kate Ryan’s mind that Beaconites were desperate for a book store, they were quelled two weeks ago.

Ryan, along with partners Annmarie Nye and Corey Eastwood, opened Binnacle Books last weekend in Beacon. But it was only a few days before opening, when the trio took down the tarp covering the front window, that word began to spread as to what was in the storefront previously occupied by a hair salon at 321 Main St.

“People were banging the door down,” Ryan recalls. “Or they’d just come right in. We’d all be standing here with tarps on the floor and half-built bookshelves, explaining that we’re clearly not open yet. And people would say, ‘Well, hurry up!’” 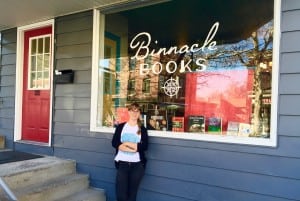 Kate Ryan (Photo by B. Cronin)

Even now, an hour before opening on a sleepy Monday morning, a steady stream of would-be customers could be found interrupting Ryan’s conversation to knock on the front window or even let themselves in.

“People are so excited and supportive,” said Ryan, after asking one particularly enthusiastic shopper to come back in an hour when the store was open. “The community is already giving us a lot of love. A lot of people have been coming in and telling us that this town needed a bookstore. It feels really good to have that kind of symbiosis.”

Binnacle Books — the name comes from the box on a ship that houses the compass — isn’t the trio’s first experience selling books. All three met in New York City and have worked in various bookstores. Eastwood, who hails from the Hudson Valley, continues to own other bookstores in New York City and Madrid. But, in a story familiar to many recent transplants to the area, the three friends felt the city was simultaneously becoming unaffordable and losing its vibrancy. 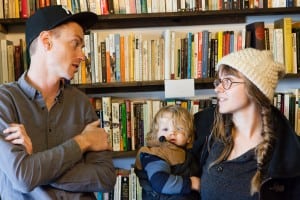 “I’m a born-and-bred New Yorker, but we were feeling increasingly alienated and pushed out by gentrification,” said Ryan. “We were looking for a space to spend time in that was less intense, and had more of a feeling of community and possibility. We like the mix of things that Beacon has. It’s very urban, but it feels small. The main street feels like a community, but it’s not a homogenous community. It doesn’t feel isolated from the areas around it. There’s interesting stuff going on here.”

Binnacle aims to be part of that “interesting stuff.” All of the store’s shelves were custom built to be pushed out of the way to accommodate readings, performances, and film screenings that will be projected on the storefront window. Through these events, Ryan and her partners are hoping that Binnacle can become an important part of the thriving cultural scene that drew them to Beacon in the first place, instead of a harbinger of the kind of gentrification that pushed them out of New York City.

“We’re trying to listen to what all members of the community are interested in,” she said. “We’ve already gotten an enthusiastic response about our foreign-language section, so we’re planning some foreign-language readings. We’re always thinking about what’s happened down in the city, where changes have happened. When those changes work, what’s making them work? I think it works when people know what they want in their community and make that happen.”

The immediate response to Binnacle Books has certainly shown that Beacon wants a bookstore in their community. Even in the age of e-readers and Amazon Prime, Binnacle’s enthusiastic reception proves that independent bookstores still have a vital role to play.

“We’re at a moment where people can do anything they want without leaving their house,” said Ryan. “But what we’re realizing now is: We don’t want that. We want physical experiences, we want social experiences. And part of what I love about bookstores is that they’re such an important ‘third place,’” a term coined by urban sociologist Ray Oldenberg to describe public places where people gather outside of home or work, such as parks, cafes, houses of worship and bookstores. “Now that people are free to choose the terms of their social engagement, people are actively choosing that third place,” she said. “That’s exciting.” 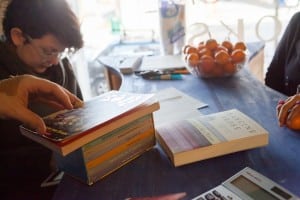 For now, Binnacle’s stock consists of about 80 percent used books and 20 percent new books, so shoppers can simultaneously refresh their Marilynne Robinson collections while picking up the new Lucky Peach cookbook or the latest in Elena Ferrante’s series of Neapolitan novels. The store is also looking to purchase used books, with an emphasis on the store’s core categories of literary fiction, literary non-fiction, art books, science and nature, drama, cooking, and cultural studies. They’re also filling out their black-studies section, queer-studies section and what Ryan describes as “an awesome kid’s section.” While the store will accept some genre fiction, Ryan says they’ll continue to be somewhat selective since the store’s stock is carefully curated.

Indeed, a curious shopper scanning the impressive collection spread out on those wooden, movable shelves might wonder where all these used books came from in the first place.

“Secrets of the trade,” Ryan says with a smile. After all, every bookstore needs a place for mysteries.