During its decades-long isolation due to the U.S. embargo on trade and travel, Cuba had to feed its citizens without access to the machinery, pesticides, herbicides and fertilizers that came to define conventional agriculture in the U.S. and other developed countries. The nation also didn’t have the resources to transport food long distances and so relied on local farming.

As a result, Cuban farmers developed “agroecology,” an approach to growing food that was sustainable, small-scale and resilient. Campesino a Campesino, a movement that began in Central America, created networks for farmers to share their experiences and teach each other.

Dave Llewellyn, the director of farmer training at Glynwood, spent a week in Cuba as part of an exchange program organized by the Massachusetts-based Schumacher Center for New Economics to learn more about the concepts behind agroecology. “We’re doing our best with a changing climate and we have big lessons to learn from Cuba,” said Llewellyn, who was one of 250 delegates from around the globe who participated in the exchange. “They came up with a great means for putting their heads together to get everyone involved to work toward food security and transform their society.” 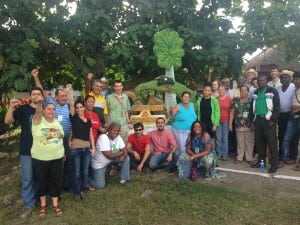 A group of delegates that visited Villa Clara, a central province. Llewellyn is third from the right.

Llewellyn and other visitors spent most of their time meeting farmers in a central province and hearing about and witnessing their methods. They learned how the farmers use biological controls, agroforestry and involve the community.

Sustainable agriculture uses resources wisely and effectively. Water is collected and conserved; soil health is essential and managed organically. Llewellyn described one farm that he visited as a closed-loop system: “They collected chicken manure on rice hulls to feed tilapia, which were then harvested and turned into fish meal to feed the hogs,” he said. “The hog manure was taken to a biodigester for the production of methane.” Nothing is wasted and everything has a purpose. Whatever is taken from the soil is replaced and regenerated. 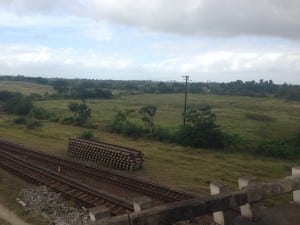 Llewellyn called this a ”typical landscape” and noted that it is very undeveloped, which he found refreshing. (Photo by Dave Llewellyn)

Back in the Hudson Highlands, Llewellyn sees ways farming can improve and become more sustainable based on what he learned in Cuba. Supporting local businesses and tightening networks would mean sourcing local food for consumers and local resources for the farmers. He wants to see local farms feed the surrounding communities, which could stop relying on food shipped from around the country. “We need to understand business and close the loop,” he said. He urged home gardeners to keep things out of the waste stream and compost.

At Glynwood, he hopes to someday host Cuban farmers and will be sharing his experiences as much as possible. One other thing he wanted to bring home? One of the 1957 Chevys that became iconic images of Cuba during the embargo, and that he says he saw everywhere.

3 thoughts on “What Can We Learn from Cuba About Farming?”