Municipal meters and Haldane among complaints

It’s more the exception than the rule when parking is not discussed at meetings of the Cold Spring Village Board. That tradition continued at the board’s March 8 meeting with residents raising parking concerns on two different fronts — the proposed installation of a pay station at the municipal lot on Fair Street and ongoing congestion near Haldane School in the area of Cedar Street and Locust Ridge.

Several residents of the Spring Brook Condominiums attended the public hearing at the start of Tuesday’s meeting on a proposed ordinance that will add metered parking to the Fair Street municipal lot. Built in the 1970s, Spring Brook includes more than 60 condominiums, with only one parking space for each. Until now residents have used the municipal lot as a free, overflow parking area. At one time parking for 10 to 12 cars was allowed along Fair Street near the condominiums but is now prohibited.

“This [metered parking] is going to hurt us badly,” Gloria McVey, vice president of the Spring Brook Condominium Association, told the board. “At least give us back the [Fair] street parking spaces.” McVey cited a number of ongoing problems, including conflicts with patrons from the Riverview Restaurant who use the Spring Brook parking lot; a situation she said has nearly resulted in fisticuffs on occasion. 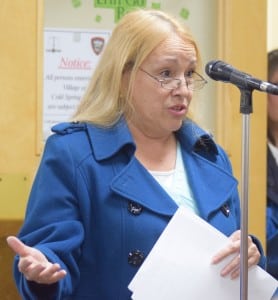 Village resident Michael Armstrong, who helped draft a 2008 study of village parking as background for the comprehensive plan, commented that a limited number of passes could be issued to Spring Brook residents — but at a cost of $95 per month. He urged the board to find a balance between the village’s need for revenue and the condominium residents’ call for improved parking. The public hearing will remain open for another week. 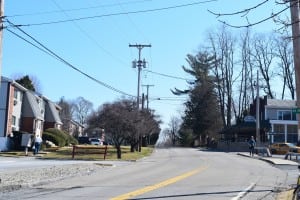 Parking is now prohibited on Fair Street next to the Springbrook condos.
(Photo by M. Turton)

Trustees also heard about parking problems near Haldane in the Cedar Street – Locust Ridge area. The village was copied on a letter from three residents on Locust Ridge to Diana Bowers, superintendent at Haldane, that listed several ongoing issues. The letter states that students from Haldane routinely park in front of driveways and garages in the area, preventing residents from entering or exiting their property and creating a situation they describe as dangerous.

Speeding both by cars and buses, littering, drug paraphernalia and heavy traffic are also listed as frequent problems. The letter questions why Haldane has not budgeted to provide adequate parking for students and visitors. Mayor Dave Merandy said he will speak with Officer-in-Charge George Kane regarding increased enforcement in the area.

Merandy explained that the work stoppage in the removal of toxic coal tar deposits from beneath the Cold Spring Boat Club has been caused by the contractor encountering more subsurface rock than anticipated. The rock will in all likelihood increase the cost of excavation. Merandy said that digging on site is expected to complete by May 1 and that there is “absolutely no way” the project will not be completed prior to summer.