A traditional diner reinvents itself

When Saman Munaweera opened his restaurant, Red Pepper Diner, in October 2014, he presumed his potential customers would want “American” food rather than the cuisine of his native Sri Lanka. After searching high (the farther reaches of upstate New York) and low (Staten Island), and looking at around 50 properties, one situated at 1458 Route 9D between Route 52 and Dutchess Stadium, enticed him. He bought the business, which was formerly Salinas Tequilas, and renovated.

He filled the menu with traditional items, from griddle breakfasts to burgers and paninis. Munaweera, a gregarious host who would often chat with customers about his homeland and its cuisine, was surprised to learn they had an interest in what they hadn’t before tasted. Some asked if he would prepare some of his native dishes, and soon Munaweera was offering them to every customer, even though they remained “off menu.” Next he experimented with a buffet with both Sri Lankan and traditional American foods, and the response was immediate: people loved the Sri Lankan dishes.

“People found the dishes to be very flavorful, and also very lean and healthy, cooked with very little fat, and not many processed ingredients,” he says. “Most people don’t know about Sri Lanka or the cuisine. So we worked on a menu, consisting of the traditional favorites — foods you always want when you go back home — and also things people can identify easily.” The menu also has photos of the dishes. 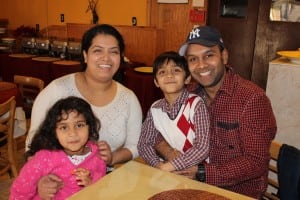 Saman Munaweera, his wife Thanuja and their children (photo by A. Rooney)

Now every customer is handed two menus: one for Red Pepper Diner, with its traditional offerings, and the other for Red Pepper RaSa (rasa means “taste” in Sinhalese), with the Sri Lankan dishes.

“Every Sri Lankan meal has rice and at least two proteins and an assortment of vegetables: greens, carrots, beets and a savory melon,” Munaweera explains. “Everything is cooked on the day, and I make everything by hand, including the vegetable stock, using fresh ingredients. In summer we grow vegetables in the small yard out the back. Also, we’re not spice-heavy. In Sri Lanka you toast the spices first to release the fragrances, then build the dishes from the ground up, around those.”

As Munaweera describes it, Sri Lanka, although small in area, has distinct geographic and climatic regions, as well as numerous ethnicities and religious groups (the vast majority of its people are Buddhist, but there are also Hindus, Christians and Muslims), and the cuisine reflects this. His home city, Kandy, is in hill country and has a mild climate, while the food of the south is far spicier. Sri Lanka’s colonization and trading history influenced its varied cuisine as well. As part of the British empire from 1815 until gaining its independence in 1948, Sri Lanka was ruled and settled by the Portuguese and later the Dutch and was long described as “the spice island,” a focal point in trade routes worldwide. 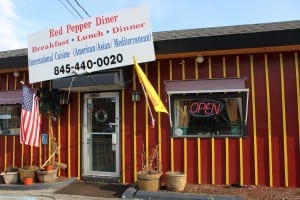 The Red Pepper Diner (photo by A. Rooney)

The Sri Lankan menu offers appetizers like brinjal moju, pickled eggplant; shredded curry beets; lentil dhal cooked with coconut milk and regional spices; and a coconut, chili, lime and spices sambal garnish, each of which are $3. As for main courses, most of which are $12 to $15, kothu roti provides an introduction to a dish popular at street markets all over Sri Lanka. It consists of shredded roti flatbread stir-fried with vegetables, onions, eggs and sometimes a protein, finished with a curry sauce. The clanging of the cleavers chopping the roti is a familiar sound throughout the country, Munaweera says.

In addition there are beef, chicken and goat curries and biryanis with saffron, cashew nuts, raisins and herbs, along with pol roti — pan-grilled flatbreads made with fresh coconut, onion and green chilies. Also featured are hoppers — crispy bowl-shaped pancakes made with rice flour, eaten for breakfast, lunch or dinner in Sri Lanka. There are different varieties, sweet and savory, some with an egg cooked in the middle. String hoppers are string mats of vermicelli, eaten with curry, chutney and sambols.

To finish the meal off there is watalappan, a custard dessert made from coconut milk, palm sugar, cashews, cinnamon, cloves, cardamom and nutmeg. The restaurant also serves Sri Lankan beers, Lion Imperial Lager and Lion Stout, as well as Ceylon (Sri Lanka’s former name) teas. The Friday night buffet provides two curries and rice and noodles, three or four vegetables and two desserts for $14. A full bar is open in an adjoining room. 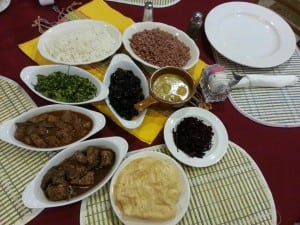 As the only Sri Lankan restaurant around this area, the expatriate community, including many doctors and dentists living near Newburgh, quickly discovered Red Pepper RaSa. It’s far easier than making the trek to Staten Island, which has many Sri Lankan restaurants. That’s good news for Munaweera, who first moved about eight years ago to New York City (which he calls “beautiful, I loved it when I saw it, seeing the world in the same spot, everyone from different cultures living together”) with his family, which includes his wife, Thanuja, a beautician, whom he met in Dubai, and two children, ages 5 and 7.

“We’re happy here,” he says. “This is a better future for my kids.” His plans include adding more décor reflective of Sri Lanka to the restaurant, including photographs; opening a summer patio and possibly expanding the buffet to Saturday night and/or a Sunday brunch.

Red Pepper is open daily for breakfast, lunch and dinner; the Friday buffet is served from 6 to 10 p.m. For more information, visit its Facebook page or call 845-440-0020.

2 thoughts on “Sri Lankan Cuisine on the Menu”