Sudden, violent rainstorms and warmer winters. Hot summers parched by extended stretches of drought. In many ways, the effects of a changing climate are right outside our doors.

As the climate slowly changes, however, other, more far-reaching impacts may slip under the public’s radar. In New York, wildlife species that people know and care about are being forced to change, and move, as well.

In the Adirondacks, the Wildlife Conservation Society has reported that iconic songbird populations are declining as wetland habitat shrinks and becomes increasingly fragmented. The numbers of rusty blackbirds, gray jays, yellow-bellied flycatchers, olive-sided flycatchers and black-backed woodpeckers have all decreased by 15 percent or more since 2007.

The brook trout — the state fish of New York — thrives in clean, cool waters like those historically found in the Catskills, but increased temperatures and prolonged drought can lead to oxygen-poor conditions that suffocate trout embryos. Case studies predict trout populations in the Empire State will decrease by more than a third as fish move northward to cooler waters. 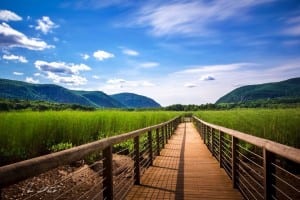 In the lower Hudson River Valley, The Nature Conservancy anticipates “strong shifts” in habitat for more than two dozen rare species in the 10-county region. Suitable habitat for animals ranging from turtles and frogs to the New England cottontail is also expected to shrink as warming trends push them further north.

For the organizations that create parks and preserves to protect open space, climate change has added a significant new dimension to conservation. While the groups cannot predict exactly how species and habitats will respond as the environment changes, land trusts in the Hudson Valley are increasingly identifying for protection “climate-resilient” places that will provide the most options for the greatest number of species over the long term.

“As we evaluate the habitat value of potential conservation projects, we look for areas that are connected to other protected land in a way that could facilitate migration,” explains Matt Decker, the conservation stewardship manager for the Hudson Highlands Land Trust. “Does the area have a variety of landscape features? Is it large enough to retain its value as conserved land as conditions change? Thinking about climate change has absolutely changed conservation on the local level.” 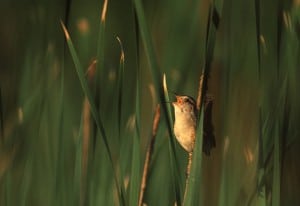 A wren at Constitution Marsh (photo by Eric Lind)

In the Hudson Valley, the impacts of climate change on plants and wildlife are many. While the three-month period between December and February of this year was about 3.6 degrees warmer than normal, the winter season — which saw almost no snowfall — actually exposed plants and some wildlife to lower temperatures than expected. Those temperatures can affect animals that have typically used the snow to keep warm over the winter, explains Sacha Spector, the director of conservation science at Scenic Hudson land trust.

“Without an insulating blanket of snow, the temperatures in the soil can actually be lower than what they’re used to,” he said.

Another effect, called “de-coupling,” occurs when other animals, responding to warmer temperatures, emerge from hibernation to find the seed-dispersing or pollinating plants they depend on haven’t yet bloomed — or vice versa, Spector says. Over the long term, wildlife numbers could decline if key resources are consistently unavailable.

Rising slowly as ice caps melt thousands of miles away, the Hudson River is approximately 13 inches higher than it was a century ago, and it’s risen three times as fast over the last 15 years as it did in the entire 20th century. That, too, can affect its delicate ecological balance.

At Constitution Marsh, the 270-acre wildlife sanctuary that’s been managed by Audubon since 1970, the marsh wren has thrived in a habitat comprised of what director Eric Lind calls “soft-bodied plants” — the grasses, sedges and rushes that make up the marsh, rather than the more woody vegetation in the swampy areas closer to the land. But as the sea level and, consequently, the Hudson, rises, the marshes could be lost, literally drowned out by the rising water.

“Some birds will be okay, because they’re adaptive,” Lind says. “But there are other species that may not fare so well based on the area-specific benefits they really need.” 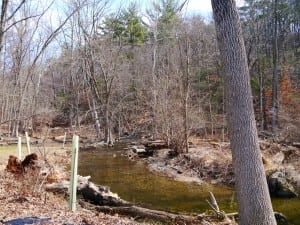 The stream that runs near Lind’s office (photo by J. Simms)

Birds seen regularly at the marsh today were rarities 40 years ago, Lind says, citing the black vulture and Carolina wren as examples. While those birds have moved into New York, Audubon predicts that the common loon will lose more than half of its summer breeding range in the next 60 years. Because New York is at the southern end of that range, the loon may someday become almost exclusively Canadian.

From the billions of microbes that release crop-enriching nutrients into the soil to the carbon dioxide that plants remove from the atmosphere, the various features and impacts of the natural world are intimately connected.

During Hurricane Irene (more frequent “superstorms” are also thought to be another effect of climate change), a grove of Hemlock trees at Constitution Marsh, already weakened by invasive insects, was knocked down. The trees had provided valuable shade to a stream that runs by Lind’s office and into the Hudson. Over time, as the sunlight slowly heats the now-exposed stream, it could become uninhabitable for temperature-sensitive fish and insects.

Meanwhile, the open patches of Hemlock forest are even more susceptible to invasive species.

There are around 835,000 acres of protected land in the Hudson Valley, according to Spector, and to secure wildlife habitat for the long run, perhaps twice that much will need to be preserved. The key, land trusts believe, is to protect the “resilient” landscapes — diverse places connected to already-protected land, which will give wildlife the ability to roam as their present homes change. 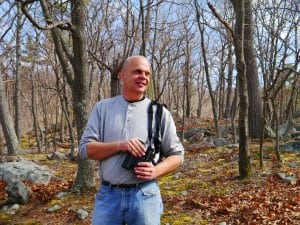 Scenic Hudson plans to release a map later this year that will identify conservation priorities up and down the Hudson in hopes of creating a blueprint for an ecologically balanced region.

And it is a region well worth protecting, environmentalists say. From the New York Harbor to Troy — the brackish section of the river where salt- and freshwaters mix — the Hudson bisects an incredibly diverse cross-section of eco-regions from Atlantic coastlands to the Appalachian peaks and into the Allegheny Mountains.

“The geology of this region is extraordinarily complex,” says Erik Kiviat, executive director of the Hudsonia environmental research institute. “It provides that variety of microclimates that we think allows organisms to move around in response to habitat and climate change. We hope it will help more species survive the changing environment.”

2 thoughts on “Pushing North for Survival”