Public hearing scheduled for May 19

The Philipstown Planning Board is again considering a proposal for the redevelopment of the former Guinan’s Pub and Country Store on Garrison Landing.

The plan, submitted by Badey and Watson Surveying and Engineering on behalf of Garrison Station Plaza, Inc., which owns the 6.6-acre property, was received by the planning board on April 21 and mirrors an application it approved in 2012. The new proposal calls for a restaurant and wine bar on the main level with two apartments upstairs. A new wastewater treatment system would also be installed.

The planning board will hold a public hearing on the proposal on Thursday, May 19, at 7:30 p.m. at Butterfield Library in Cold Spring. 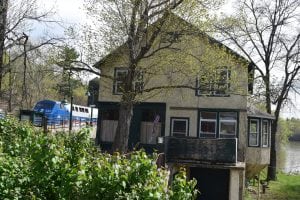 Guinan’s Pub on Garrison Landing has been closed since 2008. (Photo by M. Turton)

Guinan’s Pub and Country Store operated for 50 years. A popular gathering place, it was seen by many as an informal community center. In the morning, commuters picked up their newspaper and coffee there while during the day the deli and store offered sandwiches, snacks and household necessities.

After work and on weekends locals often enjoyed a beer in the tiny pub overlooking the Hudson River. “Irish Nights,” held on the first Thursday after each full moon, were a fixture for decades and attracted musicians and visitors from beyond the local area. The evening inevitably included a stirring rendition of Danny Boy sung by owner Jim Guinan.

In 2005, Garrison resident Gwendolyn Bounds chronicled the history of Guinan’s Pub in her book Little Chapel on the River. The closing of Garrison’s favorite watering hole in 2008 brought national media coverage.

Developers in the past have proposed converting the building to offices or an upscale restaurant and inn.

One thought on “New Proposal for Former Guinan’s Pub”