State of emergency declared, then lifted

The city of Newburgh’s water supply is drawing attention from state regulators after City Manager Michael Ciaravino declared a state of emergency on May 2 due to the presence of perfluorooctane sulfonate (PFOS), a man-made pollutant that was a key ingredient of the fabric protector Scotchgard and is still used in pesticides, cleaning products, and hydraulic fluids for aircraft.

Less than 24 hours later, the state of emergency was lifted after the city turned off the water supply from Lake Washington, where the PFOS was detected, and turned on the city’s backup pump station at nearby Brown’s Pond, as well as a tap into the Catskill aqueduct system.

“The water that’s now coming out of your faucet is perfectly safe to drink,” said Mayor Judy Kennedy at a press conference on Tuesday. “It has no PFOS in it as of now.” She added that the city’s measurements put the amount of PFOS at 140 parts per trillion, which is below the safety threshold of 200 parts per trillion (ppt) set by the federal Environmental Protection Agency.

However, the city remains under Stage III water conservation measures, which bans using water for non-agricultural irrigation purposes, or ornamental purposes such as fountains or non-public swimming pools. Food service establishments in Newburgh also may not serve water or ice unless it is requested. 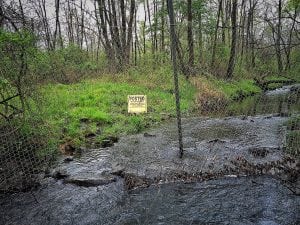 Silver Stream flowing under the fence from Stewart International Airport on its way to Lake Washington in Newburgh.  (Photo by B. Cronin)

Ciaravino said in a statement that although the PFOS in water samples analyzed by the New York State Department of Conservation are below recommended levels, the NYSDEC and Department of Health are recommending that Newburgh officials take steps to reduce or eliminate the compound. Further, he noted, the EPA is soon expected to reduce the maximum level of PFOS allowed in drinking water to levels below those found in the Newburgh water. Last summer the New Jersey Drinking Water Quality Institute, a department of that state’s Department of Environmental Protection, recommended a threshold of 13 ppt, or 187 ppt lower than EPA guidelines and 127 ppt lower than the levels in Newburgh.

In a joint statement, U.S. Senators Charles E. Schumer and Kirsten Gillibrand and Rep. Sean Patrick Maloney, whose district includes Newburgh, called on the EPA to immediately provide testing and planning assistance to the city of Newburgh and to release its new guidelines. “The EPA must publish its new PFOA standard — yesterday,” said Schumer. “They promised to do it by spring, and here we are in May. Clear guidance from the federal government is needed to map out the best plan of action.”

PFOS was detected in Newburgh’s water supply in 2014 as part of an EPA program to collect data on contaminants suspected of being present in drinking water but without health-based standards under the Safe Drinking Water Act.

PFOS has drawn increased scrutiny from environmental officials since it was first classified by the EPA as an “emerging contaminant” that could post health risks. PFOS was invented by 3M in 1949; the firm phased the chemical out of production in 2002 amid growing concerns about its toxicity. Studies on animals showed PFOS to cause cancer, stunted growth, endocrine disruption, neonatal mortalities and other ills. Once in the environment, the chemical does not biodegrade. It can only be removed through such technologies such as activated carbon filters or reverse osmosis units.

PFOS was detected three times in Lake Washington in 2014, with the levels ranging between 140 and 150 ppt, similar to the levels announced this past week. While the exact source of the contamination remains uncertain, Mayor Kennedy said the contamination was getting into the lake via Silver Stream, a tributary that begins on the grounds of the Stewart International Airport.

“The lake itself is not the source of the problem,” she said. She also said that one possible solution to the problem would be to divert Silver Stream so that it no longer flows into the lake. “As we discover where the contamination is coming from, then that entity, wherever or whatever it is, will be partly responsible and part of the cleanup process,” she said.

One thought on “Newburgh Water Under Scrutiny”