The Putnam County Legislature last week approved a 15-year lease of property at the former Butterfield Hospital site in Cold Spring for a senior center for residents of Philipstown.

According to the agreement approved at the May 3 meeting, the county will lease 6,000 square feet of space in the Lahey Pavilion from Butterfield Realty, LLC, and developer Paul Guillaro. After the 15-year term, the county will have the option to extend the lease by 10 years.

Last year the legislature estimated the cost over 15 years at about $3.5 million. The legislature also agreed to accept a donation of $500,000 by Garrison residents Roger and Elizabeth Ailes, which will go toward renovating the space. Roger Ailes is CEO and chairman of Fox News, and Elizabeth Ailes is publisher of the Putnam County News & Recorder.

The Lahey Pavilion will house the senior center. Ailes’ name will be on the inside. (file photo)

According to the PCNR, “the agreement between the county and the Ailes’ family’s 501(c)3 nonprofit stipulates how the renovation and outfitting of the center will proceed.… Once completed, the like-new structure will be turned over to the county.”

By accepting the donation, the legislature agreed to name the facility “The Roger Ailes Senior Center.” A one-acre park will be named for former New York Gov. George Pataki, also a Garrison resident. In addition, the agreement calls for a road within the Butterfield campus to be named Betty’s Way after the late Betty Budney, a longtime town councilwoman and volunteer.

“I believe this sets a dangerous precedent on any future negotiations for donation of property or money between a private individual and the county,” LoBue said. “In effect, this private individual is holding the government hostage and making the control over the project a condition of the donation.” 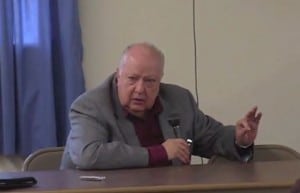 Roger Ailes at a meeting in 2013 speaking about the proposed senior center (file photo).

“If you walk into any hospital or any facility you will see that there are donations made for wings of hospitals or universities and the name is affixed to the wall of who that person is who donated the money,” she said. “This is just something that there really is no prompt to it other than to show our gratitude.”

LoBue countered that hospitals and universities are private organizations, and that the senior center will be a Putnam County facility.

“This family has been trying to donate half a million dollars to our seniors for years now, and it’s about time we say, ‘Thank you so much for what you’re doing for our community and for our seniors,’ ” she said.

The senior center is expected to be completed by the spring of 2017.

One thought on “New Senior Center Will Be Named for Ailes”