A group of residents have started a petition asking the Philipstown Town Board to pass a firearm safe storage law. The law already exists in Westchester County, New York City and towns throughout the state. This step is the least that we can do to make our kids and community safer. As we dug into the data in Putnam County, it became apparent that suicide by gun is a real issue. If guns are locked up when not in use, they’ll be less likely to be used during a suicide attempt and will also be inaccessible to our most precious assets, our kids. 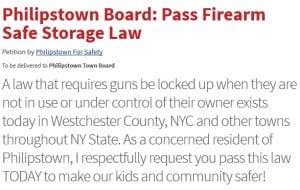 Our plan is to ask the board to pass this law at an upcoming meeting. We are hoping to drum up as much support for this law as possible via a petition at petitions.moveon.org. We already have more than 325 signatures. If the board hears from the majority of their constituents, it will be more compelled to act.