Phil Oliva, a senior aide to the Westchester County Executive, won the Republican congressional primary on June 28 and will face incumbent Democrat Rep. Sean Patrick Maloney on Nov.  6. According to the state Board of Elections, Oliva defeated Kenneth Del Vecchio of Warwick by 878 votes, 3,228 to 2,352.

Oliva had broad support among Republican leaders in the 18th Congressional District, which includes Philipstown and Beacon.

The district is considered one of 43 (out of 435) “purple” swing districts that have a balance of likely Republican and Democratic voters, so presumably both national parties will be interested in the race.

The Republicans control the U.S. House but Democrats are hoping to gain seats if Hillary Clinton does well against Donald Trump in the presidential race. 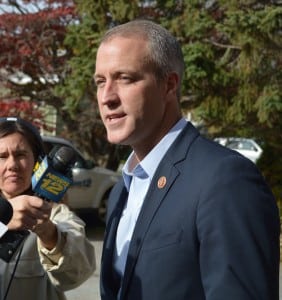 More people vote in presidential years. Maloney, who worked as an aide in the Clinton White House, benefitted from the higher Obama voter turnout in 2012 when he unseated one-term Republican incumbent Nan Hayworth.

As of the last reporting period, which ended June 8, Maloney, in his second two-year term, reported $1.7 million cash on hand compared to Oliva’s $77,000. If the national party and its big contributors begin to believe Oliva has a chance, the money may flow in.

Oliva favored the British withdrawal from the European Union and believes the Obama administration is not doing enough to combat terrorism, including the ISIS movement. Maloney lately has emphasized services for military veterans and was recently appointed to the Board of Overseers of the U.S. Military Academy at West Point, which is part of his district.

Gun rights will be certainly be a fault line in the race. Maloney participated in the Democratic member sit-in on the floor of the House in the aftermath of the mass shooting in Orlando. Oliva mocked this effort on social media, calling Maloney “an out-of-touch Washington politician” and committed himself to protecting Second Amendment rights. 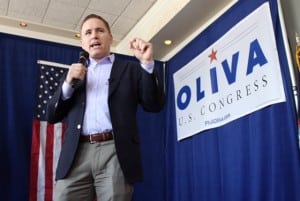 Maloney has championed train safety, working on legislation requiring new technologies be installed to prevent accidents. The Metro-North system and a major freight line run through the district. He gained national attention recently when as co-chair of the Congressional LGBT Equality Caucus he fought for an amendment to prevent employment discrimination for sexual orientation or gender identity on federal energy and water projects. After initial defeat, Maloney prevailed with votes from 43 Republicans.

The issue of the moment for Oliva is the activities of an opposition research videographer apparently hired by the state Democratic Party.  While recording opponents at their public campaign events has become standard fare, Oliva has claimed, in a blizzard of press releases, that Yougourthen Ayouni spied on his private residence, including looking in the windows at his wife in the kitchen. Maloney has urged the Democratic Party to release the raw footage to Oliva and said his campaign had not hired Ayouni.

On June 22, Oliva thanked Maloney for agreeing that he receive the tapes, but as of June 30 Oliva said he had not received any material and threatened legal action.

One thought on “Oliva to Face Maloney”