The much welcomed, occasionally complained about, Main Street sidewalk project is nearing completion with the contractor turning onto the final leg of Furnace Street. Trustee Marie Early, who can often be seen on Main Street conferring with supervisors and workers, told a meeting of her colleagues on July 12 that she expected construction would be finished within a month, and trees planted in the fall.

Other trees in the village need serious pruning. Jennifer Zwarich, chair of the Village’s volunteer Tree Committee, which hopes to oversee the new plantings on Main Street, received a sympathetic hearing from the trustees about contractor bids that came in well over the money allocated in the budget but stopped well short of resolving the issue. They promised to get back to Zwarich. 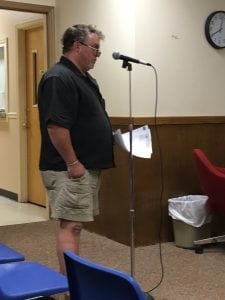 Water and Sewer Superintendent Greg Phillips addresses the Village Board on July 12. He is typically the only department head who attends the meetings in which reports are submitted. (Photo by K.E. Foley)

Although most department and committee reports were routine, they nevertheless shed a spotlight on some of the thorny questions requiring long-term strategic and financial consideration by the board.

Water and Sewer Superintendent Greg Phillips reported that the Cold Spring reservoir is at 95 percent of capacity, even after a significant dry spell in June. He also noted that water customers now can go online to check and pay their bills with a credit card or bank transfer. He also expects that wireless meter reading will be in place by year’s end.

Phillips said that the first phase of the rehabilitation of the upper dam is expected to cost $105,585. The contracted engineer has sent a draft proposal to the village attorney. Although the water system is funded by its users, rather than taxpayers, the trustees nevertheless have to weigh the impact of borrowing to pay for the infrastructure upgrade.

As is often the case, Phillips was the only department head in attendance and therefore the only one who could be questioned.

One project that served as an example of “stuff happens” was his report on the planned removal of an oil tank from the sewer treatment plant on Fair Street. “What began as a $900, simple project bloomed into one quite a bit larger,” he told the trustees. After removing the 1,000-gallon tank, workers discovered two 500-gallon tanks beneath it.

Phillips said he has followed state Department of Environmental Conversation protocol, which includes immediately notifying the agency. He estimated the removal project now has a $9,000 price tag.

As another example of coming up short in the municipal money department, the Historic District Review Board reported the State Historic Preservation Office awarded the Board a $14,200 grant to update the board’s design standards. The problem is the HDRB asked for $17,950, with $16,900 budgeted for a project consultant.

For the data hungry, the Highway Department reported it collected 54.71 tons of garbage in June as well as 17.43 tons of recyclable material. In addition, chief Ed Trimble wrote that the agency used 18 tons of blacktop on village streets.

Philipstown Town Board member Robert Flaherty told the trustees that the town recycling center on Lane Gate Road, open on Saturdays from 10 a.m. to 2 p.m., will once again take electronic waste, which had been suspended. He also noted that county-supplied Zika virus information kits were available at Town Hall.