Teens direct younger kids, then do show of their own

At the Philipstown Depot Theatre, when the “little kid summer show” actors age out, the most stage-struck among them graduate to performing in the teen summer show. Some also circle back around, directing, stage managing, choreographing and costuming the little kids’ shows.

This tradition began in the summer of 2008 when former little kids’ show participants Jessica and Rachel Ritacco and Amie Anderson, by then college students, directed a production of The Odyssey with actors in the fourth to sixth grades, while Tess Dul and Zosia Kruk, then in high school, led the second and third graders in Snow White. The following summer Dul wrangled orphans in Annie, and she continued in that vein in later summers. 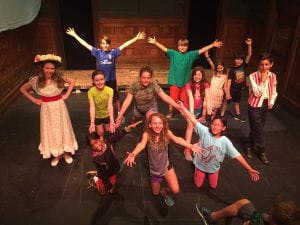 Enthusiasm is in full supply with the ”Mary Poppins” cast. (Photo by Amy Dul)

This summer, seven teenagers are steering Mary Poppins toward its July 21 opening. Harper Levy and Corydon Zouzias are directing, Jeremy Roffman choreographing, Jocelyn Lane and Cassie Traina costuming and Noga Cabo and Allie LaRocco stage managing. Each of them has come up through the Depot Youth Theatre program.

“I remember spending a lot of time with the counselors and really looking up to them,” Levy recalls. “I loved how it was a different feel than with other shows with adult directors. And now, even though there is an age difference, we can still connect with them, make them feel at ease.”

One of the trickiest parts of the summer productions are the auditions.  Having been through this themselves, the teens have come up with some strategies to minimize the disappointment of not getting a role. 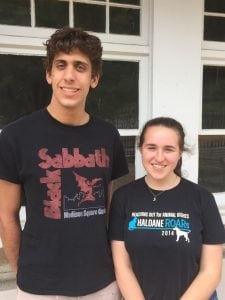 Directors in the morning, actors in the afternoon: Cory Zouzias and Harper Levy  (Photo by A. Rooney)

“With the auditions themselves, we try to make it as comfortable as possible, for instance there is no solo dancing required,” Levy says. “Jeremy teaches a short portion to them and watches how attentive they are. With the singing, we give them options: they can prepare a song from the show if they’d like, but they can also sing anything they’d like, with a friend or alone.

“With the sides [selected passages from the script], we tell them they are not necessarily up for the character they are reading and it doesn’t reflect how we see them in advance …. We also email the cast list instead of announcing it. From experience, we realize it’s hard to hear your part be read out in front of the whole cast. It can be difficult to handle, being visibly upset or even being excited but knowing someone else’s feelings are hurt at not getting that role. It’s better for parents to handle … 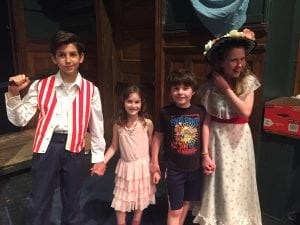 “We put a lot of work into everyone having fun with the process, so it’s not all about the big parts, plus we try to put people with less to do in the big ensembles. We always tell them that when they first read the script and can’t find many lines, it’s not indicative of what they may do in the show. We also have a lot for campers to do when they’re not in a scene — they’re not just sitting backstage. We do theater games, character analysis, make props and get them involved in the off-stage aspects of theater. We want them to see when you create everything, it’s much bigger than just performing on the stage. Sometimes we also just go down and play catch by the river, too.”

In terms of the discipline necessary to bring a show to life in three weeks, Zouzias says that he and Levy “stress at the first read-through how tight the schedule is and that there can’t be procrastination. That’s sort of the underlying theme: we can get behind and the more behind we get, the harder everything will be at the end.”

A “phone jail” has been established where campers drop their cell phones each day. Most days begin with warm-ups and stretches, and are followed by splitting the group into those doing scene work and those working on the music; choreography usually takes place in the afternoons. 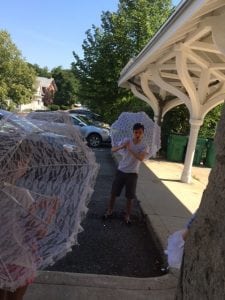 The teen creative staff is given an assist by members of the community who, together with Depot staff members such as technical director Donald Kimmel, lend their expertise.

The overlapping productions make everything more challenging. The same basic set must be used for both. Depot Managing Director Amy Dul says that the “first mission is to find a show that will support a group of kids and one that the directors are passionate about, and then it’s about meshing the sets so that both can be done.”

During the hour between their directing duties with the Youth Players and their acting ones with the Teen Players, Levy and Zouzias suit up for Damn Yankees, directed by Katie Bissinger. “It’s just plain happy — it’s great to return to a musical comedy after doing Sweeney Todd at Haldane,” Zouzias says. Levy adds: “It also teaches an important lesson: keeping those you love close, appreciating them. Plus it has fun dance numbers and hilarious characters.”

Mary Poppins will be performed from July 21 to 24 and Damn Yankees from July 28 to 31. Tickets are $12 at philipstowndepottheatre.org. The theater is located at Garrison’s Landing. A grant from the Putnam Arts Council supported both productions.

One thought on “Growing Up On Stage”