Beacon’s Center for Supportive Bureaucracy travels to Cleveland and Philadelphia

Ori Alon of Beacon didn’t know what to expect when he traveled to Cleveland for the Republican National Convention two weeks ago. With the threat of violent protests hanging over the city, and friends warning him to be careful, Alon wondered if he was, as he put it, “driving into the belly of the beast.”

But Alon couldn’t let fear stop him. He was traveling to Cleveland on an important mission: To hand out paperwork.

He went down to the public square near where the convention was taking place, where protesters of every political persuasion were gathered, and issued Open Carry Permits for Musical Instruments. On the bus, he spent an hour talking to a woman about the troubles in her life she had overcome, and issued her a Forgiver’s License and a Certificate of Recognition. He issued Diplomas for people on the street to be officially certified as Village Fools. He adopted a man he met on the street as his Uncle, via a Chosen Family Affidavit that declared he was adopting him “in recognition of all the ways in which you have enriched, supported, enlivened, and filled my life.” And to the Cleveland Police Department, as he has in the past to the Poughkeepsie and Beacon police departments, he issued a Joy Permit. 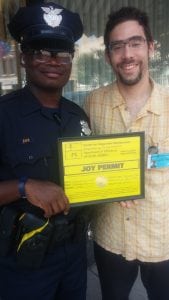 “Maybe it will make them happy,” said Alon. “Maybe it won’t. I don’t know. But it was a nice moment.”

Alon traveled to Cleveland in his capacity as the founder of the Center for Supportive Bureaucracy, a project that began ten years ago on the streets of West Jerusalem. Back then, Alon would sit at the outdoors market and help people write letters to themselves or to other people, then type them out on a typewriter. With their permission, he’d type out two copies of the letter so that he could keep one for himself as part of an eventual book. “They gave me something, but I also gave them something by listening to them,” he said. “I felt like a clerk, providing a service.”

One day two students who had just found a box of blank report cards in a recycling bin approached him in the market and asked him if he had ever had a bad year at school. As it turns out, Alon did have a particularly traumatic experience in first grade. His teacher caught him writing a certain four letter word and sent him to the principal’s office. He never made it to the office. On the way there, he ran into the bathroom, too terrified to bring himself in for punishment. When Alon recounted this story in the marketplace, the students took one of the blank report cards, wrote out a new first grade report card for him with straight As that praised him as one of the best students in the class, and gave it to him.

It was a joke, but it worked. The effect was transformative. 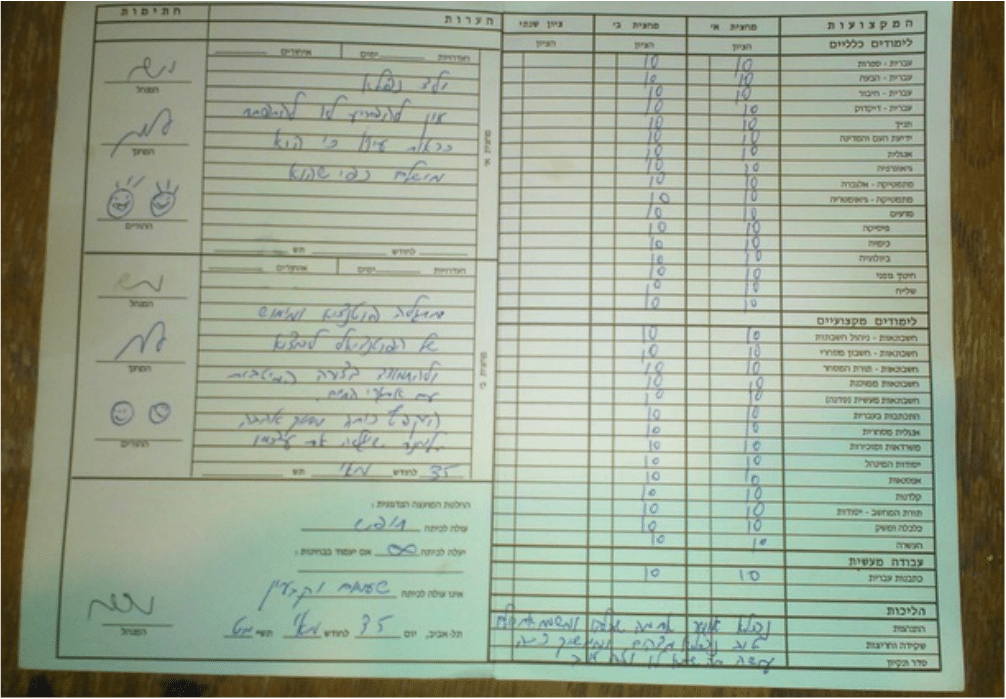 Alon continued the letter-writing project after moving to New York City, but it wasn’t until he moved to Beacon a few years ago, and began doing the project around town, that he figured out where he wanted to go with it. “Doing it here in Beacon was special because everyone here is so supportive of me,” he said. When he wrote a letter for one man who needed to tell his landlord that he wouldn’t be able to pay his rent that month, Alon thought back to the students with the report cards in Jerusalem and how he could turn his participatory art project into something that operates in a more official capacity, that could enact real change. The vast majority of the bureaucratic paperwork that we encounter is negative: Citations, summons, things with dire legal consequences. Why not use bureaucracy to positive ends? 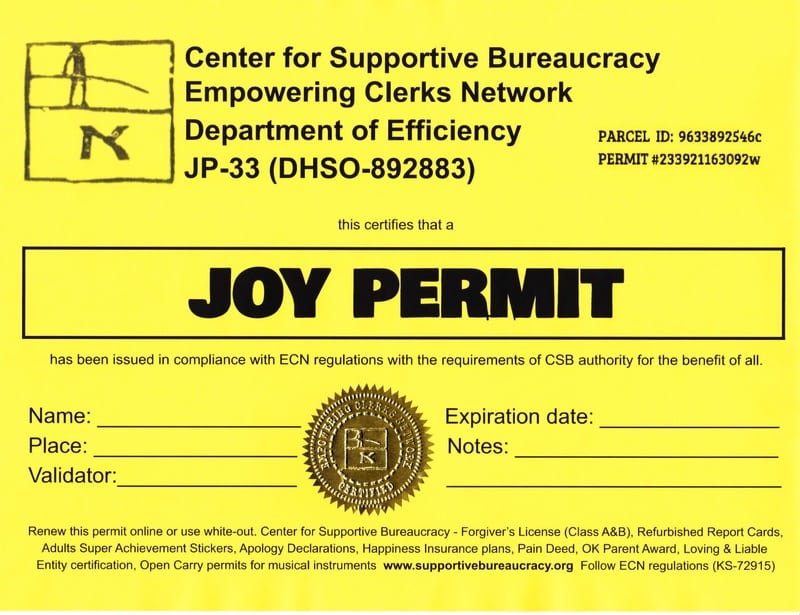 Alon and his volunteer clerks could soon be seen around Beacon at festivals issuing Clown Visas, Apology Declarations, Joy Permits and Happiness Insurance Cards to insure the Joy Permits. “You write on the insurance card who your happiness provider is, the people who bring you the most happiness,” he said. As Alon came up with more ideas for more forms, he began carrying around heavy, color coded binders wherever he went to keep track of it all. “One of the many ironies about this project is that I’m actually really bad with paperwork,” he admits. “I’ve had to become much more organized.”

Like the students who issued him a refurbished report card back in Jerusalem, the project is, essentially, a joke. “My job is to make people laugh,” said Alon. “But it’s also to make people think and to subvert authority. That’s the real job of a clown. And I’m also a therapeutic clown, offering services that are emotional and sympathetic.” If you’ve been issued a laminated Forgiver’s License, wouldn’t you be more inclined to forgive those around you? What harried parent, after a particularly bad day, wouldn’t want an officially dated and stamped OK Parent Award? 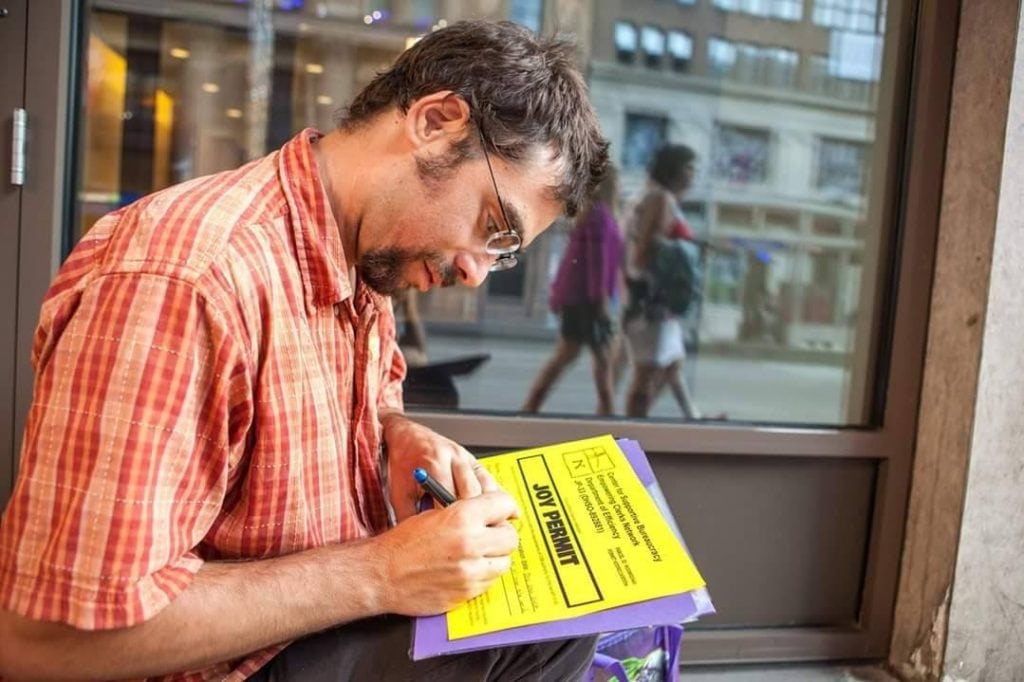 “One woman told me that the Joy Permit inspired her to look beyond the primary,” he said. “And to think about the continued role that citizens have to play in our democracy.” 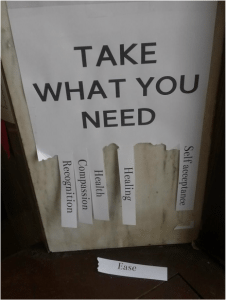 Those looking for their own Karma Inspections or Pain Deeds can usually find Alon or one of his CSB clerks at various Beacon festivals, or they can go online to supportivebureaucracy.org in order to become a CSB clerk and issue the documents themselves. “You can also go illegal and become an undocumented clerk,” he said. “We support that.”

Or, you may soon be able to go down to City Hall. As one more sign that the project is coming full circle, members of the Beacon City Council have spoken to Alon about the possibility of certifying the Beacon city clerks as CSB clerks so that they can “officially” issue his paperwork as well.

“It’s not like these are expensive forms to print, and if you’ve got to go down to City Hall anyway, why not make it fun?” he said. “Why shouldn’t a city be able to issue its own Joy Permits?”

One thought on “Bringing Joy to Politics, With Paperwork”