Complaints about lack of transparency, and calls for action

Putnam County lawmakers are moving forward with the creation of a Cold Spring Senior Center with a proposal to issue an $800,000 bond after the withdrawal of an offer by Roger and Elizabeth Ailes of Garrison to donate $500,000 for the project.

The county plans to lease 6,000 square feet in the Lahey Pavilion at the former Butterfield Hospital site on Route 9D from developer Paul Guillaro for a term of 15 years. According to a version of the lease that was approved by the Legislature in May, the county would pay $77,700 in rent the first year. The rent would increase annually by 2 percent or the consumer price index, whichever is higher.

In addition, the county would pay a “common-area maintenance” fee of about $50,000 annually, which is said to represent the county’s proportionate share (14 percent) of costs such as snow removal and landscaping. The fee does not include charges for water, sewer, electricity and other utilities, which will be paid for by the county.

The Ailes family withdrew its  pledge earlier this month after criticism over the terms of an agreement with the county that gave Roger Ailes control over the project, including hiring contractors. It also offered the county no guarantee on the work. Ailes, the former chairman and CEO of Fox News, resigned after allegations arose in a lawsuit and internal investigation of sexual harassment, which he has denied. The center was to have been named after him.

The bond proposal was approved on Aug. 23 by the Physical Services Committee, which consists of legislators Carl Albano (R-Carmel), Joseph Castellano (R-Southeast) and Barbara Scuccimarra (R-Philipstown). If approved by the Audit Committee — Castellano, Albano and William Gouldman (R-Putnam Valley) — it will go to the full legislature. The Audit Committee next meets at 6:30 p.m. on Monday, Aug. 29, at the County Office Building, 40 Gleneida Ave., Carmel.

Kevin Wright (R-Mahopac), who was at the Physical Services Committee meeting on Aug. 23, criticized his colleagues for sending the bond referendum forward without documentation. Further, he argued the Butterfield lease should not be signed by the legislature before the bond is approved.

“There’s a gap in the process,” he said. “I want to know how much something costs before I buy it.”

Another point of contention involved how much the county will be required to pay in property taxes as part of the lease.

While Legislature Chairwoman Ginny Nacerino (R-Patterson) and County Attorney Andrew Negro said the county will be responsible for about 52 percent of taxes associated with the Lahey Pavilion, which is 12,000 square feet, Dini LoBue (R-Mahopac Falls) maintained that is not the case.

The lease document approved in May reads: “Tenant agrees to pay as additional rent in each successive year of this lease to include percentage of real estate taxes. The additional rent which the tenant will be liable for at the commencement of the lease agreement shall be equal to 52.0833 percent of the total tax amount application to the tax year in which the lease commences, which shall be payable in equal monthly installments.” 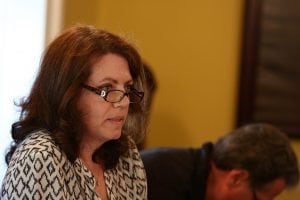 According to LoBue, the Butterfield property and its buildings are assessed at $1.2 million, with $66,000 in property taxes due each year. The lease states that the county is required to pay $30,000, which is about half of the taxes on the entire property, not just the Lahey Pavilion, she said.

Further, LoBue warned that once the property reaches its full potential, with new buildings added and others being renovated, the assessment will only increase, and with it, the taxes. After the initial 15-year term, the county will have the option to re-lease the site for another five years, she noted, or purchase the space at market rate. The lease does not say that the county will receive any credit for the $4.3 million it will have paid in rent or other charges toward the property.

A petition at change.org signed by 233 people as of Aug. 24 called on the Putnam County Legislature to make changes to the lease agreement between the county and Butterfield Realty, including:

The Physical Services Committee also unanimously approved an amendment to the lease for the legislature to consider that states the county will pay $61,000 to the developer to pay for a new heating, ventilation and air-conditioning system in the Lahey Pavilion.

Much of the public criticism of county lawmakers revolved around the fact that the proposed lease has not been made public (although it has been leaked to the press and posted online), as well as legislators seeming unsure about its status.

When Albano, who is chair of the Physical Services Committee, said the lease had been signed, Nacerino corrected him, saying it has been “approved” by the legislature, but not yet signed.

“Once the document is finalized, the public will see it,” said Albano.

This led residents in attendance to question how they can share their opinions on the project if they do not know what the county is agreeing to.

Lourdes Laifer of Cold Spring voiced support for a new senior center but at a lower cost to taxpayers. “This lease deal is good for the developer and lousy for the taxpayers,” she said. 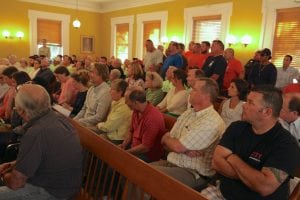 The audience at the Aug. 23 Physical Services committee meeting (Photo by Ross Corsair)

Cold Spring Mayor Dave Merandy asked the legislature why voters, and lawmakers at the town and village level, have not been able to see the lease.

“It’s not transparent,” he said. “We don’t know what’s going on. The bottom line is the people I represent are concerned about the cost of it. It’s upsetting and it’s not proper government.”

Steve Voloto, a Cold Spring Village trustee, presented letters from residents who are concerned about the county overspending on the project, and chided the legislators for not making the lease document available so residents could familiarize themselves with the proposal.

“There are concerns that people can’t just pick up the document and see for themselves,” he said. “And this is their money; this is our money.”

Philipstown Town Supervisor Richard Shea pointed out that development of the Butterfield property is going forward regardless of the county’s participation. He added that the town reviewed many other options for a senior center before pursuing space at the Butterfield site and determined that building a center from the ground up would be too costly.

“I’m hoping this thing can get resolved,” he said. “I do want to see the best possible lease negotiated.”

Donna Anderson of Cold Spring implored lawmakers to move forward. She said that 30 percent of Philipstown residents are over the age of 60 and need a place to go to receive nutritional, social and other services. “The current senior center is inadequate to serve the population,” she said. 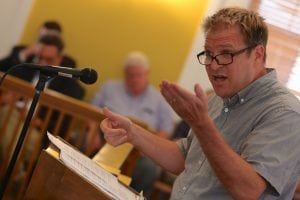 Shirley Norton of Cold Spring also urged the Legislature to make the proposed center a reality. “The first time I came here was about three years ago,” she said. “I’d like you to vote tonight, to make your decision .… I trust my legislators. If they voted for the lease, I trust they know what they’re doing.”

Patricia Sheehy, director of the county’s Office for Senior Resources, said that while the public is entitled to a level of transparency, residents need to leave certain decisions up to their elected officials and trust the right decisions are being made.

“We need to move this project forward,” she said. “It’s very easy to poke holes in things, and it’s much more difficult to move forward and do the right thing.”

Ed Cook of Mahopac said laborers are looking forward to seeing the project advance with public leases. “We are in strong favor of  building this,” he said. “But let’s plan it right.”

LoBue told labor union members assembled at the meeting that Butterfield is not the only project on the county’s radar. “Guys, we’ve got tons of projects,” she said. “This is a bad deal. It’s pro-developer. Unfortunately, the seniors have been used in this project, because it has nothing to do with seniors.”

Albano concluded the meeting by addressing some of the concerns brought up by residents. “There are no secrets here,” he said of the lease. “This is the way it’s been done with all legal documents.”

18 thoughts on “With Donation Nixed, County May Issue Bond for Senior Center”