GE asked to do more despite compliance with EPA decree

A number of public officials over the past few weeks have protested that a court-ordered, 13-year cleanup of the Hudson River by General Electric — declared complete under the terms of a 2005 agreement — has not removed nearly enough of the pollutants that the company dumped into the river decades ago that are still found in its water north of Albany and in fish spawning in the south, including near Beacon and Philipstown.

Polychlorinated biphrenyls (PCBs) are a complex grouping of chemical compounds that have been linked to cancer and other health problems and were banned in manufacturing in 1976, about the same time New York state ordered GE to stop dumping them into the river at its two plants north of Albany.

Over the next quarter-century, various government agencies and environmental groups have done battle in court with GE over its responsibility for the pollution. In 2002 the Environmental Protection Agency (EPA) designated the Hudson River as a Superfund site and ordered GE to dredge 2.65 million cubic yards of PCB-contaminated sediment from a 40-mile section of the upper Hudson. In 2005, GE agreed to undertake the monumental task. 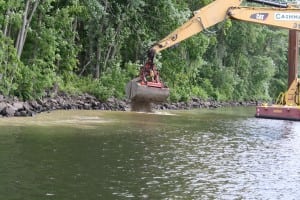 Dredging in the Hudson River (file photo by Scenic Hudson)

Ten years later, in the fall of 2015, GE completed the EPA-supervised dredging, two years ahead of schedule. The company says the cleanup cost $1 billion. In 2014, at a forum at Marist College, an EPA representative said it was unlikely his agency would require GE to do further dredging and that he doubted GE would volunteer to keep going. The EPA is conducting a review of the operation, with its conclusions expected in spring of 2017.

In a press conference on Aug. 24 at Upper Landing Park in Poughkeepsie, U.S. Rep. Sean Patrick Maloney called on the EPA to compel GE to continue dredging. He said there are still “too many of the PCBs in the fish, that means the people that depend on the river for food and for recreation and commerce are all hurt by the failure to finish the work.”

Many environmental groups have also said GE should continue the work, including Scenic Hudson, Riverkeeper, the Sierra Club, Clearwater and the Natural Resources Defense Council, and the state of New York appears not to be satisfied. In a letter to the EPA, Basil Seggos, commissioner of the Department of Environmental Conservation (DEC) wrote that, “with the significant amount of contamination left behind, it is likely the state can no longer concur that the remedy is effective.” 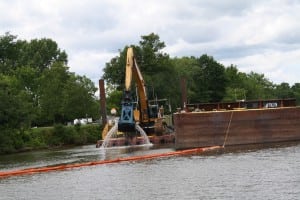 Dredging in the Hudson River (file photo by Scenic Hudson)

That seems to be a change of heart. In 2014, when environmental groups and municipal governments first began to protest that parts of the river not covered by the EPA/GE dredging agreement also had significant PCB pollution, the administration of Gov. Andrew Cuomo showed little enthusiasm for the campaign. At the time the governor was courting GE to relocate its corporate headquarters to Westchester from Connecticut, which was not successful.

Feeding the present call to pressure GE is a report released in March by the National Oceanic and Atmospheric Administration that concluded the concentration of PCBs remains higher than what the EPA had forecast they would be when the cleanup began. The report suggested it would be decades before fish taken from the river are safe to eat. 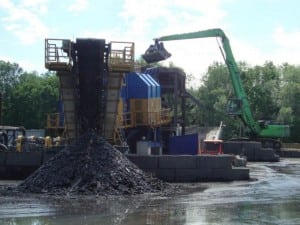 However, the agency conceded that its use of a predictive model not as data rich as that used by the EPA made the exact rate of decay of PCBs in the river “highly uncertain” — a point not acknowledged by the groups now calling for more work by GE but one that no doubt will be debated should the NOAA report lead to formal proceedings over GE’s liability.

Under the elaborate 2005 agreement, the NOAA, DEC and U.S. Fish and Wildlife Service serve as trustees of the cleanup plan. While the EPA will determine what, if anything, GE still needs to do, these three agencies will calculate the damage done to river communities, with the bill ultimately sent to GE. The trustee agencies will also oversee restoration projects.

In October, GE Chairman and CEO Jeff Immelt said in a statement that the company had fulfilled its obligations. “Our goal was to perform this work as safely and effectively as possible in full compliance with the rigorous standards and timetable set by EPA,” he said. “We brought world-class GE engineering and technology to the task, and we met every obligation on the Hudson, and will continue to do so. I am proud of the work of our GE team and confident that the dredging project will benefit the Hudson for generations to come.” He promised that GE would “restore underwater vegetation to areas of the river that have been dredged and will monitor environmental conditions in the river for the foreseeable future.”

GE has not responded to the more recent demands that its dredging work continue.