‘We have no velvet ropes up’

The Dutch Colonial homestead of Mount Gulian feels like a flinty, determined survivor. Holding its own, almost incongruously astride the banks of the Hudson, amid a contemporary grove of condominiums, the main house once served as a headquarters for Revolutionary War soldiers.

Extending over a century, it was the home of the Verplanck family, whose patriarch, Gulian Verplanck, a New York City merchant, had it built sometime between 1730 and 1740. The Verplanck family moved from Holland to New York in the 1600s, and their primary residence was in Manhattan. In 1683, Verplanck, along with Francis Rombout, acquired the Rombout Patent of 85,000 acres from the Lenape Indians.

Not a mansion nor ostentatious in any way, the original house was enlarged several decades later, with a stone foundation indicating that the most noteworthy features — the front and back porches that extend the full length of the house, and the gambrel roof — were added around that time. 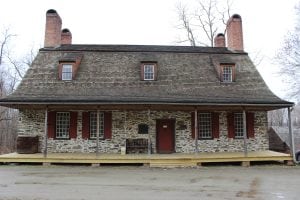 The home, an adjacent barn and an 1804-designed garden opened for the season on April 27. Tours are offered each afternoon four days a week through the end of October. This is Mount Gulian’s 40th year as a historic site open to visitors, yet many nearby are unaware of this National Historic Landmark, perhaps due to its location, tucked away where one wouldn’t expect it, off of Route 9D just north of Dia:Beacon and Main Street.

Elaine Hayes, Mount Gulian’s executive director, described the site as “different from other historic houses, because we have no velvet ropes up. In fact we encourage visitors to come in, look at artifacts close up and even handle some of them.” Hayes said the site is “small, but with lots of interpretive history: Native American, Dutch, Revolutionary War, Civil War, slavery, up to early 20th century.”

Visitors range from members of the public to some who come from as far away as Europe, school groups and descendants of the Verplanck family — one turned up recently from New Zealand, and a recent reunion drew around 50 participants.

During the Revolutionary War, Maj. Gen. Friedrich Wilhelm von Steuben turned Mount Gulian (temporarily emptied of the Verplancks because of the war) into his headquarters. On the morning of May 13, 1783, a group of officers of the Continental Army met at Mount Gulian to found the Society of the Cincinnati, a fraternal veterans’ organization formed originally to facilitate “fellowship, friendship and recognition for officer war veterans of the Continental Army,” which exists to this day; the New York chapter still uses Mount Gulian as its headquarters. 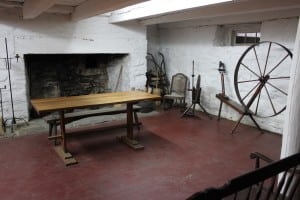 A large colonial kitchen, replete with hearth and spinning wheel, at Mount Gulian

Incredibly, the Verplanck family, returning to the home after the war ended, proceeded to live there until 1931, some years full-time. In September 1931, a fire attributed to a “hobo” occurred, destroying all but the foundational stonework with remnants of the walls, fireplaces and chimneys. Family members were only able to salvage some furniture, paintings and silver. The family found another home in the area, and the homestead lay dormant until 1966, when the Mount Gulian Society was formed by a combination of family members and the Society of the Cincinnati. They were able to reconstruct, hewing closely to the original design, aided by the many family descendants still alive who remembered how it was.

From 1966 to 1975 they worked on reconstructing it as faithfully as possible, discovering, at one point, a large fireplace with a beehive oven in the northeast corner of the cellar. Mount Gulian reopened, this time open to the public as a historic site, a year ahead of the 10-year planned schedule, in June 1975.

In addition to the tours, Mount Gulian hosts several special events each year. Its very popular children’s “teas” are held in spring and during the winter holidays. The home is decorated and there are special candlelight tours during the holidays, as well. An annual fundraiser highlights a historic figure, and this June 13, the 20th annual “Dinner and Conversation” will feature — along with period music — an actor from Philadelphia’s American Historic Theater portraying Thomas Paine. Attendees at the candlelight dinner held in the barn will be asked to “join in toasting this unsung hero.” A menu will feature cuisine from the Revolutionary War era, including soup from fiddleheads and “Martha Washington’s rice pudding” for dessert. 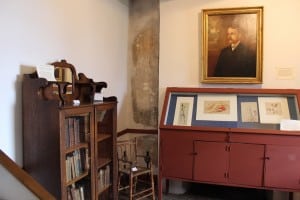 Much of the period furnishings was donated by present-day Verplanck family members.

New to Mount Gulian this year is a James F. Brown Day celebration, to be held on Sept. 5. Brown, an escaped slave from Maryland, managed the Mount Gulian garden from 1827 to 1866, keeping a 40-year journal recording “riots, epidemics, steamboat races and explosions, visitors to Mount Gulian, births and deaths, as well as daily calendar of weather, planting and cultivating,” according to notes from the site. 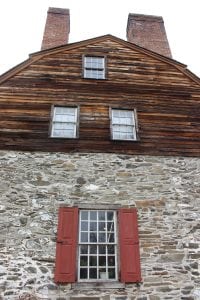 Mount Gulian’s distinctive gambrel roof; the stonework below was all that remained after a devastating 1931 fire.

To celebrate Brown’s life, there will be guest speakers, including Myra Young Armstead, a history professor at Bard College, who has written a book on Brown, and historian Michael Groth, who will talk about the Underground Railway.

Mount Gulian operates as a private nonprofit. Their funding comes from members, admission fees and grants. There are frequent visits from school groups, with several programs specific to state curriculums offered. To sustain the house, the site also allows weddings; hugely popular, there are already 14 booked for 2015, which is more or less the limit.

“This enables us to carry out our education and preservation mission,” said Hayes. “The challenge is to balance it. We deeply appreciate the income, which allows us to do capital improvements (the porches are currently being restored) and maintenance, but we also draw a line, recognizing it first and foremost as a piece of history.”