This article first appeared in The Current (then called The Paper) on Oct. 31, 2014. We thought it was worth another read.

Dates and some details have been changed to protect the guilty, and the innocent

Aug. 1, 1999 — At our home closing today, something curious occurred. After the signing of about 450 documents, pretty much none of which we understood, and the loss of all our foreseeable cash assets, the now-former owners gave us what might be interpreted as an ominous warning: “Be sure to put a couple of hundred dollars away right now, for Halloween” … “Why?” … “Didn’t anyone ever tell you what Parrott Street is like on Halloween?” I feel sure that what followed was a rather maniacal laugh … perhaps one might have charitably called it a cackle.

View looking out from the house at just a fraction of the trick-or-treaters who turn up on Parrott Street each year.

Oct. 31, 1999 — I write this in the enfolding darkness, terribly ashamed. We made what we thought were ample provisions as directed: “Nearly all of the village’s children will turn up on your street.” But the village still seemed terribly small to us former city folk, thus provisions consisted of several largish bags of all things candied and colorful and then — in a snap, a blur of cowardly lions, Darth Vaders and ghoulish cherubs surrounded us, chubby fingers quickly depleting our puny supply — yet there were droves still approaching and we had nothing to give them.

We retreated, literally dispirited, to the interior of our home, our turning off the lights an obvious ploy, the constant rapping by the sugar-hungry at our door for hours afterwards like something out of Poe.

Oct. 30, 2001 — This year I have joined a club! I have emerged confidently from Sam’s, lugging sack-like bags filled with things I haven’t eaten since third grade: Jujubes and Milk Duds and Pixie Stix, even! We shall feed all the marauding hordes this year! And we will do so cheerily too, because last year I went fright-seeing at all the other houses. And some of them were really scary — robed-figures-with-scythes-leaping-out-from-behind-hedges kind of scary. So I have decided that we will be the kind of house where the very littlest ones come, their parents cooing, “This house looks better; they look nice here.” Little do they know. Do you think anyone will notice that I’ve removed three-quarters of the Milk Duds and most of the orange Pixie Stix? 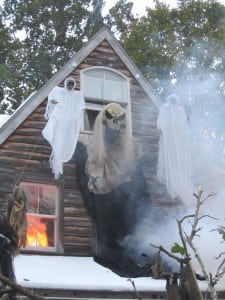 ‘That house on the corner of Parrott and Bank’ that always features spectacular displays, in a 2011 photo

Oct. 30, 2003 — If there was a Parrott Street Halloween Distribution Statistics and Probability course, we would be acing it by now, as we have it down cold. Here’s how it goes: as the number of trick-or-treaters and their entourages is well over 1,000, gone, alas, are the days of “the good candy.” Sorry, Hershey’s, we can’t afford you. For if we spent it all on you, what would be left to make our yards look so terrifying?

We’ve learned that Tootsie Rolls and lollipops are the most budget-friendly, but the scornful stares of teenagers as they spot a lollipop being dropped into their loot sack are too scary to deal with. Solution: we now escalate upwards: 5 p.m. toddlers = lollipops, 6 p.m. little kids = Tootsie Rolls, 7 p.m. older kids = little bitty boxes of better stuff, 8 p.m. roving teenagers = the candy you really want to eat from the couple of bags so kindly donated by the community.

Oct. 31, 2005 — So upset. Was told in no uncertain terms by all three of my children that “our house is the most boring Halloween house and it’s embarrassing. We need to fix it.” They informed me that the cheery banner with the cockeyed pumpkins and orange “Happy Halloween” lettering has to go because it makes them cringe. They told me we need carcasses, tombstones, a fog machine and more furry stuff dangling from the trees. They despised being the nice house. Oh all right, next year we will ramp it up.

One of the many homes on Parrott Street, decorated for Halloween, shown in a 2011 photo.

Oct. 31, 2006 —Hats off to me because I had the greatest idea of all time: ghost hosts. Suckers, I mean people, who think being a Parrott Street family on Halloween is the ultimate in fun have actually paid good money to the Haldane School Foundation at a silent auction in exchange for taking over our house for the occasion, while we sit inside, sipping cider and consuming the chocolate we have stolen from our children’s stashes. (“But I thought you didn’t like Kit Kats?” my husband brazenly lied to our middle child.)

True, after an hour the ghost hosts told us it was more exhausting than they expected, and the words “but it’s still kind of fun” trailed off and were spoken with great insincerity. Somehow, I don’t think they’ll come back next year. They never do. 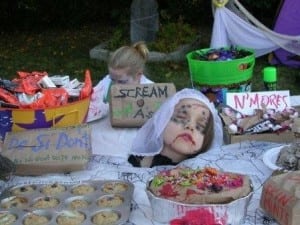 Oct. 31, 2008 — What’s scarier than a gaggle of ghouls? Girl Scouts, that’s what! I have schemed and determined that roping in, I mean recruiting, an entire troop to encamp on our front lawn and take over the proceedings is the way to go. Well, these young hobgoblins have embraced the idea with gusto and are holding a “fake sale” with “alternative” cookies: Skin Mints and Do-Si-Don’ts, Scream-oas and No’Mores and, dearie me, there are buckets of spiders and a (live, but dead-looking) head sticking up through the table… What badge will they earn for this? I shudder to think.

Nov. 1, 2009 — After two years pardoned, I was back on the job and ramped up outstandingly, though maybe I shouldn’t have bought the fog machine on eBay because you couldn’t really call what emanated from it fog. However, in the harsh light of dawn I had to admit that we were but a pale imitation of the thrillingly nightmarish visions from down the street, especially that place on Bank, which I think all the other houses should get an exemption from competing with because the dad’s like a architectural lighting designer or something.

This Parrott Street alley, shown in 2012, is always good for a scare or two.

Oct. 31, 2010 — We are close, but no cigar on the fright-o-meter, even with the addition of my son and other teenagers simulating dead zombies as they lay prone, ashen-faced, in the grass in the front of our house. Yet again though, I brim with ideas, few reaching fruition. I remain steadfastly convinced that next year, finally, we are going to be the Most Horrible of Them All. No more Mister Nice Family. There were these great huge stuffed rat things with realistically coarse, stringy hair I saw in a store window last week and I went out this morning after wiping the shaving cream off the stone wall and picking up all the discarded, squished caramel things that resemble water bugs dotting our driveway and purchased probably too many of the rat things.

Oct. 19, 2013 — Can it be almost a year already? I’m just so not into it. Can’t Halloween travel to different streets each year, like the Olympics? Or can it be moved to June or some other balmy month? I don’t feel like pulling the decoration bins out of the garage, the temperature has plummeted just this week, the kids think helping is uncool, most of the bulbs on the lights are out, my headache is inevitable and, yet again, I did not think about costumes on time — I’m saying an early “Bah humbug.” Big scary humbugs. Wait, maybe we will go as humbugs! What is a humbug? Let’s make humbug costumes! Actually I’m excited now. A little.

Always a big draw: the house at Parrott and Bank, shown in here in 2011.

Oct. 31, 2013 — This was the best year ever. I went into it with blatant hostility, and the wind whipping down Parrott in tornado-like gusts all night didn’t help, but I have admit that I had a twinge, after packing away the severed fingers, the vampire — half of whose face got crushed but it somehow makes him better, the Graftobian theatrical makeup in those special shades of green, the dancing skeleton who works some years doesn’t others, the cobweb earrings that my daughter always steals, and all the ravens — they seem to breed, even though they’re inanimate. Seems a pity that we have to wait a whole year before doing it again.

April 5, 2014 — The daffodils are blooming, the temperatures are beginning to climb and of course my thoughts immediately go to Halloween. This year we will be completely creative. I need to start thinking now! We will construct a coffin that someone will rise from periodically, we will make a fabulously creepy mix tape, we will assemble look-alikes from the town to play the Addams Family, we will, we will, we will!