Photographer stakes out scenes that are gone in a flash

Fed up with the jargon of typical artists’ statements, Ross Corsair, whose photos are part of a Gallery 66 NY exhibit that opens Friday, Nov. 4, prefers to let writer Paul Bowles answer the question, “What does photography mean to you?” 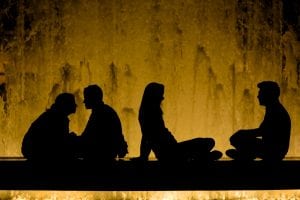 Corsair, who lives in Cold Spring, will join Lisa Cullen and Lonna Kelly in Getting This Show on the Road, an exhibit loosely gathered around the idea of sidetracking and maybe not always reaching the original destination. The photographer says he is intrigued by the idea of preserving fleeting moments. “My photos invite someone to ask what’s going on in them,” he says. “Nothing is ever staged. It’s always caught.”

Corsair, who works as a television and documentary camera operator and cinematographer, says he spends 90 percent of his waking hours with a still camera at the ready. Usually he happens upon a moment that becomes a photograph, but sometimes he discovers an intriguing spot and returns with the hope that something visually fortuitous will occur. 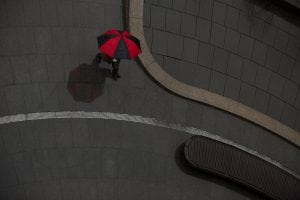 That is what transpired in his “red umbrella” photo. Attracted to the background, he came back four times. Perched in the rain, “on scaffolding that isn’t there anymore,” he waited. “I didn’t know there’d be a red umbrella. I took 100 photos. The other 99 were miserable or just not interesting.”

Corsair calls photography his way of “connecting with the world. Some friends of mine do yoga, some do chanting; this is my way.” He also works on many collaborative projects “where I’m not the only one, but taking the photo is ‘just me’,” he explains. 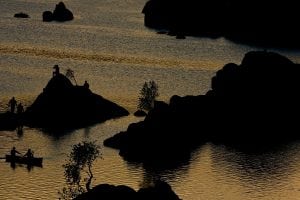 Corsair grew up mostly overseas; the child of a diplomat, he moved 23 times before the age of 17. “We’d go by plane, but all the toys would go by ship,” he recalls. “By the time they got there we were on to somewhere else.” Seeking community as a college student, first at Sarah Lawrence and then Columbia, he gravitated to the theater department and its “artists and misfits. I found a lot of places in the world to be violent and chaotic. But the theater was a safe place, even if the content was violent.”

Theater led Corsair to films when a fellow Sarah Lawrence student asked him to help shoot a film. The film got enough attention to land its director a deal for a low-budget feature, which Corsair filmed. More work followed, although “sometimes you’d be working eight months in a row without a day off, other times there’d be eight months with nothing,” he says. 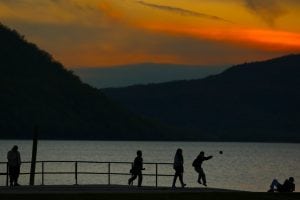 Corsair moved to Arizona, which had become a favorite site for filmmakers because of tax incentives the state offered. That opportunity dried up after a change in the tax law, and he returned to New York City. A few years later, he relocated to the Hudson Highlands, having visited friends here and appreciating the close-knit community.

During and since that time, Corsair has worked on independent features, shorts and documentaries, most recently as a camera operator for Mind of a Chef on PBS and the documentary Best Worst Thing That Ever Could Have Happened, which screened at the 2016 New York Film Festival. He also shoots the occasional photo for The Current and earlier this year won a New York Press Association award for an artistic shot of a kayaker in the Hudson. 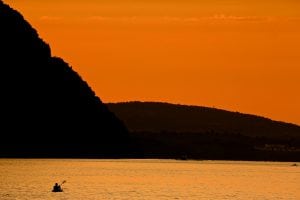 Getting This Show on the Road also features Cullen’s abstract paintings and collages, many of which incorporate paths or roads, seemingly twisted and convoluted yet with underlying structure. Kelly uses the road image symbolically in photos reflecting the long and twisted path  taken to realize the possible ascent of the first female U.S. president.

The exhibit will run at Gallery 66 NY, which is located at 66 Main St. in Cold Spring, through Nov. 27, with an opening reception from 6 to 9 p.m. on Nov. 4. The gallery is open from noon to 6 p.m. Friday through Sunday. To see more of Corsair’s work, visit rosscorsair.com.

One thought on “A Lasting Search for Fleeting Moments”