Will Trump victory put a crimp in Mid-Hudson plan?

Inspired by a visiting scholars program at Vassar College in the 1930s that helped save Jews fleeing the Nazis, professor Maria Höhn and her students earlier this year reached out to groups that resettle refugees in the U.S. from war-torn regions of the world.

Höhn and her students have since partnered with dozens of congregations, synagogues, mosques, universities and community groups to form the Mid-Hudson Refugee Solidarity Alliance. Through a partnership with Church World Service, one of nine organizations that works with the U.S. Department of State to resettle refugees, the alliance hopes in January to begin welcoming displaced citizens, most likely from countries such as Syria, the Democratic Republic of Congo, Iraq, Somalia and Myanmar, to the region.

The plan was presented to a packed house Nov. 6 at a meeting on the campus of the Poughkeepsie-based college. Under the program, refugees could be settled anywhere within a 50-mile radius of Poughkeepsie, which would include the Hudson Highlands.

The Refugee Processing Center at the Department of State resettled 554 refugees in New York state in October, including 37 from Afghanistan, 28 from Burma, 95 from the Democratic Republic of Congo, one from Iran, 39 from Iraq, 13 from Pakistan, 138 from Somalia, 60 from Syria and 30 from Ukraine.

The program is not without its critics, as was evident  during a question-and-answer session at the Nov. 6 meeting. A handful of protesters angrily demanded to know how residents can be sure incoming refugees won’t have communicable diseases, how to be sure they are actually refugees as opposed to would-be immigrants who are not fleeing a political situation and why the resources of social services organizations and municipal funds should be used to assist refugees instead of U.S. citizens. Some protesters had to be escorted from the room while shouting “Liberalism is a disease!” 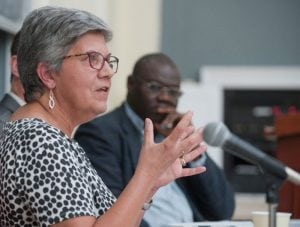 Maria Höhn, chair of the history department at Vassar, speaks in Oct. 2015 at a ”Solidarity with Refugees” forum (Vassar photo)

“We knew that not everyone would be on board with this,” Höhn said in an interview a few days later. “We need to do a good job now assuring people that refugees are thoroughly vetted for security reasons, for illness, and to assure people that we have done this before. This is what Americans do.”

Roisin Ford of Church World Services said that “refugees are the most vetted of any travelers” coming into the U.S. The process involves several medical examinations before and after arrival, fingerprinting and clearance by groups such as the FBI and State Department. 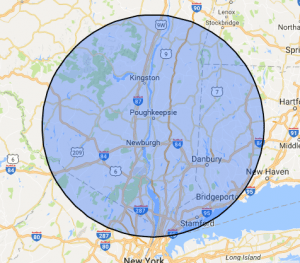 Refugees could be settled anywhere within 50 miles of Poughkeepsie.

For Höhn, who chairs the history department at Vassar, refugee crises used to just be something that she taught in class.

“I can’t tell you how many times I would teach about the millions of Jews trying to flee Nazi Germany, and it all seemed so abstract,” she said. As the current global refugee crisis expanded, she and her students noticed the parallels between what they read in their textbooks and what they saw in their newspapers, specifically the resistance to accepting refugees in the U.S.

“We know from surveys that were conducted in 1938 and 1939, when the writing was clearly on the wall about what was going to happen to Jews in Europe, 67 percent of Americans said absolutely no to taking in Jews as refugees,” she said. “Jews were considered to be ‘Trojan horses,’ possible Nazi spies, communists and anarchists. So as someone who teaches that, it’s very painful to see this all playing out again. Since World War II, we always say ‘Never again,’ but what does that mean to say ‘Never again?’ ”

Those who wish to assist the Alliance can donate furniture, volunteer to be language tutors, give refugees rides or commit to employ refugees. One of Church World Service’s goals is to have all refugees be self-sufficient within six months.

“You can be a welcoming team with a congregation,” said Maria Höhn. “They have people who are retired or semi-retired, people with deep roots in the community, they know the stakeholders, they know where you can go. Even saying ‘I have an apartment complex and I will rent for the first three months, I’ll subsidize the apartment,’ or people who need clothing. They come from very warm regions, like Africa; they need winter clothing! There’s many ways that people can show love, and show that this is what we do in America. We build communities from the ground up.”

The alliance will continue to hold informational meetings, including one scheduled for Thursday, Nov. 17 at 11:30 a.m. at St. George’s Episcopal Church in Newburgh.

There are an estimated 65 million displaced people in the world, including 20 million refugees, according to Sarah Krause, a refugee program administrator at Church World Service, which will soon open a branch office in Poughkeepsie. (“Displaced” means you have fled your home due to a well-founded fear of being persecuted; once you cross an international border you are also a refugee.) Krause said that despite perceptions that refugees are flooding Europe and the U.S., most prefer to stay close to home with the hope they can someday return.

Cyprus police rescued 123 migrants believed to be Syrians who were left adrift off the island’s northwest coast by a boatman who made off on a jet ski, officials said. (Photo by Iakovos Hatzistavrou/AFP/Getty Images)

“In Lebanon one of every five people is a refugee, and in Jordan it’s one of four,” she said. “Meanwhile, the United States has accepted less than half of 1 percent of the world’s refugees.”

Last year Church World Service and other resettlement agencies settled 84,995 refugees in the U.S., five short of the limit President Obama set for the number of refugees accepted in 2016. Obama raised the limit to 110,000 for 2017.

Of course, everything changed Nov. 8. President-elect Donald Trump has said he will limit the number of refugees coming into the U.S. because of fears of Trojan horse attacks in which terrorists sneak into the country. During a Nov. 6 campaign stop in Minneapolis, Trump said: “Here in Minnesota, you’ve seen firsthand the problems caused with faulty refugee vetting, with large numbers of Somali refugees coming into your state without your knowledge, without your support or approval, and with some of them then joining ISIS and spreading their extremist views all over our country and all over the world.”

Trump also criticized Hillary Clinton for proposing the number of Syrian refugees admitted annually be increased to 65,000 from 10,000 and vowed to “pause admissions from terror-prone regions of the world.”

One thought on “Group Hopes to Bring Refugees to Region”