In 2014, after 20 years as a reporter for The Wall Street Journal, Garrison resident Gwendolyn Bounds took a leap: She joined Consumer Reports and began commuting to Yonkers to run its video department.

Two years later, Bounds, who is best known in Philipstown for her 2005 book about the former Guinan’s pub on Garrison’s Landing, Little Chapel on the River, has risen quickly and now oversees all content, including the magazine and website (which together have about 7 million subscribers) and television and video programming. To maintain its independence, the nonprofit magazine and site accept no advertising and refuse to allow manufacturers to use its name or ratings as an endorsement. 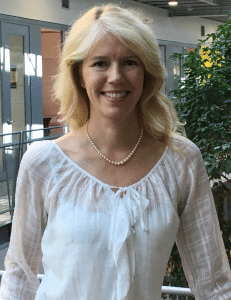 Bounds recently took a break from what she describes as a typically “insane” schedule to greet me at Consumer Reports headquarters with a smile and brisk handshake. We toured the testing labs, including the thickly padded anechoic chamber where speakers are evaluated; the television lab, where experts were scrutinizing the blackness of a dozen screens; and the washing machine lab, where swatches of stained fabrics were undergoing standardized abuse.

As a child growing up in North Carolina, Bounds says she remembers her parents consulting Consumer Reports before any crucial purchase. In Pittsburgh, where she worked as a reporter after graduating from the University of North Carolina, she turned to the magazine before buying a car, and during her 20-year tenure at the Journal, she became so curious about the publication and its mission that she wrote an article about it in 2010 after visiting the Yonkers labs.

But it was the transition from renter to the owner of a ramshackle Garrison home in 2003 that Bounds says best prepared her for Consumer Reports. “My first housewarming gift from a neighbor was a chain saw,” she recalls. “I thought ‘Whoa, I’m never going to use that!’”

She soon found the responsibilities of renovating the house and caring for its land became an education in what matters to millions of consumers who don’t live in city apartments. “When you own a home and you’re using snow blowers and power tools, you understand a consumer-product portfolio in a different way than when you’re renting in the city,” she says, letting some industry lingo slip in. “I came to have incredible respect for the longevity of tools and products — I actually have three chain saws!”

Consumer Reports has three branches, Bounds explains. One is the testing branch, which buys every product at retail stores and puts each through unforgiving evaluations. The second is content, which crafts the magazine pieces and web and video content. And the third is advocacy, which uses the testing and editorial to lobby for consumer protection laws. 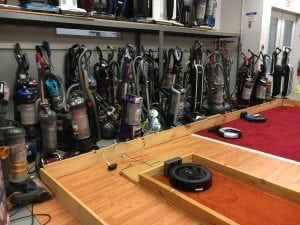 “The testers’ depth of knowledge and care for what they do is unlike anything I’ve seen,” Bounds says while sitting in her Yonkers office, which overlooks a timbered hill and includes a photo of a Garrison farm. Of her own team — 135 people report to her — she expresses respect and gratitude. “Being a journalist here is a privilege and a great responsibility because you are informing people about some of their most important purchasing decisions and you can’t take that lightly,” she says. “The journalists reporting up through my team are some of the best, and they take their mission very seriously.”

Snow blower
Mine’s a two-stage gas Craftsman model with a 28-inch clearing width, and I bought it in 2008 after realizing the snowplow service would inevitably leave all my driveway’s gravel in piles, which then had to be redistributed every spring. Not so fun. I love the strategy involved in clearing snow properly — it’s like a game — so much that I sometimes do my neighbor’s driveway.

Coffee French Press & Burr Grinder
Using these tools adds an extra five minutes in the morning, but it’s worth it. As a journalist, I never feel like I get enough good coffee.

1999 BMW 323i
I bought this manual transmission car when I first moved to Garrison after 9/11 and can’t bear to part with it. Fortunately, despite its age, when I take it to the Consumer Reports auto test track, the testers think it’s a very cool car.

Chain saws
When I first moved here, a gracious neighbor gave me a gas Stihl Mini Boss as a housewarming present. I thought it was a joke. They said, “Trust us!” And when the tree limbs started coming down after the first storm, I got some chaps and a lesson from John Guinan and Lew Kingsley. Now I’ve added an electric model and battery-powered one for smaller jobs.

WaterRower
If you watch House of Cards, you know this is Frank Underwood’s secret workout weapon. There aren’t a lot of close gym options living in the woods, so I’ve built my own at home. This machine’s design is elegant and it gets bonus points for its “Very Good” rating by Consumer Reports.

This year, Consumer Reports is marking its 80th anniversary with a rebranding that includes a new moniker (CR), logo and ratings design.

“Everything we do is for the consumer,” Bounds says, noting that her job also involves gathering feedback through social media and e-mail from consumers about their experiences with products. One of her favorite examples of this was the “Bendgate” controversy in 2014 when the internet exploded with complaints that the iPhone 6 and 6 Plus were bending. Consumer Reports testers responded by subjecting iPhones and other models to compression tests before reporting confidently that the iPhones weren’t as bendy as feared. 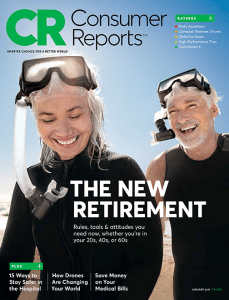 Bounds also says she is particularly proud of stories focused on broader marketplaces such as health care. A report on “superbugs” examined the risks of overusing antibiotics. Another project (named a finalist for a National Magazine Award), “A Beautiful Death,” told the story of a retired New York dentist with terminal cancer who decided against being a consumer of health care services such as chemotherapy so he could focus his final days on family and friends.

Pushed north by the 2001 attacks on the World Trade Center, which damaged her lower Manhattan apartment and The Wall Street Journal offices, Bounds drifted to the Highlands, expecting someday to return to the city. But she says she began to feel such a strong connection to Garrison that when she learned Jim Guinan, the beloved proprietor of Guinan’s, was struggling to keep the pub and market going, she began helping out behind the counter.

“People spend most of their lives searching for a place they truly feel is their home, and every fiber of my being is now rooted to the Hudson Valley,” she says. “I don’t drive across the Bear Mountain Bridge without thinking how lucky I am.”

Scenes from inside the Consumer Reports test labs