After a move to Northern Ireland, painter finds light in blackness of birds

After living in New York City, then in Garrison, for 25 years, Wendy Lindbergh — a granddaughter of aviator Charles Lindbergh and author Anne Morrow Lindbergh — moved with her daughter to Northern Ireland two years ago to a place where the family of her husband, painter Hector McDonnell, has lived for generations.

The difficult dynamics of maintaining lives on two continents contributed to the move. Living in a rainy, windy glen on the North Channel between the Irish Sea and the Atlantic, water surrounds Lindbergh, and she has found that the change in geography has decompressed her sense of time. 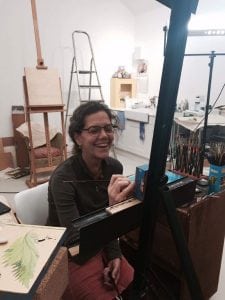 She turned to painting to “open space” for herself, and a selection of her recent works, Luminous Ground – the shared field, will be on display at the Theo Ganz Studio in Beacon through Saturday, Dec. 31.

The show contains numerous images of birds, some of which are based on the work of noted photographers. Two paintings of ravens serve as centerpieces. There are also landscapes of sea and sky, and depictions of droplets of water and pebbles. 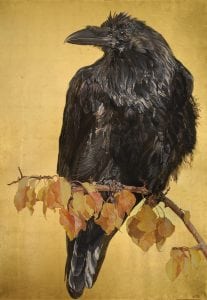 Autumn Raven, by Wendy Lindbergh, from a photo by Alan and Sandy Carey (photo by Howard Goodman)

In expansive studio space borrowed from a friend, Lindbergh began painting on 4-inch by 4-inch blocks, envisioning, at first, a tribute to the song of the Swanson’s Thrush, which she describes as a “haunting rising spiral of sound that echoes through the now diminishing forests of my childhood in the West.” But within the large space, Lindbergh says she found herself painting larger images, turning to corvids, the family of birds that includes crows, jays, magpies and ravens.

Lindbergh’s admiration for the birds is “rooted in their canny ability to prosper alongside humans, reflecting us darkly,” she says. “Immersed in the iridescent inflections of their blackness, I came to understand that the greasy, colored shine of their feathers can signal a change of consciousness. And that darkness is a place where healing can be accepted.” 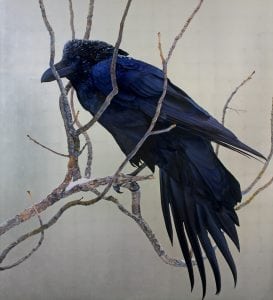 Raven in Snow, by Wendy Lindbergh, based on a photo by Jim Brandenburg (photo by Howard Goodman)

Most of the paintings in the show incorporate gilding techniques using gold and silver leaf, a skill Lindbergh learned while doing a decorative project. “All metals return light to our eyes in a way that creates a sense of space,” she says.

Having studied painting with abstract expressionists at the University of California at Berkeley and Stanford, where she earned a degree in art history, Lindbergh credits years she spent in Paris in the 1980s with her true education. “On a shoestring life, I devoured a huge amount of music and met the informative painters R.B. Kitaj, Sandra Fisher and, most important, Avigdor Arikha,” she says. 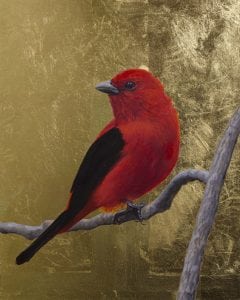 These days, Lindbergh says she is inspired by the “mysterious candor” in late medieval and early Renaissance paintings and the stillness of 18th-century Japanese screen painting. She finds herself “drawn to subjects that seem to offer themselves as vehicles for further thought, or that might open a line of questioning.” For example, she says: “How can I keep steady in the midst of continuous fluctuation?”

Lindbergh invites viewers to experience her works by looking both at the details and the expanses. “The landscapes we inhabit are part of a huge breathing being,” she observes. “In the words of Wallace Stevens: ‘Among 20 snowy mountains, the only moving thing was the eye of the blackbird.’ ”

Theo Ganz Studio, located at 149 Main St. in Beacon, is open Saturdays and Sundays from noon to 5 p.m., and by appointment. For more information visit theoganzstudio.com or call 917-318-2239.

One thought on “The Ravens”