Vincent Tamagna, the transportation manager for Putnam County, came under fire from legislator Dini LoBue at the Dec. 14 Physical Services Committee meeting when she criticized the county bus service. The routes run through the eastern part of the county, including in Brewster, Carmel, Mahopac, Kent and Patterson. 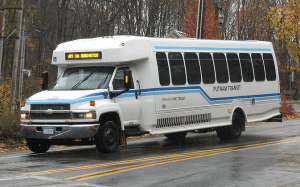 LoBue, who represents Mahopac Falls, said drivers and riders have complained to her about buses running late, vehicles being taken offline for repairs and a change in routes and schedules. “It doesn’t seem like it’s being managed properly,” she said.

Tamagna, a Cold Spring resident and former county legislator who represented Philipstown, rebutted LoBue’s claims, saying his office receives only six or eight calls per month – out of 110,000 trips per year – from riders with concerns.

Tamagna said the system has breakdowns in part because of its aging fleet. Eight buses are approaching 200,000 miles but that the federal government – which pays 80 percent of the asset – will not cover the cost of new vehicles until they reach that mile mark.

The county ended its contract in 2014 with First Transit and hired MV Transportation, saving a reported $1 million. The agreement continues until 2019, with three additional one-year renewal options. LoBue, however, said that with First Transit, the county purchased maintenance parts so it could track the parts and knew the fleet was being maintained. Now, with MV Transportation, she claimed, trucks are breaking down and being stowed at the planning department headquarters because the bus company doesn’t want to repair them in a timely fashion.

“It has nothing to do with the age of the fleet,” she said. “It’s about the contract that we now have with this new company,” she said. “This is mismanagement, and something is terribly wrong.”

Tamagna said that, outside of a bus that was rear-ended in early December, no buses have been towed, so he was not sure where LoBue got the idea any were being stored at the planning department. Further, he said, “we have a much better handle on parts.” He called the arrangement with MV Transportation “genius” because the county pays for maintenance as part of the cost per mile. “That’s how we ended up saving $1 million,” he said.

“This, to me, is just like a whole world of ‘Let’s make things up and let’s throw facts out that aren’t really facts,’ ” Tamagna said. “And you can check the schedule – the schedule hasn’t changed since 2012.”