Impatient in Philipstown asks: “I’m anxious to start gardening. What can I do now to prep for spring? When can I start sowing seeds indoors to transplant?”

For me, these swings in the weather make it hard not to think about an early planting season. On days when it’s 55 degrees and sunny with no snow, it definitely brings up the urge. It’s still January, though, and we’re a long way from the last frost date on May 15. Winter can still happen.

Prep and maintenance can be done on balmier days when it’s nice to get outside. If you haven’t attended to mulching yet, do it now. We’ve had big temperature shifts and the cycle of freezing and thawing is tough on plant roots. When the water in the soil freezes and thaws, it contracts and expands. We’ve had both conditions — lots of precipitation and rapid temperature changes. Shallow rooted plants and perennials can get pushed above the ground, exposing the roots to freezing. The damage can kill the plant or keep a bulb from producing. 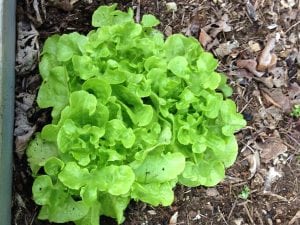 It’s not quite time to plant lettuce yet, but one can dream. (Photo by P. Doan)

Mulch helps keep the soil warmer on bitter cold days and cooler on hot days, holding in water, as well. Check any new plantings, tree seedlings, shrubs and flower beds. If you see that telltale heaving disruption, covering the area with straw or other mulch will help. A 2- to 4-inch layer will make a warm blanket. Be sure to push it back from the base in spring for new growth to come through.

Compost is something else you can work on now to have a good supply by spring. Winter composting can be challenging but there’s no reason to stop. A worm bin, also known as vermiculture, is one method that can be done inside during winter and results in a rich soil amendment in time for spring.

You can make a worm bin from a plastic tub or buy one made for the purpose. Order worms from online suppliers and let them start eating your vegetable and fruit scraps, paper, newspaper and plant trimmings. Worm poop makes good soil. Worms can’t survive in a worm bin left outside in our winters but it won’t smell and can be kept in a basement.

Another alternative is to maintain your compost pile during the winter, which is what I do. It freezes but as soon as conditions improve, it quickly breaks down. I have a three-bin system and in midwinter I’ll stop adding to one and move to a new one. That way I’ve got compost moving at different stages for the growing season.

Pruning dormant trees and bushes can be done in mid- to late-February. Some trees that are affected by a pest or pathogen have better results if pruned in winter but seek advice from an arborist on the best strategy for the particular problem.

Blueberry bushes will thrive when pruned in late winter, as will bushes that flower in summer on new growth. The basic rule is to prune things that produce flowers or berries on new wood in winter and to prune things that produce on last season’s growth right after it finishes blooming. To use two common landscape bushes, prune the butterfly bush in winter and the forsythia in late spring.

As for starting seeds indoors, it’s still early for that. Depending on the type of plant (I’m assuming vegetables), you’ll need to check germination times and days to transplant on the seed packet instructions. Some of the earliest vegetables that can be planted in spring are beets, broccoli, kale and peas. Most of these can be sown directly in the soil and don’t need transplants.

To get a head start, plant seeds in a sterile medium inside four to six weeks ahead of when you think you can transplant them. Let the seedlings harden off for a week or two before moving outside to avoid damaging them. You don’t want to undo all the work you did by shocking them. Hardening off means letting them adjust to a new location and temperature slowly, a gentler process than the term implies.

Finally, order some seed catalogs! Being impatient to get going isn’t fun but planning the new garden may be enough fantasizing to get you through the next few months. Sketch and plan out this year’s harvest. Dream big. Then look around for some classes. There are usually many offerings from the Cornell Cooperative Extension, Stonecrop Gardens and the New York Botanical Garden, to name a few.

One thought on “Roots and Shoots: Is It Spring Yet?”