How to “defrock” bogus information in digital media age

Most of us read things in the news that make us mad. Fire-poker, red-hot mad. Or the kind of mad that sparks a cool commitment to action.

Before you respond with an angry tweet or join a movement, check where the story came from. It’s a lot of work, but the gatekeepers in the legacy media aren’t present in all media. And gatekeepers make mistakes, too. If you prefer facts, hone your digital-literacy skills.

That was the takeaway from a forum at the Desmond-Fish Library in Garrison on Jan. 10 led by “cybrarian” Pam McCluskey and journalist Andrew Revkin. It was a timely discussion in a week where the president-elect was entrenched in a Twitter war about the role of Russia and hackers in the election.

The mixing of reporting, opinion and propaganda isn’t new, but today we have a stealth tabloid press. Rather than screaming headlines, we see tags on news pages that lead to “sponsored” content. At worst, there are entirely fake news sites that exist solely to generate clicks and revenue.

How can anyone tell the difference? 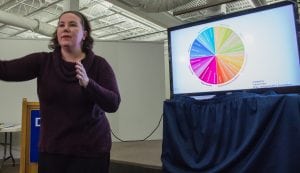 Pam McCluskey of the Desmond-Fish Library shows a chart dealing with digital “pollution” — a project of the infollutionZERO Foundation. (Photo by A. Peltonen)

Scores of online stories are made up, exaggerated or positioned to generate ad revenue, damn the torpedoes. Eyeballs are easier to attract than subscriptions, McCluskey noted, and news aggregators such as Yahoo!, Hotmail, AOL and Google thrive on the ad dollars they make around people who have email accounts with them. They won’t let go of a model that makes them billions. The same goes for news sites, too.

McCluskey said she teaches adults and children to identify and detoxify invasive stories and to stop contributing views to unwanted advertisers and fake-news content. You can’t beat them, she said, but you can learn which tools to use to fight back.

Although online publishers hate them, free programs such as Adblock Plus can prevent you from seeing invasive promotions. She also suggests sleuthing out Web addresses — if they end in an odd domain such as .com.co, or if a news item is not reported anywhere else or by anyone reliable, beware.

“Your digital life is like driving safely,” she said.

Longtime environmental reporter Andrew Revkin, who lives in Nelsonville and who recently moved to ProPublica after a long career at The New York Times, asked attendees to think about how to build a culture in which “veracity is cool.”

Veracity is hard, he said, which is why the “legacy” (what some would call the “mainstream”) media has a disadvantage in the digital age: real reporting takes time. Even photos must be vetted. 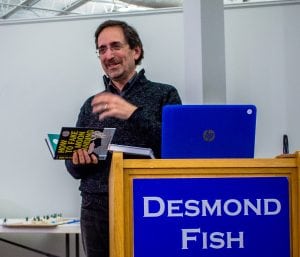 Andrew Revkin holds How to Fake a Moon Landing, for which he wrote the introduction, at a “Real News/Fake News” forum at the Desmond-FIsh Library (Photo by A. Peltonen)

Revkin suggests making veracity cooler by framing it as group detective work. He said he challenges students in his online-media class at Pace University to re-report published stories: to look at the information and photos and search for the original speaker and original photo. It’s a chain-of-custody hunt, he said.

Misuse of studies and scientific reports and graphics and photos are hot potatoes, too. For instance, he cited a graph of seismic patterns under the Pacific captioned to make readers believe the patterns represented radiation streaming from the Fukushima reactor accident site toward the western U.S.

Also worth looking into, Revkin said, is a free online course offered by the Stony Brook University School of Journalism’s Center for News Literacy (centerfornewsliteracy.org).

Sleuthing through the ages

To help children and teenagers who are growing up in an era of fake news, teach them to sleuth out what’s real. The search for “meaningful content is as important as looking out for bad content,” Revkin said. One technique is to have them keep and discuss a journal of items that provoke them, both good and bad.

A screenshot of newsmap.jp, as presented by Andrew Revkin, an application that “visually reflects the constantly changing landscape” of the Google News aggregator.

Meanwhile, what Revkin called “defrocking bogus information” is something you don’t have to do alone. Politifact has Truth-O-Meters and Snopes.com takes apart fake news, old and new. Local media is also important, he said, because if a herd of helicopters charges overhead, you won’t find out the why on a national site.

Finally, Revkin assured the group that sometimes “it’s OK to live in a bubble as long as you know the bubble is there.”

One thought on “Fake News Has Landed — What Can You Do?”