As a practical matter, the time and effort Cold Spring resident Charlie Ritchie has expended on his quest to restore a 1938 New York City fireboat would sink the most ardent of idealists. But the vessel, Fire Fighter, now a floating museum docked on the North Fork of Long Island, is not your run-of-the-mill fireboat.

Built by naval architect William Francis Gibbs, Fire Fighter was active on the Hudson River for 72 years. It fought more than 50 major fires, including those aboard the SS Normandie/Lafayette (1942) and Sea Witch (1973), and led the New York Fire Department Marine Unit response to the World Trade Center attacks, supplying water to emergency crews fighting fires at Ground Zero. The ship was not decommissioned until 2010, making it the longest-serving of the FDNY fleet. 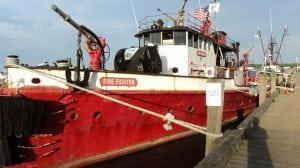 Despite being recognized as a National Historic Landmark, Fire Fighter languished until Ritchie, an outdoors educator, devoted himself and his spring and summer weekends to what he calls “a living and fully functioning example of the maritime history of New York Harbor.”

After receiving a number of grants, Ritchie’s nonprofit Fireboat Fire Fighter Museum (he serves as its volunteer president) has recently altered course. After 14 years at dock, Fire Fighter was taken from the water this month and towed to Rhode Island to have its hull repaired. The goal is to make the vessel seaworthy so it can ferry passengers.

Ritchie, who has never been a firefighter himself, chanced upon Fire Fighter while working in New York City for the Police Athletic League. He was supervising teenagers working as summer tour guides aboard historic vessels along the Hudson when he visited the Lilac, a former lighthouse tender being used as a dockside attraction. Intrigued, he landed a job on the boat, working on programming and its restoration. 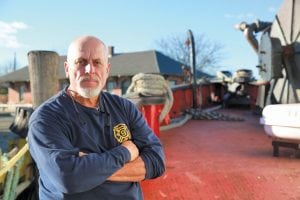 While there, he heard about Fire Fighter, which was soon to be retired. The consensus among his colleagues was that because of its esteemed history, it would receive many preservation grants. It was built because the mayor of New York City, Fiorello LaGuardia, “was crazy about fire equipment and fighting fires” and so contacted Gibbs to build a fireboat, Ritchie explains. “Gibbs was ‘the’ naval architect for decades, and for a long period of time designed about 75 percent of the boats in New York, including the SS United States, then the fastest ocean liner in the world.”

Despite working full time, Ritchie felt Fire Fighter was “a project I could get my arms around,” he recalls. It was ambitious but also “the right amount of challenge. We tell all our volunteers that it can be thankless and that they should feel that they’re ‘doing it for the boat.’ ” 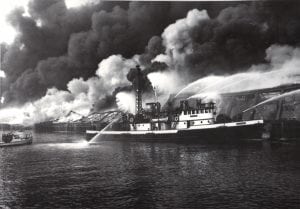 Initially the plans were to dock the fireboat along the Hudson or the Long Island Sound for tours and water displays. However, convincing the marina owners, borough presidents and others who control the docks from New York City to Peekskill and Cold Spring proved fruitless and/or was too expensive.

“It’s hard to get a place when it’s a museum which ‘owns’ it,” Ritchie says. “I expected more from New York City, as the boat is a city landmark. It was out of fire department control and nothing came through from the parks department, either.”

It was then Ritchie thought of Greenport, Long Island, a place he had visited, and one which met a couple of prerequisites, including being a growing tourism center. He was able to secure reasonable rent in a sheltered spot. However, the arrival of Fire Fighter proved contentious, with some residents questioning its seaworthiness and expressing concern that it represented an environmental hazard. 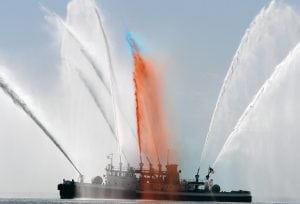 “We weren’t very popular for the first year and a half, because of the rumors,” Ritchie says. “But we survived that, as they were proven untrue. Now we’d like to stay in Greenport forever, but who knows?”

Over the past couple of years the museum secured funds needed to restore the boat, including an $80,000 National Maritime Heritage Grant from the U.S. Department of the Interior and a $414,000 state Environmental Protection Fund grant with a matching challenge of 25 percent, something the museum was able to meet with a mixture of donated labor, paint (including $40,000 worth from Long Island’s International Paints) and funds. 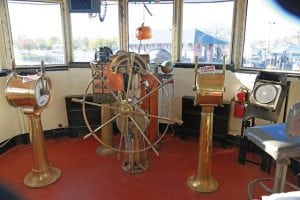 One of the mostly restored sections of Fire Fighter is the wheelhouse. (Photo by Krysten Massa / Suffolk Times)

There was one hiccup with the state grant, which was “reimbursable,” meaning the museum had to first spend the money. That proved difficult because the upstart nonprofit had trouble securing loans. Greenport businessman Charlie Reichert stepped in to lend the funds and, through the Charlie and Helen Reichert Foundation, pledged a matching grant of up to $50,000.

This funding, along with donations collected from tours, which are given from 11 a.m. to 5 p.m. every Saturday and Sunday from April to October, merchandise sales and an online fundraising campaign, have kept the museum afloat. 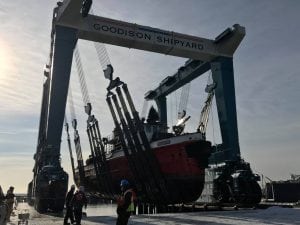 Fire Fighter at the Goodison Shipyard in Rhode Island. She had not been out of the water since 2003 (photo courtesy Fireboat Fire Fighter Museum)

An inspection after its arrival in Rhode Island revealed Fire Fighter to be in great shape — a tribute, Ritchie says, to the shipbuilders. Come spring, the hope is that the vessel will return to Greenport under its own power and with a new paint job to again welcome visitors.

Ritchie says that all the effort, including long trips back and forth between Cold Spring to Greenport during most weekends in the spring, summer and fall, has been well worth it. “It’s history,” he says.

To learn more about the Fire Fighter, visit americasfireboat.org. To donate to the restoration effort and for other costs such as fuel, docking fees and the overhaul of the 78-year-old engines and pumps, see gofundme.com.

One thought on “The Hudson’s Favorite Fire Fighter”