Made-to-order shop in Beacon is an instant hit

A family effort, many years in the making, has brought more donuts to Beacon. And with all due respect to other sweet treats, these are not your average deep-fried rings of sugary dough.

Lisa Tompkins, who owns Glazed Over Donuts on Main Street with her husband, Ron, describes getting a snack on a beach trip with her family almost 20 years ago as the impetus for the shop, which opened last month. 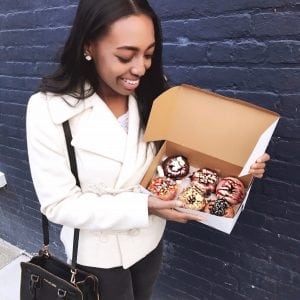 Raquel Ringgold, a senior at Our Lady of Lourdes in Poughkeepsie, after a donut run with her mother to Glazed Over in Beacon. (Photo provided)

“When our kids were young, we were at the shore and we stopped at a donut stand,” she says. “Everybody loved it and we said, ‘Someday we’re going to open a donut shop.’ ”

Fast forward to the summer of 2016, when Lisa and Ron, who is a mechanical maintenance superintendent at Indian Point and the wrestling coach at Beacon High School, saw a “for rent” sign in the window at 315 Main. Lisa resigned as the athletics secretary at the high school — she’d been at the school for 17 years but longed to be more active — and the couple rolled up their sleeves.

“Donuts. Is there anything they can’t do?” ~ Homer Simpson

The couple refurbished the empty space on their own. Their oldest son and a friend set up social media to promote the shop. Their middle son provided the Hudson River panoramic photos that adorn the walls. Their youngest son made the tables from reclaimed wood, personalizing each on its underside.

“It’s definitely a community-based donut-making shop,” Tompkins said during a rare semi-slow spell. “We wanted it to feel like you were coming into my living room. You can come in, see some friends and hang out, and leave with a smile on your face.” 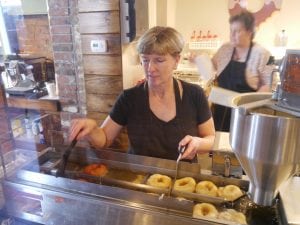 Co-owner Lisa Tompkins checks donuts as they float down the line. (Photo by J. Simms)

Two weeks in, the shop has been consistently busy. Everyone, it seems, wants a donut, or six, in the morning; the afternoon brings hungry students, and by the late afternoon, the going-home crowd. Weekends have been a free-for-all, with lines frequently stretching to the door.

“It’s been overwhelmingly incredible,” says Tompkins. “Never in my wildest dreams did I think we would have the response we’ve had.” But, she adds, while mixing batter, “there was no place to just stop in the afternoon or after school if people wanted something sweet.”

In 1916, Capt. Hanson Gregory claimed to have invented the holes in 1847, when he was 16 and working on a lime-trading ship. As the story goes, he was unhappy about the fried cakes being served because the outsides were crisp but the insides doughy. Using a tin pepper box, he cut a hole in the middle so the cakes would cook evenly. (See below.) Some credit his mother, Elizabeth Gregory, for the name: She deep fried dough with hazelnuts or walnuts in the center where it didn’t cook through; hence, dough-nuts.

An alternative hypothesis is that when donuts became popular, street vendors sold them on sticks or ropes, as they had been doing with bagels.

Glazed Over’s donuts, which cost $1.59 each, are handmade, made-to-order and served warm. For the uninitiated, each donut begins its journey — you can watch as each one floats down the mini-conveyor — as a freshly cooked cake donut before being customized with a glaze, topping and/or drizzle. Choices range from traditional fare such as chocolate, maple or lemon glazes, to add-ons like peanut-butter chips, white or dark chocolate, or, for the far out, Fruity Pebbles, Oreo crumbs, or mini-marshmallows. The menu includes eight glazes, 13 toppings and nine drizzles, for 936 possible combinations.

“It’s freshly made and it’s your donut,” Tompkins says. “It’s what your taste buds are telling you you want that day.”

Now in them days we used to cut the doughnuts into diamond shapes, and also into long strips, bent in half, and then twisted. I don’t think we called them doughnuts then — they was just “fried cakes” and “twisters.”

Well, sir, they used to fry all right around the edges, but when you had the edges done the insides was all raw dough. And the twisters used to sop up all the grease just where they bent, and they were tough on the digestion.

Well, I says to myself, “Why wouldn’t a space inside solve the difficulty?” I thought at first I’d take one of the strips and roll it around, then I got an inspiration, a great inspiration.

I took the cover off the ship’s tin pepper box, and — I cut into the middle of that doughnut the first hole ever seen by mortal eyes!

Well, sir, them doughnuts was the finest I ever tasted. No more indigestion — no more greasy sinkers — but just well-done, fried-through doughnuts.

Orders usually take 15 or 20 minutes to fill. A staff of friends and students — none of whom are paid in donuts (not fully, at least) — help behind the counter. 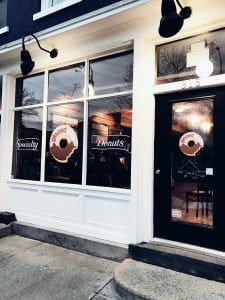 Glazed Over Donuts in Beacon (Photo by Raquel Ringgold / omnivogues.com)

By the summer, Glazed Over hopes to add donut sundaes (take a deep breath and read that again), and Lisa wants to get more creative with the toppings, taking the menu “to another level,” she says.