Christine Zouzias and her family have been enamored of the ancient isles of Greece since her first trip to the country in 1988. “Greece is our happy place,” she explains. Now she hopes to import a bit of its charm to the Highlands with her store, Meraki, which is scheduled to open in Cold Spring on Saturday, March 11. Along with Pink Olive and Flowercup Wine, it is part of a trio of new businesses on Main Street at the intersection with Fair Street.

Although commonly mistaken for Greek, Zouzias, who has lived in Cold Spring with her husband, Christos, and their three children (now all adults) since 2001, is Italian. Christos (who works in the maintenance department at Haldane) is half-Greek; his father was born there. Christine grew up on Staten Island and Christos in Yonkers — they met in his family restaurant in Scarsdale when she was in college and moved to Peekskill, visiting Cold Spring frequently. 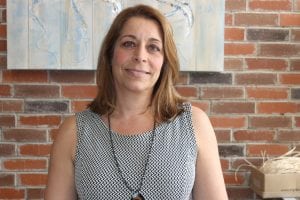 Christine Zouzias (Photo by A. Rooney)

They first visited Greece to connect with Christos’ family, returning numerous times with children in tow to the mountain village where Christos’ father grew up. They eventually bought an apartment in a suburb of Athens near the Mediterranean.

“It’s a culture we wanted to share with our kids,” Christine explains. “Family is so strong there. When we go to his father’s village, no one speaks English, and we get taken around to people’s houses — they bake the bread and invite us in to taste their olive oil, their cheeses.”

“When you’re in Greece, you feel so welcomed,” she adds. “People want you to meet their families, show you their neighborhood, their way of life. That’s a little bit of what we’d like to do here at Meraki.” 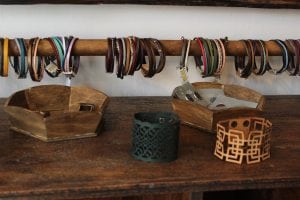 Leather bracelets and cuffs made by a Greek shoemaker from scraps (Photo by A. Rooney)

Meraki (roughly translated, it means to do something with all your heart and soul) has been freshly painted in the blues and whites associated with all things Hellenic, and a small kitchen area at the back has been renovated with Greek tiles, some containing talismans to ward off the evil eye. The stock includes olivewood platters, bowls, wine holders, salad servers and olive forks, all made from the trimmings of trees (no trees felled in the process). There are bracelets and necklaces made from leather shoemaker scraps (the sandals will be arriving soon). There are leather purses, belts, backpacks, along with linens, including table runners and pillows, ceramics, soaps, and artwork done by Athenian students.

An array of cookbooks focuses on what you’d expect — titles include Around The Greek Table and The Olive and the Caper. The Greek groceries include imported herbs and pastas, dolmades (grape leaves), cans of gigante beans and regional olive oils, including from the Zouzias family groves. 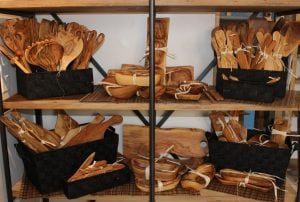 Zouzias says she was inspired to open Meraki while figuring out what she was going to do with herself after her youngest child left for college. (She left a long-time job at The Hastings Center in Garrison to start the business.) A week after the couple put down a deposit on the storefront, they made an impromptu trip to Greece for a buying and planning tour. Christine was not unprepared; she had already logged hours online researching handmade Greek products not available in the U.S. 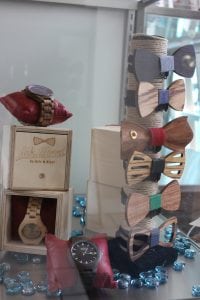 Watches and bowties made of wood (Photo by A. Rooney)

As so often seems to happen in Greece, the trip included many unplanned encounters. For example, while taking a ferry to the island of Aegina to visit a soap factory, the couple met an elderly shipping broker who insisted on visiting their third-floor walk-up, where he talked for hours about neighborhoods where they could find unusual crafts. While walking one of his routes, they came upon a shop where a young couple was making bowties and watches from wood.

After their return to Cold Spring, Zouzias spent the next few months waiting for her ship(s) to come in with her stock. She says she had to learn quickly about consolidated container shipping, customs brokers and import regulations.

4 thoughts on ““Greece is Our Happy Place””