Bruce Conklin, a native of Putnam Valley who was most recently the director of tourism for Lebanon, Missouri, has been appointed as executive director of the nonprofit Putnam County Visitors Bureau. He succeeds Libby Pataki, who resigned last year. Her former deputy, Frank Smith, has been acting director. 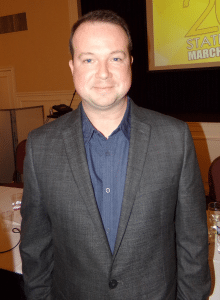 Conklin told members of the legislature’s Economic Development Committee on March 16 that he hopes to “integrate new and exciting things” into the bureau to make Putnam County a destination.

He said one of his immediate plans is to improve “front-facing media,” such as printed visitors’ guides, the website and social media. “My goal is to have every visitor to the county love and enjoy it here,” he said the next day during an interview.

Conklin’s hiring was announced by County Executive MaryEllen Odell at her State of the County address March 9. He will earn $65,000 annually. Smith earns $50,000 annually; Pataki earned $70,000 annually from the bureau and another $50,000 from a second tourism nonprofit she established.

In Lebanon, where he was director of tourism and marketing since 2015, Conklin’s duties included developing advertising strategies, conducting market research and promoting city and county programs, events and cultural resources. He also managed the department’s budget.

Before that job, Conklin spent nearly five years as a public works administrative assistant for the city.

Conklin, who was born in Peekskill but grew up in Putnam Valley and graduated from Walter Panas High School in Cortlandt Manor, earned an associate degree in business in 2001 from Westchester Community College and a bachelor’s degree in international business and human-resources training in 2003 from Johnson and Wales University in Rhode Island.

Conklin said that while the Midwest and the East Coast have their differences, upon returning to the region he was surprised to realize their many similarities. For example, he said, the popularity of the farm-to-table movement in the Hudson Valley was something he did not expect.

“I didn’t realize agri-tourism had become such a boom here,” he said.

Conklin said working with the tourism board, the county executive and the legislature to promote tourism and increase sales-tax revenue is similar to the advisory committee and city council he reported to in Missouri.

While the Putnam County Visitors’ Bureau has historically hosted community events such as Pumpkin Palooza or Easter egg hunts at Tilly Foster Farm, Conklin said he sees the bureau acting as more of a promotional mechanism to bring people in from outside the county, as opposed to hosting events for residents.

“It’s good to see a Putnam Valley native come back,” said Bill Gouldman (R-Putnam Valley) at the March 16 meeting. “We wish you luck.”