I would like to call attention to an unusually difficult, if not dangerous, intersection in Cold Spring, southbound at Route 9D and Chestnut Street, just past Drug World, which also spills over into the newly redesigned and rebuilt entrance/exit to the Butterfield property. It further involves the poorly maintained crosswalk nearby at 9D.

The signage at the entrance/exit does not allow left turns into or out of the property. However, there is only one No Left Turn sign for vehicles traveling southbound. (Several others were taken down when a vehicle went off the road onto the Chestnut Ridge property.) 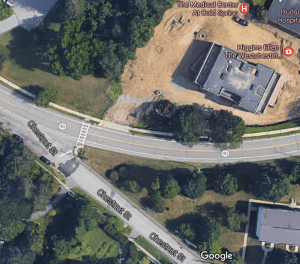 A Google satellite image of the entrance area before the driveway and entrance was added.

In addition to the insufficient and poorly placed signage, the problem involves the newly poured concrete along 9D at Butterfield. Hardly visible from the roadway are height differences intended to reinforce the restrictions against left turns. Higher clearance vehicles which have forcibly made left turns are cutting into this concrete. Low clearance vehicles and probably bicycles which may mistakenly or forcibly attempt left turns (unwisely!) here may be surprised and/or may not be able to make it over the height differences, potentially causing them to stop prematurely or forcing them to bounce backward into oncoming northbound traffic at the end of the widely known and, I thought, much-discussed blind curve.

Much of the difficulty here is undoubtedly due to ongoing increases in vehicular and pedestrian traffic in the area.

If and how this arrangement was approved is beyond me. It appears to fall under the purview of the state Department of Transportation (Touring the Senior Center, April 7), rather than the Cold Spring Planning Board. However, I would like to hear if the Planning Board has any of the DOT’s documents and if there was any attempt to review them.

I certainly hope this arrangement can be corrected before there is a serious accident, or that the situation is temporary. I see no easy fix.

One thought on “Letter: Troublesome Intersection”