When you have been in business as long as Robert Lomino was at the helm of Robert’s Total Care Salon in Cold Spring, you don’t think in terms of years. You think decades:

The ’60s: “Everyone had their hair in rollers — and their moms did perms on their hair — sometimes they burnt it.”

The ’70s: “It was all about Vidal Sassoon: geometric haircuts done with tiny scissors.”

The ’80s: “Perms; lots and lots of curls. Guys were getting perms, too; even I had permed hair, pretty long, too — that was the style. In my other salon (in Jefferson Valley, before it closed in 1984), we had a guys-only room so they wouldn’t get embarrassed.”

The ’90s: “Hair color. I thought that would be a 10-year deal, but it’s gone on expanding. Oh, and Friends was a big influence. Not a good one. Everyone wanted dead-straight hair and then you couldn’t do anything else with it, even with a curling iron.” 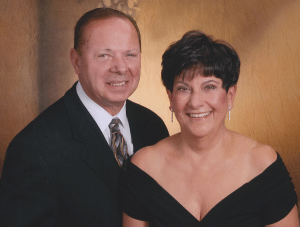 Lomino, who ran Robert’s with his wife, Mary, for more than 45 years, retired in February. The couple sold the business to Sal Viola of Soho Salon, which has three locations in Orange County. Mary Lomino, whom Robert calls the “backbone of the business,” worked behind the scenes and took care of marketing and promotions, including a Steel Magnolias 50th birthday party.

Hair salons are famous for gossip but Robert says what was said in the salon, stayed in the salon. “I instructed all my staff: people will tell you things; you don’t repeat anything,” he says. “I’m not sure why people confide but I think it’s because of the situation: I’ve never met you before but first thing, I’m touching your hair!”

Raised in Bay Ridge, Brooklyn, Robert Lomino enrolled in hairdressing school in 1959 and in 1960 joined a salon in Peekskill run by his future father-in-law. The two men later opened Josef’s Beauty Salon in Cold Spring, which in 1971 became Robert’s.

At capacity, Robert’s had seven or eight stylists. Often he would recruit new graduates from hairdressing school, which he called unusual because “most salons don’t teach — they try to get people from other salons.” Most of the hairdressers who were working at Robert’s at the time of the sale are still there, including Wendy Dugain, a veteran of 26 years. Her colleague Laura McInnes recently retired after 25 years.

When he decided to sell the business, Robert says he vetted five potential buyers, and “the last one was Sal Viola — and he had everything I wanted. Most of all we just had a connection, which was important to me.”

Two months into retirement, Lomino says he doesn’t have a plan, nor does he want one. Mary is doing church volunteer work near their Fishkill home, and she’s also involved with a women’s program through Mount St. Mary College. Robert has joined a program called LIFE: Life is Forever Enriching for over-55s, started taking a chess class and is doing carpentry projects around the house. “It’s whatever comes to be, comes to be,” he says.

Also on the horizon is time with the latest member of the Lomino family: Robert and Mary have nine grandchildren and, as of April 18, their first great-grandchild, Hayden Grace.

When Robert McCaffrey opened his Cold Spring real estate agency in 1975, he had no experience in selling homes, no one working for him and no internet steering potential clients his way. What he did have was his name.

“A lot of people knew me, knew my family,” he recalls. “And that brought the first clients in.”

That name (McCaffrey is the third generation of his family to live in Philipstown) is still on the business McCaffrey ran for 42 years until he sold it earlier this year to Bill Hussung, his office manager and a sales associate. There was never talk of a new sign.

“The name has great value,” says Hussung. “It has a huge recognition factor, particularly in the luxury market.” 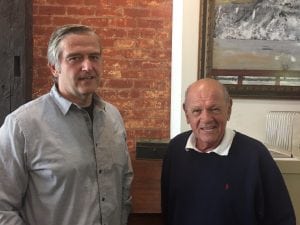 Bill Hussung and Bob McCaffrey (Photo by A. Rooney)

McCaffrey became a real estate agent while teaching business classes at Lakeland High School. Friends encouraged him to get his license, and he opened his first office in the space next door to its current location at 140 Main St. For a while he rented at 75 Main St. but soon bought the building at 143 Main now occupied by the Hudson Valley Shakespeare Festival (the two organizations swapped offices in early 2016).

The internet has been the most fundamental change in the business, McCaffrey says. “Someone from the city approached me about using it, and the calls started coming in right away,” he recalls. The downside, notes Hussung, is that “there’s a lot of incorrect information out there now,” such as sites that estimate home values.

Once focused on the immediate area, McCaffrey Realty now has listings all over the region. Its founder says buyers are no more demanding than in the past, “but they do know more.” The agency represents slightly more buyers than sellers, he says, but, says Hussung, “listings are the center of gravity because sellers attract buyers. We do both — different skill sets.”

Like any real estate agent, Hussung expresses optimism about the local market. “Village houses continue to be popular,” he says. “Not only can people walk to the train, but their kids can walk to the station and meet them.” He said demand is outpacing supply, with village inventory at an eight-year low. As prices rise, “at some point that will entice sellers and the supply will increase,” he says.

“We’re also seeing a lot more activity in the luxury market,” he adds, although the agency’s “bread and butter” are homes in the $400,000 to $500,000 range. “People are looking for turn-key, move-in ready. Our prototype is a young couple from Brooklyn or Queens, with one child. And it’s not money alone that’s driving people out of the city. People want a change of lifestyle. We’re also seeing fewer weekenders — more people want to live here year-round.”

Hussung himself is a city transplant; he and his wife moved from the Upper West Side, where he had a career in television news production. “We explored areas on both sides of the river and decided Cold Spring was too busy” after visiting Main Street on a beautiful afternoon, he recalls with a laugh. After a return visit, they realized “it wasn’t always that way. We fell in love with the landscape first, then the community.”

McCaffrey will remain as a salesperson (one of a dozen) at the agency that bears his name but also plans to travel, including to New York City. “I have lots of friends there, and I belong to all the museums,” he says. “I also love to go out to the Pocanos, to Boston, the Jersey shore.”

One thought on “Two Titans of Cold Spring Retire”