Planning board expected to approve plan

The nonprofit, located on 67 acres off Route 301, hopes to construct a building and improve parking and handicapped accessibility.

On April 24, the Philipstown Zoning Board of Appeals approved Stonecrop’s request for a variance so that a tower on the building can rise 7 feet above the limit set for ridgeline structures. The Planning Board has scheduled a public hearing for Thursday, May 18, on Stonecrop’s overall plan. 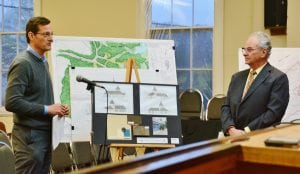 According to materials filed with the Planning Board, Stonecrop wants to replace a two-story, 2,500-square-foot structure destroyed by fire in 2016 with a 3,800-square-foot facility to accommodate more visitors. Called a bothy (Scots-English for “cottage”), it would serve as a welcome center to the gardens, with a gift shop and refreshment area as well as space for workshops and small gatherings.

Its design reflects the historic French-manor style of buildings on the Stonecrop property, said the project architect, Timothy Rasic of New York City-based Janko Rasic Architects. Glennon Watson, of Badey & Watson Surveying and Engineering of Cold Spring, presented the tower plan to the board. 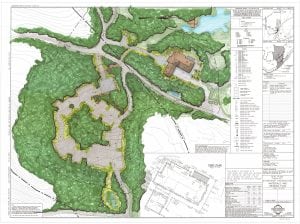 Watson told the Zoning Board that the parking configuration would respect the surroundings as much as possible. “We’ve tucked the parking between trees and taken advantage of little open areas, where we don’t have to cut as many trees,” he said.

In March, Planning Board members expressed concern that the three handicapped spots would be too far from the bothy. A revised plan presented on April 20 halves the distance. “It’s an invasion into the gardens, but we think it’s a reasonable compromise,” Watson said.

Anthony Merante, who chairs the board, recalled a trip to Stonecrop three years ago when his household included two individuals in wheelchairs. Finding accessibility limited, the group abandoned their visit, he said. “To me, it’s very important” to make Stonecrop open to all, he said.