When Reuben Simmons received his college diploma in 2007, the financial crisis was months away and jobs in criminal justice and sociology, the fields he’d studied, were soon to be scarce.

Opting to head home, Simmons returned to Beacon from Washington, D.C., where he attended the Catholic University of America, and found a summer job with the Highway Department that led to a full-time position. In 2009, he was elected Beacon president of the Civil Service Employees Association, the Dutchess County labor union. It was an opportunity, he felt, to improve relations between city workers and the community. Soon after, the floodgates opened and Brooklyn-to-Beacon became a thing. The city was filling with newcomers, and Simmons, his sister, Brooke, and a half-dozen friends felt the timing was perfect to get even more involved. 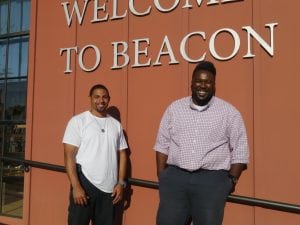 They began meeting weekly to brainstorm ideas about how to contribute to the community. The name We Are Beacon was suggested but dismissed as sounding too exclusive.

“We chose I Am Beacon because every individual has something to contribute to their community,” says Reuben Simmons, who this year was named highway superintendent following the retirement of longtime chief Anthony “Zep” Thomaselli. “What we’re losing in this country is discipline and self-accountability.”

Six years after its founding, Simmons still gets many of the same questions about I Am Beacon. Is it a club? Is it only for people who have always lived in Beacon?

“It’s for everyone,” he explains. “It’s about building people up. There’s enough people tearing each other down.”

In 2012, the group established a scholarship that is awarded each year to a community-minded Beacon High School senior. Called Making a Difference, it is funded largely by sales of “I Am Beacon” T-shirts and a 5K run each September.

The first recipient was Pamela Gadsden, who created Class in a Bag, a program for distributing backpacks to lower-income elementary school students that last year gave out 56 backpacks in the district.

“The students see [winning the scholarship] as a challenge,” says Frank Lofaro, a Beacon High School teacher who coached Simmons in football and is a member of the scholarship selection committee. “It gives them the responsibility of coming up with novel ways of serving the community. Not only will they get a monetary award, but they see it as a legacy.” 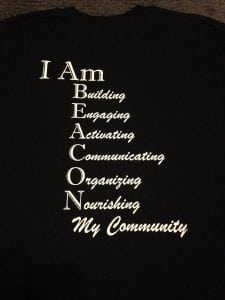 The back of the I Am Beacon T-shirt (photo by J. Simms)

When Beacon turned 100 in May 2013, I Am Beacon helped organize and promote a four-day event to celebrate the centennial. Simmons calls it a turning point for the nonprofit, which now sponsors the St. Patrick’s Day Parade of Green, throws an annual back-to-school block party, and hosts a Turkey on Every Table food drive in November.

The group’s latest project is a podcast, “This is Beacon,” that will share the stories of residents and business owners. Seven episodes have been recorded, and the show will debut in July.

“The goal is to create an oral history” of the community, explains Brandon Lillard, a founding member of I Am Beacon who serves on its seven-member board and co-hosts two other podcasts. “I’m looking for the good stories and the bad ones. We want to provide the city’s voice. I would love to talk to every person in Beacon.”

2 thoughts on “I Am Beacon”