After 63 shows and 33 years together, the grand couple of HVSF is back for another season

It never grows stale for Kurt Rhoads and Nance Williamson.

They’ve performed in productions together at least 63 times, by their own count, the majority at the Hudson Valley Shakespeare Festival (HVSF), where they unofficially reign as king and queen of the players. Back again this season (which is Rhoads’ 20th and Williamson’s 17th), the audience favorites appear in four productions between them and overlap in one. 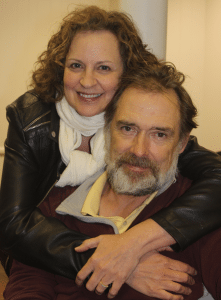 Nance Williamson and Kurt Rhoads (Photo by A. Rooney)

By now they’ve played many Shakespearean roles more than once but say each time reveals something new.

“Every time you go in and do it, you think you know it, but it’s a whole new lens,” says Rhoads. “It can be hard, at times, if you loved the first production of it you were in, but inevitably something starts to grow and you wind up seeing it in a whole new light; the writing holds you in a whole new way.”

Williamson says she associates plays she has done multiple times to periods in her life. “There are a lot of moving parts in terms of getting to know the role, deepening your interpretation,” she says. “It doesn’t get stale, it gets richer and there’s an increased ability to speak the speech more generously. It’s a gift to try it again; your point of view broadens along with your life experiences.” 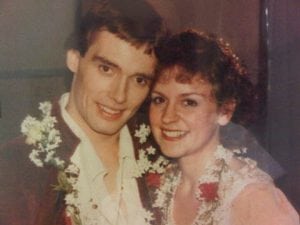 Naturally, the two met doing Shakespeare, As You Like It, a comedy in which the typical course of true love doesn’t run smoothly, until it kind of does. That was echoed by their first interaction, which took place at the Dallas Theater Center. Rhoads, who had just earned an MFA from the Goodman School of Drama in Chicago (his bachelor’s degree was in English, from the University of Chicago) was excited to become a member of a young classics company. Williamson — who grew up in rural Wisconsin as one of three daughters of a veterinarian, and is a theater graduate of St. Olaf’s College and Trinity University at the Dallas Theater Center (MFA) — was there already.

The reviews are in

Kurt Rhoads and Nance Williamson have been given the critical once-over many times during their careers, consistently favorably. Here are some enjoyable (and occasionally puzzling) excerpts:

“Since Nance Williamson is listed in the program as Miss Berger (the mistress) I’m not spoiling anything when I tell you that she does indeed make an appearance. It’s a brief scene but worth waiting for if only for her head-to-toe matador-red outfit but more importantly for its effect on Victor.” (An Empty Plate in the Cafe du Grand Boeuf)

“Williamson will have you arguing into the night. Was ‘this pair so famous’ ever in love, or was it lust of the most passionate, terminal kind?” (Anthony & Cleopatra)

“Williamson’s Amanda never disintegrates into a harpy; even at her shrill, nagging worst, her love and loyalty for her children are clear. She’s taller than the usual Amanda, but her graceful movements carry an air of Southern gentility.” (Glass Menagerie)

“To pretend not to overhear and report on what audience members were saying (‘Who is that nurse?’ ‘She’s usually the leading lady,’ ‘Unbelievable” would be irresponsible. Ms. Williamson rocks on — she wears headphones — carries on bawdily and hilariously, giving new truth to the old adage that no role in a real repertory company is less than a major role.” (Romeo and Juliet)

“And what of Dracula? Rhoads has the suave mannerisms and voice down pat — and his eyes are shadowy pits, smoldering with menace. When he takes Lucy to him at the end of Act 2, a blood-red moon shines down on the scene; Rhoads engulfs her with animal vitality, wrapping her in his cape — and no one laughs.” (Dracula)

“Kurt Rhoads portrays Lincoln with great dignity, humor and strength of character. He creates the Lincoln we honor and respect. More important, Rhoads also creates a Lincoln who is a flesh-and-blood character. He’s a man uncertain about his power, but confident in his views.” (The Rivalry)

“Dukedom becomes Rhoads, a royal Shakespearean actor whose performances, season after season, provide reason upon reason to take this festival seriously. His Friar is tenderly, rationally merciful.” (Measure for Measure)

“Rhoads portrays Iago not as a slimy, sneaking conniver, but as a rigid-spined authoritarian whose sense of the proper order of things is offended to the breaking point … Rhoads is absolutely chilling in the role, with an edge of mordant humor.” (Othello)

After the funding for the company was pulled on the day Rhoads arrived, the program head gave him a job teaching movement. The only problem was, Williamson already had the job. Like a true Shakespearean heroine, she was miffed. Nevertheless, six months later, after playing opposite each other in a school-tour production of As You Like It, the pair was wed. Seven years later, they again performed in As You Like It, and they’ve done the play together three more times, including last summer at HVSF. “It’s our love play,” Williamson says.

The pair spent the ensuing decade working frequently for the Dallas Theater Center and Shakespeare Festival of Dallas, which performed in an open-air band shell not dissimilar to the HVSF tent at Boscobel. There were also similarities in the style of DTC director Adrian Hall and the presentations by HVSF. “Hall liked to do the works using clothing, not costumes,” says Williamson. “Storytelling was the goal.” Hall also pushed to develop regional theater, which he called “art where we are.” 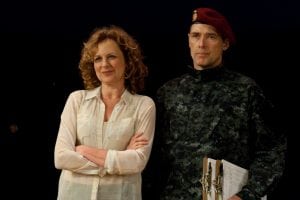 After a decade in Dallas, the couple in 1992 moved to New York City, where they acquired agents and found steady employment. During most years they mix lead roles in regional productions with commercials, TV work and the occasional Broadway outing. (Williamson’s most recent was in Romeo and Juliet with Orlando Bloom, while Rhoads appeared in Julius Caesar starring Denzel Washington.)

“Our plan was never to stay in New York City but rather hunt around for another company where we could hang our hats,” Williamson recalls. “We didn’t realize that most companies had been done away with by that point,” and did not know “that in a way the [entire] country would become our ‘company.’” 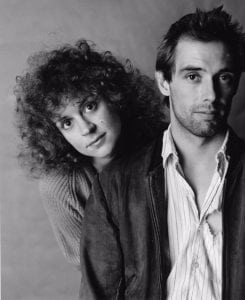 Their theatrical agent attempts to find work for them together but, if he can’t, they have a “six-week” rule. If separated for that long, one hops on a plane.

They’re great fans of each other as actors. “Kurt has a kind of bravery that’s pretty bold, in different ways,” Williamson says. “It can be funny or dangerous. There are these moments: In Othello, as Iago he rubbed Desdemona’s back, kept his hand on her — the guy that’s supposed to help you recover oversteps his boundaries, with his wife in the room. It’s not in the script, but so bold. Kurt lifts things off the page that aren’t there. Makes them really unique. He brings his vivid imagination to the text.” 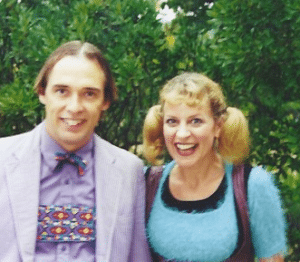 As Aguecheek and Maria in “Twelfth Night”

Rhoads assesses his wife: “Nance has a warmth of presence; she puts the audience at ease and makes them comfortable. Nance lets people in, in a good way. And, if she makes a mistake, she forgives herself and the audience goes with it. In An Iliad one night I messed up about seven times and ugh — I kept thinking about it —she rides with it.”

Despite the amount of Shakespeare they have performed, they have not acted in all of his plays. Rhoads prepared to do Timon of Athens but the production was cancelled. “When you taste a part, it’s hard to let go of it,” he says. They both have gaps in some of the history plays.

After spending summers in Garrison, Rhoads and Williamson decided, in 2002, to move here. “I wanted to have a place where I could read outside,” says Rhoads. “There’s a kind of desperation that actors start to feel, living in the city. Your work becomes your only measure. I’m from a small town in Illinois, about 5,000 people; my parents ran a Sears Catalogue store. I like the kind of balance of living in a manageable community with a connection to nature.” 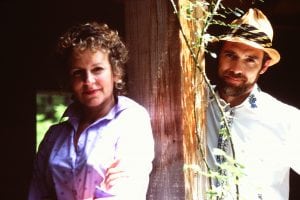 From HVSF’s “The Taming of the Shrew’

Williamson agrees. “There was a constant nervousness about paying rent, whereas now instead I can focus on having a garden to take care of,” she says. “Moving up here has been a gift, largely because we’ve gotten to know so many people, meeting them in the grocery store, saying hi, having conversations. For actors to have a home base is healthy.”

Both say they will be more than content to continue taking the stage in Shakespeare. “In Shakespeare you say what you mean; you’re speaking the truth,” says Williamson. “With many other playwrights, like O’Neill, what characters say is more ambiguous. But all of them benefit from revisiting: they need ripening, need to be in the barrel in the basement.”

They volley this idea between them.

Rhoads: “You can let some of the preciousness go, have a lighter touch, not hit it so hard.”

Williamson: “It’s like you’re playing jazz. You know it so well you can let it breathe.”

One thought on “Kurt and Nance”