The Fishkill Historical Society and all Hudson Valley historical societies need to take a stand for preservation of endangered acres of the American Revolution Fishkill Supply Depot. These acres are currently under review by the Town of Fishkill for a sprawling commercial development project known as Continental Commons.

What indeed is the purpose of a historical society if it does not fight with all its might for heritage, history and preservation? To be silent is to be complicit in the destruction of sacred land and cultural resources. (Same goes for Dutchess Tourism, as their endorsement of destruction of this cultural heritage site remains deeply troubling.) 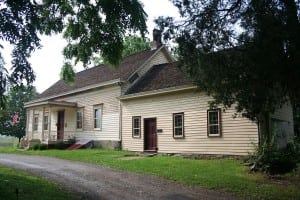 The project area and site of the Van Wyck Homestead lie within the Hudson Highlands ecosystem. The deeply forested, 10-acre project site for Continental Commons will be completely clear-cut if approvals move forward.

Think about the consequences. No forest buffer will exist to enhance the views of the Van Wyck Homestead, headquarters for the Fishkill Historical Society. It will be a stark and uninviting viewshed, with 1-84 to the north and parking lots, sprawling retail space and a hotel to the south, no shade, and no mature trees. In addition to tragic destruction of a cultural heritage site, construction will further destroy cultural resources, native species and the biodiversity that exists there.

It remains tragic that Fishkill can’t seem to turn a corner here. Bear in mind that the Dutchess Mall, also on sacred lands belonging to the Fishkill Supply Depot, was bankrupt after five years.