Say you had $10 million to make improvements to a small town. What would you choose, and why? How would you make it happen?

That is the challenge presented by the Downtown Revitalization Initiative (DRI), a state program in its second year. Municipalities are invited to submit proposals; from the more than 100 received this year, a committee chaired by Secretary of State Rossana Rosado chose 10 and presented each with $10 million. 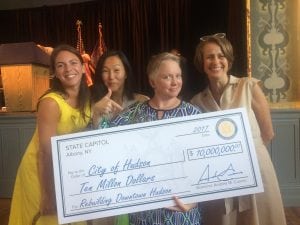 The city of Hudson was one of the 10, thanks in large measure to two Cold Spring planners it hired to craft the 48-page proposal. Juhee Lee-Hartford of River Architects led a team that did the design work, and Kathleen Foley wrote the grant. Both said that not being residents of Hudson but living in a similar river town helped them understand the challenges.

Launched in 2016, the state’s Downtown Revitalization Initiative is a collaboration with 10 Regional Economic Development Councils to identify downtowns that could be jump-started with a relatively small investment.

$10 Million for Cold Spring or Beacon?

How about Cold Spring or Beacon? Could either also get a DRI “downtown identification” grant? Among the requirements in a four-page list of criteria:

should be compact, with well-defined boundaries.
must be a livable community for diverse populations, including in income and age.
have recent or pending job growth in or near the area.

be able to capitalize on private or public investment in properties, including affordable housing.
have business improvement districts or partnerships with nonprofits.
have investments in arts and cultural institutions.
have the ability to implement policies that increase livability and quality of life through zoning and parking, energy efficiency and management structure.

Three years ago, Lee-Hartford and her husband and partner at River Architects, James Hartford, learned that Hudson officials had asked for bids for a study of how to adapt a mothballed 19th-century lumber warehouse.

The couple formed a team to respond, which included Foley’s firm, Mirador, which specializes in preservation planning. Another firm got the job, but one of the evaluators, Sheena Salvino of the Hudson Development Corp. (HDC), contacted River Architects and Mirador when the DRI put out its call for downtown proposals. HDC and the Economic Development Corp. of Columbia County funded the grant writing. 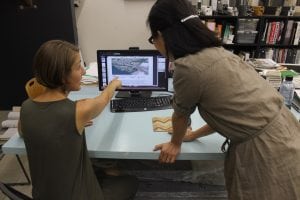 Kathleen Foley and Juhee Lee-Hartford explaining a visual included in their Downtown Revitalization Initiative proposal. (Photo by A. Rooney)

“We thought we’d be more-or-less just updating the [warehouse] grant application,” Lee-Hartford explained, which prompted a laugh from Foley.

What ensued was a round-the-clock, months-long endeavor, which included site visits, council meetings and research. “It was exhausting but super fun,” says Foley. “Working with Juhee, even if we’re working frantically side-by-side, we have a mind meld and my theoretical matches with her visual.”

One challenge was keeping their ideas with “municipal reality,” which meant poring over the city code. They also held public meetings to get feedback from the community.

Of the $10 million grant, the first $300,000 will fund a planning process to decide how the balance will be used. “One idea may go forward while another is quashed,” Foley explains. “Each component represents promise, hurdles and potential solutions for jumping those hurdles. 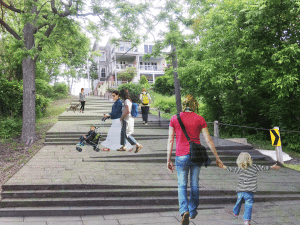 Switchback stairs would provide access to the waterfront (Image provided)

“Take waterfront development. As with many Hudson River towns, it’s a natural lure to offer amenities enticing people and the businesses which serve them. In Hudson’s case this is thwarted by a barrier: impassible train tracks separate that area from the rest of the city.”

To counter that, Lee-Hartford and Foley proposed a multi-use bridge that will separate bus and bicycle traffic, along with switchback stairs and a pedestrian bridge. They also suggested an expanded riverfront park, environmental center, boat club, skate park and accommodations for overnighting kayakers in what is now a disused fishing village.