A chance to avoid prison — and stay alive

It takes a single visit to Putnam County’s weekly drug court in Carmel to realize how serious the stakes are for everyone involved.

Defendants arrive in the waiting room of the court, known officially as Judicial Diversion/DWI Treatment Court, well ahead of time. Judge James Reitz does not tolerate late arrivals. Many of the defendants know each other.

“When doesn’t he lecture us?”

A woman complains that her son is in the county jail because he tested positive after taking painkillers following oral surgery. “It’s stupid,” she says. “You can’t do anything” while in the program.

“Your lawyer has to deal with something like that,” someone else advises. “They have to know ahead of time — not after.”

In another conversation nearby, someone says: “When we do drugs, we don’t think about dying. We just think about getting high.”

After the 30 or so defendants file into the courtroom, Reitz asks anyone to stand who knows a woman named Samantha who had appeared in court the previous week.

A few stand. “She was doing well,” Reitz says. “She told me, ‘How can life not be great? I’m clean and sober and working. I’m getting my degree. I’m doing great.’ ” Her most recent court-ordered drug test, three days earlier, had come up negative.

That same afternoon, she was found dead of an overdose.

“Twenty-seven-years old,” says Reitz. “And just a few days ago everything was ‘great.’ ”

As he does at each session, Reitz admonishes everyone present. “You have to make good decisions,” he says. “You can never let your guard down. If you stay alive, we can help you.” 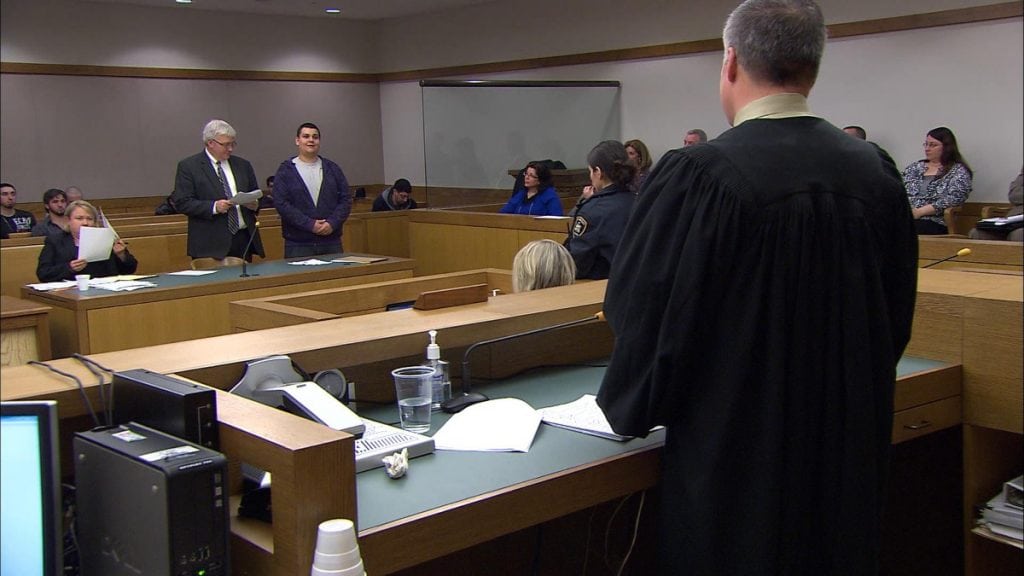 Judge James Reitz, with his back to camera, speaks during a Drug Treatment Court session in 2014. (NBC News)

The first drug court in the U.S. was created in Miami-Dade County in 1989 in response to the crack cocaine epidemic.

The premise is simple. Defendants arrested for certain non-violent felonies who suffer from drug or alcohol addiction can agree to enter a court-supervised treatment program that lasts a minimum of two years. Eligible crimes include selling drugs, theft, larceny and burglary; addicts often steal to fund their habit. If the defendant completes the program, the charges are dismissed or greatly reduced and the person avoids prison time.

Today there are more than 3,000 such courts in the U.S., including in Putnam and Dutchess counties and Beacon. Most handle only adults, but some specialize in juveniles, veterans and other groups.

In Carmel, a team reviews each case to determine if the person qualifies. It includes Reitz and two other court officials, lawyers from the district attorney’s office and Legal Aid, two citizens, a probation officer, someone from the Sheriff’s Office and counselors from the county department of mental health and a local treatment center.

At the typical court session, a defendant usually speaks to the judge for only a few minutes. During the appearance, each person submits a written update addressed to his or her probation officer or counselor. Some stand with an attorney. All must attend the session from start to finish.

Unlike the case in the waiting room, all are on their best behavior in court.

Reitz: How are you doing?
Man in his 30s: I’m doing the right thing. I’m clean and sober.
Reitz: So you’re doing all right. Can we help you with anything?
Man: You already have.
Reitz: Never let your guard down.
Man: I won’t.
Reitz: Any questions?
Man: No, sir.
Reitz: You’re doing good work. Keep it up.

Reitz: How are you doing?
Woman in her 20s: Really well.
Reitz: Why so?
Woman: I’m sober.
Reitz: I understand transportation here was an issue?
Woman: I made an effort, I really wanted to be here.
Reitz: Be sure to thank the driver who brought you.
Reitz, to coordinator: She’s good, right?
Coordinator: Yes, she’s doing well.
Reitz: You’ve earned your nine-month coin.

Reitz routinely awards coins and certificates for milestones. He presents the coin. Everyone applauds.

Reitz: How are you doing?
Man about 30: Very well.
Reitz: Any questions?
Man: No, I want to thank you for letting me travel to my brother’s wedding. It meant a lot. I even made a speech.
Reitz: When you make good decisions, you earn more trust.
Man: Everything is under control.
Reitz: You’ve made some good decisions.

Man in his 50s: Yes, I’m happy. It’s a big turnaround. It’s a great opportunity.
Reitz: I’d rather give out coins than send you to prison or read about your death. You’re an inspiration. Keep it up. One day at a time.

The encounter does not go as well for the next defendant, a 40-year-old man. He failed a drug test after taking amphetamines. He stands with his Legal Aid lawyer.

Reitz asks for an explanation. The man says that he drank a dietary supplement that was being given out at a fitness club.

“That’s it?” Reitz says. “You expect me to believe this nonsense? You’ve been in this program how long? And you took something without knowing its contents? Nonsense. We will have to deal with this.” 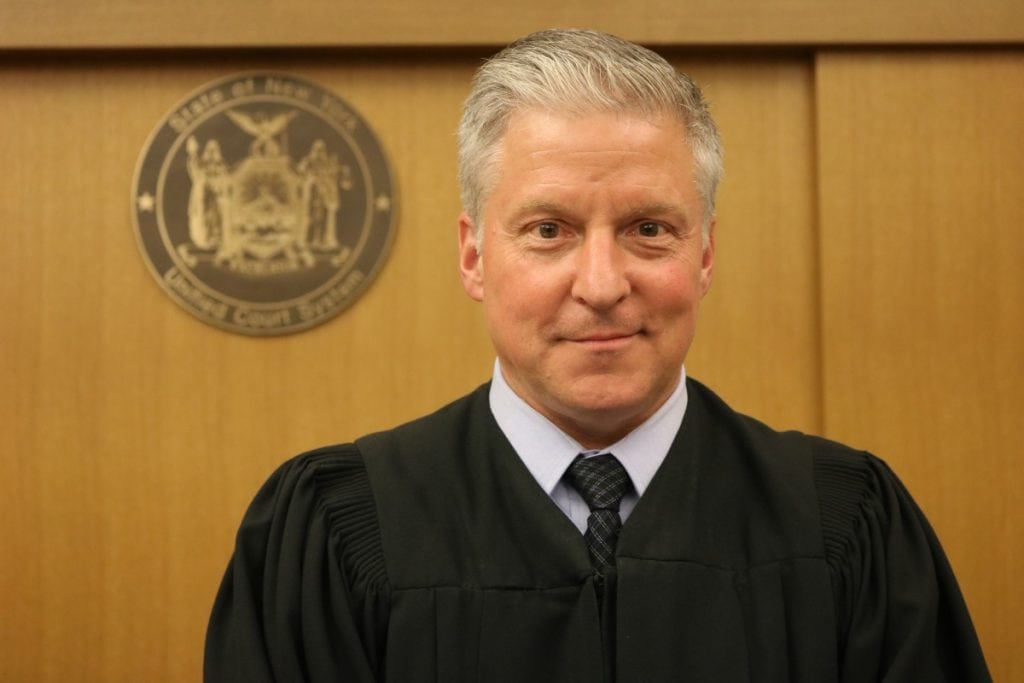 Among the good decisions that Reitz expects from defendants is adherence to the court’s strict requirements. Participants must receive clinical treatment; attend support meetings; submit to drug tests; meet with a probation officer or counselor; and stay in contact with the court. Repeated violations mean dismissal from the program and the restoration of all pending criminal charges.

The program has three phases. As a defendant moves through each, he or she earns rewards. For instance, mandatory court appearances are reduced from weekly to alternate sessions to monthly, and drug testing becomes less frequent.

A defendant who qualifies for drug treatment court must observe two sessions before being considered. At one session, Reitz notices a late arrival.

Reitz: Sir, can I ask why you are here?
Young man: I’m here to observe.
Reitz: You want to be in this program?
Man: Yes.
Reitz: When does court start?
Man: At 2:30.
Reitz: And what time is it now?
Man: It’s 3.
Reitz: Then get out! Get rid of the gum. Dress appropriately. And get out!

After the man departs, Reitz addresses the others. “You have to be respectful,” he says. “Showing up right on time is not being on time. Be there 15 minutes early. Show respect.”

Partway through a court session, guards bring a young prisoner in through a side door from the Putnam County Jail. She is shackled at the wrists and ankles. The room falls silent, in part because all defendants usually arrive in street clothes, sometimes coming from work. The woman stares ahead, head slightly bowed.

Reitz is familiar with the defendant. He asks the assistant district attorney for an update on the case. Charged with, among other crimes, selling heroin, the woman has struggled, with 10 violations of the treatment court rules.

More from the Judge

Click here to read a Q&A with Judge Reitz about his views on the epidemic.

“What do the People recommend?” Reitz asks.

“We recommend that she be removed from the program,” the assistant D.A. says, “and sentenced to 27 years in state prison.”

The woman stands silently with her lawyer as Reitz asks her a series of questions to determine if she is aware of the seriousness of her situation. She replies to each with an almost inaudible “Yes.”

“Do the math. How old will you be when you get out of prison?” Reitz says.

The judge says she missed out on a second chance and criticizes her attitude. The message is clearly intended for the other defendants.

At the woman’s sentencing on Sept. 28, Reitz said the court team was divided on whether he should send her to prison. Reluctantly, he said, he would defer sentencing. She had one more chance.

In 2014, Judge Reitz allowed NBC News to bring cameras into the Drug Treatment Court to record the proceedings.