I would be remiss in not commenting on, and not commending, The Current for your four-part series, Fighting Back: The Opioid Crisis (Sept. 22 to Oct. 13).

Reports on this crisis are too often recycled news, superficial discussions and short soundbites. I like to think I know a lot about the opioid crisis, and I suppose I know more than many; however, I can say that these four lengthy reports were informative, educational, in-depth, well-written and riveting. Your writers provided interesting statistics; vital information about the difficulties of sobriety and treatment; viewpoints of many “players” in the business — from users, to providers, to parents, to doctors, to judges and attorneys, and to members of religious orders; and a message of hope and understanding.

The final installment, appropriately titled “The Way Out: ‘Where There is Life There is Hope’ ” (borrowing a quote from Susan Salamone of Drug Crisis in Our Backyard) accomplished something very important: it informed the public that this is not a crisis of despair and dissolution. It can be one of hope and solution. This message must be preached over and over again. It is never hopeless; it is never too late; it is never over. 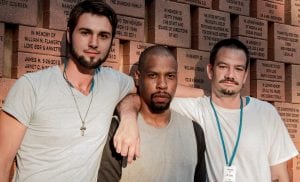 Three patients at St. Christopher’s Inn treatment center in Garrison — Anthony, Tristian and Steven — stand in front of an honor wall at the facility. (Photo by Anita Peltonen)

I was moved by the photo on Page 1 on Oct. 13 of the three young men, patients at St. Christopher’s Inn, standing in front of the honor wall. I don’t know them, but I wish them all the success and blessings that a healthy, non-addicted life can bring. They looked so hopeful, healthy, full of promise, and — well, young.

With addicts and alcoholics, sometimes we are tempted to say “How does a person become such a mess?” It is an important question. But we also need to understand something else: “There but for the grace of God go I.” If we don’t understand this by now, we haven’t learned a thing.