Millions of Americans don’t realize they are afflicted

Frank Milkovich, 84, of Cold Spring, was in his 50s when he was diagnosed with Type 2 diabetes. As part of an initiative by Lions Club International, he is distributing bookmarks to educate people about the disease.

Type 2 diabetes afflicts about 29 million people in the U.S. and is the sixth-leading cause of death among American adults. It typically is not diagnosed in people younger than 40 and is more likely to strike those who are overweight and don’t exercise. Warning signs include increased thirst, fatigue, blurry vision, high blood pressure, sleep difficulties and sores that heal slowly. If a close family member has the disease, it increases the risk.

The aim of the Lions Club campaign is to encourage people to be tested, because often the symptoms of Type 2 diabetes are attributed to the stresses of daily life. 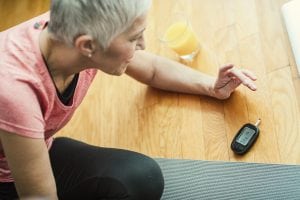 A woman with Type 2 diabetes checks her blood sugar levels after exercising.

“It’s important to become aware, because diabetes can affect so many things: circulation, nerves, kidneys, the cardio-vascular system and vision,” says Milkovich, a former Haldane principal who has been a Lion for nearly 50 years. “Sometimes people wind up with amputations, particularly of toes and feet, when not treated in time.”

(Another group — members of the Haldane varsity boys’ basketball team and their parents — are attempting to educate people about Type 1, or juvenile diabetes, with affects about 1.25 million people in the U.S. The team will host a fundraiser during its home game on Friday, Jan. 19, for research into the disease.)

Diabetes involves insulin, a hormone that moves through the blood allowing sugar to be transported to cells for energy. Without insulin, the sugar remains in the blood, and the measure of blood glucose (the number of milligrams of glucose are in each deciliter of blood) climbs until there’s a loss of consciousness.

Type 1 diabetes is an autoimmune disease: the body targets insulin-producing beta cells in the pancreas until the organ can no longer produce any. People who have this type of diabetes inject themselves or use a pump to compensate.

In Type 2 diabetes, the immune system doesn’t attack beta cells. Instead, it loses its ability to respond to insulin. The body reacts by producing more insulin, and the stress this places on the beta cells can destroy them. The insulin resistance leads to elevated levels of sugar in the blood, usually at a slower rate than Type 1, which means it can go undetected for years. Millions of Americans have Type 2 diabetes but have not been diagnosed, Milkovich notes.

People with Type 2 have to watch what they eat because carbs move quickly into the blood and sugar spikes can overwhelm the body’s ability to manage its blood sugar levels. In some cases, the disease can be countered by losing weight and exercising. “That’s why diagnosis and diet is so important,” says Milkovich. “In my case, exercise was at the top of the list, and now I’m going strong.”