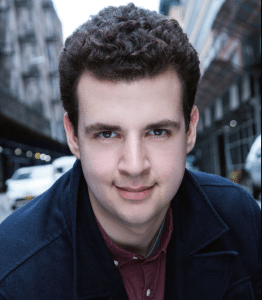 Many young actors wait tables. You’re an usher. How did that come about?
I saw the production of Spring Awakening at the Brooks Atkinson Theater and introduced myself to the house manager. I followed up and got lucky with the timing and was hired as a substitute. It’s a great job because the hours are theater hours, and auditions tend to be early in the morning.

You went from usher to performer during Waitress. How did you manage that?

About once a month they do “Cast Album Karaoke.” Ticket-holders sign up before the show or at intermission to sing a song from the show. Every time I worked a karaoke performance I would sign up. I signed up with another usher, Sarah Daigle, and our names were called.

So it was your Broadway debut. How did it feel?

My legs were shaking. I’ve been onstage, but this was different. We sang It Only Takes a Taste. The audience was so excited that two ushers were going to sing. I think we sang it with a lot of emotional goodness. Even though I’ve seen the show about 45 times, I didn’t know the ending harmony. I thought I had too much vibrato. I flubbed some lyrics and had to look at the book twice. But the audience gave us a standing ovation.

As soon as we finished, we had to rush back to where we stand at the end of the shows. People were complimenting us and we were saying, “Thank you so much. Exit straight ahead.”

So, what’s next?
My goal is to become a starving theater artist, so I’m heading back to college to train. Broadway is the dream but regional theater is the goal.