The Haldane and Putnam Valley school districts conceded this week that they played their two boys’ varsity basketball games this season at a neutral site — Brewster High School — because of an incident last season involving Putnam Valley players who were visiting Haldane for a joint practice.

Athletic directors at the schools said on Jan. 26 that the change of venue was due to past conflicts, but did not provide specifics. The superintendents of both districts released letters this week providing more details.

After conflicts between fans last season, including a fistfight after the game at Putnam Valley, administrators arranged a peacemaking dinner and practice with the boys’ varsity teams from both schools that took place at Haldane. During the practice, the superintendents said, the Putnam Valley players dressed in the girls’ locker room, which is standard practice for visiting teams.

According to the superintendents, the boys found a phone in the locker room, which other sources say belonged to a female junior varsity player. It did not have a password, and two boys used it to take a “selfie” of their faces while a third player snapped a photo of his genitals that he sent to the phone’s contact list, which included many of the players on the girls’ junior varsity team. 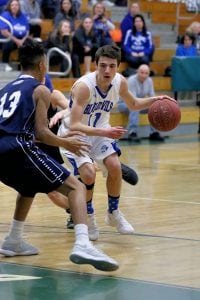 Nick DiPalo (11) drives against Putnam Valley on Feb. 3. Only limited spectators were allowed into the game. (Photo by Richard Kuperberg Sr.)

According to the accounts provided by the superintendents, all three boys were removed from the team and suspended from school. In addition, Haldane sent the three boys notice that if they returned to the Haldane campus, they would be charged with trespassing.

Before the 2017-18 season, Putnam Valley asked if the two boys who had taken the selfie could play in the game at Haldane, arguing they were less culpable than the third boy who had taken the lewd image, according to Haldane Superintendent Diana Bowers. (Putnam Valley Superintendent Fran Wills wrote that the school viewed the situation as two separate incidents.) Haldane declined to lift the trespassing order but agreed to play the boys’ games at Brewster.

As part of the agreement, no students were allowed to attend either game and the junior varsity games were canceled. The schools also agreed that the two Putnam Valley players would not attend either of the girls’ games as spectators.

In addition, on Feb. 5 Haldane barred students from the girls’ varsity game at Haldane against Putnam Valley and abruptly canceled the junior varsity girls’ game scheduled for that same day. Police officers were present at the Feb. 5 girls’ game, as well as those played at Brewster.

Putnam Valley is in Class B, based on its student population, while Haldane is Class D, but the two schools have a long and competitive athletic rivalry. In one sport, wrestling, two Haldane students compete with the Putnam Valley team, and the track and football teams have practiced together. 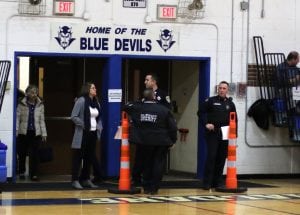 Sheriff’s deputies positioned near the gym entrance during the Haldane versus Putnam Valley girls’ game on Feb. 5. (Photo by Scott Warren)

On Feb. 5, Bowers, saying she was writing in anticipation of further reporting on the matter, told parents and community members that the agreement had been made due to “problematic behaviors that infiltrated our sporting events.”

(Haldane and Putnam Valley are not the only match-ups in which spectators, including parents, have displayed poor behavior. A parent from Westlake was thrown out by referees during the Haldane girls’ home victory on Feb. 2.)

“Over the past few years, there have been circumstances where spectators at the games did not show the appropriate level of sportsmanship and inflamed tempers that shifted positive events to negative ones,” Bowers wrote.

She said she and the high school principal at the time (Peter Carlucci) met with administrators from Putnam Valley and decided to “invite the teams to practice together [at Haldane] and share a meal as a way to build friendships and promote a positive relationship.”

In her own letter to parents, Wills said the bad blood began in February 2016, when “an incident occurred on the Putnam Valley campus following a boys’ basketball game with Haldane which resulted in the significant injury of one of our students by a fan of the opposing school.” According to witnesses, the student was punched and required hospitalization.

Wills said that the player who took the lewd photo “received swift consequences by the school to the extent allowable and immediate removal from the basketball team.” The second two students “received school consequences in addition to a team consequence.” 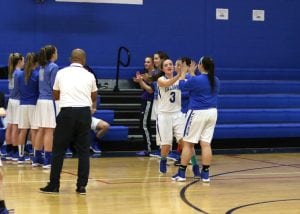 The student section was empty during the Feb. 5 girls’ game at Haldane versus Putnam Valley. (Photo by Scott Warren)

In a comment posted below, Michael Monteleone, the father of two Haldane girls’ basketball players who said he attended multiple meetings with administrators, coaches and a Putnam County sheriff’s deputy about the incident, expressed disappointment with the responses of both administrators. He argued that the reason the games were moved was simple: To allow the two boys still on the team to play in the “away” game.

“The three players from Putnam Valley made a bad choice,” he wrote. “One crossed a serious line. Punishment was given — not enough in my judgment, but I was OK with it. What I don’t agree with is the decision by Putnam Valley administrators to make a basketball game more important than sexual misconduct against 11 girls who ranged in age from 13 to 16.”

He added: “After the incident, Putnam Valley played at Haldane [during the 2016-17 season] without the three boys, and there were no incidents. In fact, the schools compete in many sports with no issues. So why move the two games this year?”

Bowers said she was writing her Feb. 5 letter “because a local reporter is about to share intimate details about the situation” that were “provided by an individual not affiliated with our district.”

The reporter, Rich Thomaselli, who writes the online Hudson Valley Sports Report and contributes sports coverage to the Putnam County News & Recorder, reported on the change of venue in the paper’s Feb. 7 issue. The previous week, he had written a column for the PCNR blasting administrators at both schools for being “two-faced” and “disingenuous” for not saying more about what happened.

In her letter, Wills said that “the public might not be fully informed” about the move “due to the responsibility of school districts to maintain confidentiality about discipline and student issues.

“We know that as educators we are responsible to help students learn from mistakes, even egregious ones,” she wrote. “Adolescence is a time when we use every opportunity to turn errors into learning opportunities when students learn about consequences, remorse, forgiveness and making amends. We are seeking the most balanced approach, holding students accountable, but allowing them to move forward without permanent exclusion from positive community experiences.”