After a public hearing on a draft law that requires guns at home to be locked up when their owners aren’t present, the Philipstown Town Board on Wednesday (Feb. 21) postponed a vote on the measure.

Supervisor Richard Shea said the board had “heard a lot of public comments” and wanted time to consider them. 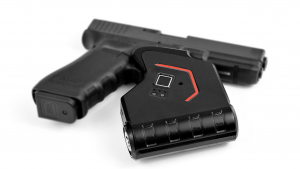 The hearing filled nearly every chair in the Haldane school auditorium in Cold Spring. Before it got underway, the board held a moment of silence for the victims of the Parkland, Florida, school shooting on Feb. 14 in which 17 students and teachers died.

Most residents who spoke favored the safe-storage initiative, which demands that no firearm owner leave a gun “out of his or her possession or control in a residence” while knowing, or having reason to know, that anyone under age 18 is at home, unless the owner is also present or gives the gun “to a lawful custodian,” locks it in a container, or disables it with a lock. Penalties for violating the law, a misdemeanor, would include a fine of up to $1,000, a year’s imprisonment in the county jail, or both.

Putnam County Sheriff Robert Langley, a Philipstown resident, led the long list of attendees addressing the issue. Unlike the speakers who followed, Langley did not take sides, saying his job was “public safety … As sheriff, it is my expectation that Putnam County residents will acquire firearms lawfully. I expect that they will educate themselves and others about gun safety. And I expect that they will handle their guns responsibly, always with the safety of others foremost in their minds.”

Kathleen Zebzda accused the board of overstepping its bounds, citing a 5-4 ruling by the U.S. Supreme Court in 2008 that struck down a Washington, D.C., law that required trigger locks on rifles and shotguns.

Activists pushing for stricter gun control following the Parkland shooting staged a candlelight vigil at the historic courthouse in Carmel on Feb. 19 with signs such as the one below, created by a volunteer for Indivisible Yorktown. The vigil was interrupted several times by counterprotestors. 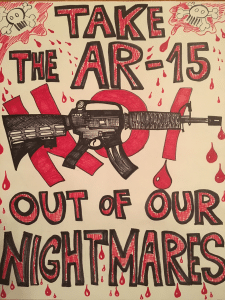 “Your mandate is to do things for residents of the town we are not able to do ourselves,” such as road maintenance and recreation programs, and “to ensure the liberties of every person are protected,” she said. “Protecting myself in my home is my responsibility and right. It must not be infringed by any government or law.” She urged the board “not to pass this illegal and unconstitutional law.”

“Rendering us defenseless is not” a Town Board function, Kenn Sapeta concurred.

However, Stephen Gaba, the town’s attorney, said the law at issue in the Supreme Court decision differed significantly from the proposed Philipstown regulation, which would only apply “when you are not home. Under this law, we do not prevent people from accessing their guns.”

Some critics said the Town Board should focus not on guns but drug abuse. “We don’t have a firearms problem in this town, we have an opioid epidemic,” Rodney Dow asserted.

Town Board Member Nancy Montgomery responded that the board is addressing opioid abuse, as are other local organizations.

Claudio Marzollo described the pleas for attention to the opioid problem as “a red herring.” Concern about opioids “does not mean we cannot tackle other problems. Let’s not wait until the first kid in Philipstown gets shot.”

Sapeta faulted the Town Board for not implementing a suggestion made by gun owners in 2016, when the board first proposed the ordinance, to establish gun-safety courses in Philipstown schools and at the Recreation Department. “The board did not seize upon this opportunity” he said. “It’s upon you to contact us.” 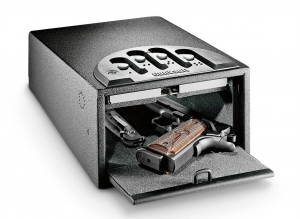 Montgomery explained that such programs start with residents and recommended those interested present a proposal to the town’s Recreation Commission, as other citizens have done in getting courses offered. “We went over this with you guys” in 2016, she recalled.

“There’s no reason to be opposed to a safe-storage law,” said one, Haldane senior Mae McGrath, a non-voting advisor to the Haldane School Board. “It no way infringes on an individual’s right to bear arms and doesn’t prevent being able to use a gun for defense. There are too many deaths in this country as a result of gun violence and this law could be a step in the direction of decreasing this number.”

Karen Kapoor, a preschool teacher, said she lives in fear of having to protect her students from a gunman. “I don’t want to have to do that,” she said.

Ana Silverlink described a family tragedy when her brother, a lifetime National Rifle Association member, shot himself in front of his wife. “Guns do not save lives. Guns are made to kill,” she said. “Laws save lives.”

Lt. Mike Cappello of the New York Police Department, a lawyer and Haldane parent, also backed the proposal. He said he locks up his gun as soon as he arrives home. “It’s common sense. It’s a deadly weapon,” he said. “I think the law is constitutional.”

Steve Sterling said he had dropped his membership in the National Rifle Association because of its lack of interest in gun safety. A safe-storage law “is not a Second Amendment issue” and “it’s not gun control,” he argued. Rather, “it’s gun safety. Who can possibly have an issue with that?”