In only its second year, city program fills quickly

The City of Beacon summer camp at the University Settlement Camp, which begins its second season July 9, continues to grow. In fact, it has become so popular that the 2018 camp was full within two days after registration opened March 5. (Campers who attended in 2017 were allowed to register a week earlier.)

Part of the appeal of Camp @ The Camp is that “the property is magical,” says Linda Richards, referring to the campgrounds at 724 Wolcott Ave., which were created in 1910 to provide New York City children with an experience in nature. 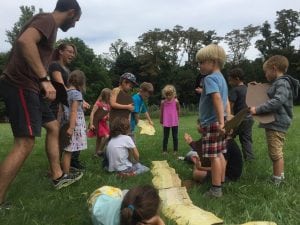 Children at Camp @ The Camp piece together a puzzle that depicts the Hudson River. (Photo by Ilana Friedman)

Richards, who directs the camp with Ilana Friedman, points out “an immense field, a tire swing, indoor classrooms, a gym for when it’s raining, and a gigantic pavilion. It’s a dream camp.”

The Beacon program, designed for campers ages 5 to 11, runs weekdays for five weeks. The cost is $195 per week, sibling discounts and an extended-day option.

The camp also offers a counselor-in-training program for 12- to 15-year-olds and a weeklong introduction for 4-year-olds, both of which have openings. See cityofbeacon.org. An application and interview are required for the CIT program.

Each week of camp has a theme but always includes field games, the writing and performing of music, art, exploration and swimming at the Beacon Pool under the supervision of Nate Smith, the director of aquatics. 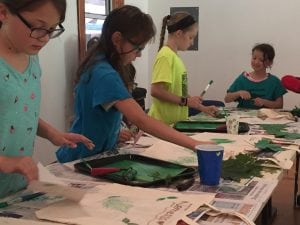 Campers work on a leaf-print project during Camp @ The Camp in Beacon. (Photo by Ilana Friedman)

Each day begins with songs and group games, followed by activities, free play and rest, as needed, Richards says. Guests will include a wildlife expert and a children’s theater company. Parents with skills and talents are also welcome to share.

The idea for the camp came from David Sampliner, a Beacon resident who introduced Friedman and Richards because he thought they would be great as co-directors of a summer camp. As he predicted, they clicked and soon were working with Mark Price, the director of the Beacon Recreation Department.

After funding for the camp was approved by the Beacon City Council in February 2017, the women, along with Heidi Harrison of the Recreation Department, had less than five months to prepare. But finding campers was not a problem; the sessions filled quickly, as happened again this year. “We can’t wait for this summer,” says Richards.

The King of Summer
Local Camps