What do pounds and pounds of clothing add up to?

At the annual Wee Play Ree Play sale, which takes place Friday, April 27, through Sunday, April 29, at University Settlement in Beacon, the sum of the donated bundles of too-small shorts and my-kid-won’t-wear-it jackets will be an expansive playground at Memorial Park. 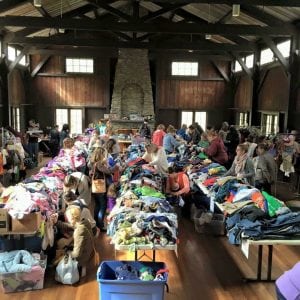 The sale is the major fundraiser for Wee Play, a volunteer organization which, with partners such as the Beacon Recreation Department, the City of Beacon and the Howland Public Library, created a playground at Memorial Park designed for children ages 5 and younger. It also has improved two other playgrounds, at Green Street and Seeger Riverfront parks.

The group is now raising money to expand the Memorial Park playground with more natural elements, climbing options and nature play areas (and less plastic) based on designs by landscape architect Bryan Quinn. Phase 1 of the Wee Woods began in October with the construction of a play area centered around a grove of 50 eastern cottonwood trees. All that remains before Phase 2 begins is the installation of a plaque to recognize everyone who donated funds to buy trees. 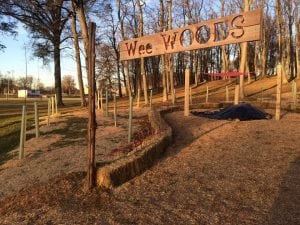 Phase 1 of the Wee Woods is nearly complete (Photo provided)

Phase 2 will include the construction of rope bridges, balance beams, and nature play structures within the woods, in addition to stroller parking.

Wee Play was founded 13 years ago after a grassroots organizing effort by Julann Schwarz, who tacked flyers to telephone poles and recruited other parents of young children. In 2005, the Beacon Recreation Commission voted to fund the Wee Play tot lot.

Raquel Moller Verdesi, who became involved with Wee Play a year after its founding and is now board president and chair of the Ree Play sale, said the first fundraiser was held in a member’s garage and raised less than $1,000. The sale last year brought in more than $13,000.

“It started as a one-day sale and we kept on adding days and hours,” she recalls. This year’s sale will be open from 9 a.m. to 1 p.m. each of its three days. 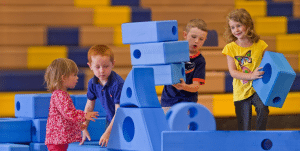 After months of collecting donations, which include sporting equipment, strollers, bicycles, furniture and maternity clothes, along with children’s clothing, toys, games and books, volunteers spend hours sorting and pricing. (No more donations are being accepted for the 2018 sale.) Parents are encouraged to bring their children; a bake sale will be available for tired-from-shopping tummies, large and small.

Following the sale, some unsold items are directed to other nonprofits. For example, children’s books are delivered to the Friends of the Butterfield Library in Cold Spring for its book sale, which begins May 19.

Volunteers are still needed for the sale days, Verdesi says, for set up, posting parking signs, packing up leftover merchandise and other tasks.

There are also many volunteer opportunities throughout the year, she says, such as watering the gardens at University Settlement twice a week in season or lending a hand at classes and play groups at the library and Beacon Rec.

“It’s a wonderful way, especially if you’re new to Beacon and have young children, to connect with others,” Verdesi says. See weeplayproject.org.